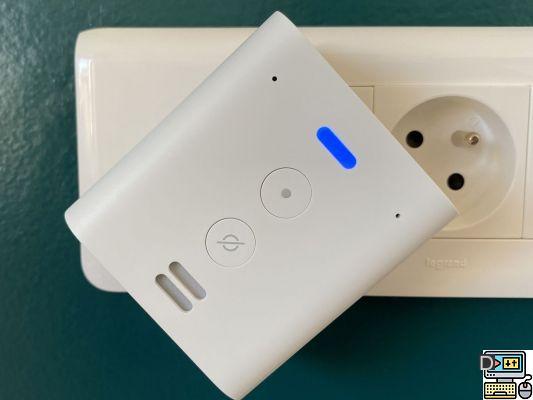 Amazon definitely does not lack imagination to bring its connected speakers (and microphones) into our interiors. After a host of Echo speakers, here is the Echo Flex, a power outlet under Alexa.

The Amazon Echo Flex takes the form of a white rectangular block (72 x 67 x 73 mm for 154 g) weighted with a male mains plug. Two microphones on the front, an LED indicator, an "Action" button, a button to mute the microphones and a loudspeaker adorn its front face. On the right side is an audio output (3,5 mm mini-jack). Below is a USB-A socket. We have the impression that Amazon offers us in a very small volume a concentrate of its know-how in terms of personal assistant. Because if the device is obviously nothing sexy, it is neither more nor less than the latest offspring of the large Echo family integrating the famous virtual assistant Alexa. Sold for €29,99, Echo Flex is even cheaper than the small Echo Dot speaker. Undoubtedly, a real Trojan horse for Alexa to drop off at our home.

Very cleanly made, with impeccable finishes, the Echo Flex seems much cheaper than many power outlets or AC adapters that could physically resemble it. In any case, it is much more imposing. On a power strip, it is preferable to connect it to one of the ends, otherwise it will prevent access to one of the sockets.


After downloading the Amazon Alexa app and creating an account, the device installs with just a few clicks.


All you have to do is choose "Associate a new device", assign it a location (in the kitchen, the bathroom, etc.), and the mass is said. We can blame the web giant for a lot of things, but let's admit that the firm of Jeff Bezos knows how to do it in terms of simplification. Then, it remains to associate the Echo Flex with “skills”, these famous little software dedicated to a product or a compatible brand to personalize its use. These manipulations are within everyone's reach.

A small USB socket that can do a lot...


One of the good ideas of the Echo Flex is undoubtedly this USB-A socket it has. Admittedly, this can be used to charge a smartphone, but rather slowly (7,5 W). Amazon's trick is to have developed accessories that plug under the Echo Flex: a motion detector, as well as a night light (with 6 LEDs that can provide 20 lumens), both sold for €14,99. The idea is good, very good even. If we were not able to test these two modules, we imagine that the first can easily be associated with a scenario (trigger an alarm, switch on lights, launch a sequence of actions) and that the second can prove to be a very useful help at night in a hallway, for example. On the other hand, use of Wi-Fi obliges, the Echo Flex/night light coupling is perhaps not to be used in a child's room. Still, the total absence of a cable on the device is a real asset. Finally comes this little "magical" moment when, for the first time, we say "Alexa"...

"Alexa, do this", "Alexa, tell me this", "Alexa, how much, where, how, why, etc.". Amazon's artificial intelligence is well installed, all that remains is to carry out the first tests. Anyone who has never "played" with an Alexa or Google Assistant personal assistant will obviously have a few hours of fun and test the machine's response capabilities. Those who are already equipped with an Echo speaker will immediately find themselves on familiar ground, the Echo Flex being able to be a first anchor point for Alexa at home, but also – and above all? — an additional element making it possible to extend its field of action if one is already equipped.

The Echo Flex has found a place in our bathroom.

Since the arrival of Alexa in Spain in 2018, the voice detection algorithm is progressing in the right direction. The two microphones housed in the Echo Flex do a good job. In a quiet environment, the voice assistant is triggered and hears our requests perfectly without the need to raise the tone, even in an adjacent room. When there is a little noise (music or TV program in the background, a conversation in the same room), then you have to stand a few meters from the Echo Flex to be understood. We quickly feel the limits of the system in a noisier environment (especially when there are conversations) or when certain elements are in direct proximity (razor in a bathroom, blender in a kitchen.). In these cases, it is then necessary to be less than 1 or 2 m from the Echo Flex and speak in the direction of the device aloud to be understood... or simply cut off the main source of noise if that is possible.

Unsurprisingly, the Echo Flex is not particularly suitable for large rooms: you will certainly need to equip yourself with a second model (or count on a speaker with a more efficient assistant) in rooms of more than 20 or 25 m² (variable depending on room acoustics and Echo Flex positioning), especially if you want to avoid straining your voice all the time.

Considering the size of the item, we didn't have high expectations for the sound performance of the Echo Flex, and fortunately, since it's mediocre. The sound reproduction offered by the single loudspeaker is very centered on the mediums, the precision is poor and the sound power ridiculous. The intelligibility of the voices is still at least assured (still happy given the primary function of the object) to interact with Alexa and follow a podcast or a radio program, but you should clearly not expect more. Forget listening to music. For comparison, its performance is very close to what an average smartphone speaker can offer, and some even deliver a slightly more pleasant listening experience...

It is possible to use the Echo Flex to charge an iPhone.


The lack of power is the first thing that strikes since you have to place yourself at least at 70, 80% of the listening volume to hope to hear the assistant's response, even in a particularly quiet and close environment. This product is really designed for close listening (a few meters to less than a meter depending on the acoustics of the room). The total absence of bass/low mids and treble makes the voices unnatural, very narrow. The lack of precision of the Echo Flex does not help this since it also brings a relatively aggressive aspect to the sound reproduction and makes listening difficult in the long run. Finally, note that there is no volume button, so it is by voice command that we will modulate the sound level.

Amazon has managed to house its Alexa ecosystem in a compact power outlet that can be placed anywhere: in a kitchen, a bathroom, a hallway... Weighted with a loudspeaker, the Echo Flex broadcasts sound from the pitiful quality, barely enough to briefly listen to the news on the radio. The vocation of the Echo Flex will be primarily to answer questions, but also to control compatible connected objects. For music listening, it will be necessary to iron.