App to watch movies for free and in streaming 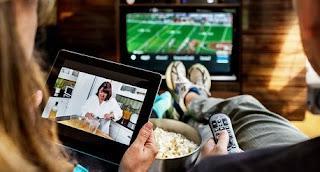 Compared to the past, where to be able to enjoy a good movie we had to go to the cinema or a video store, today there are various online services available that provide large catalogs of video content, even in first viewing or exclusive to the platform.
Instead of accessing the website of the streaming service chosen in a web browser, we can take advantage of the dedicated apps to access the contents, so as to obtain the highest quality and the best video rendering.
While in another article we saw what the best sites to watch streaming movies, here we will see together the best apps to stream movies from Android devices and Apple devices (iPhone and iPad).
In the guide we will show you both free apps and subscription apps, so that we can better choose according to our needs.


App to watch movies for free

In this part of the guide we will show you all the apps that allow you to enjoy free video content, with and without registration.

The first app we recommend trying is RaiPlay, free, available for download for Android and iOS from here -> RaiPlay (Android) e RaiPlay (IOS). 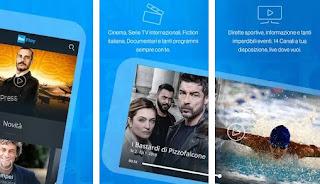 Once you have downloaded the app simply open the side menu and click on the section Videos, where we will find a vast collection of films (divided into categories and genres) broadcast over the years on Rai networks and visible without any time limit. Once you have chosen the movie to view, just click on the symbol Play to start playback. 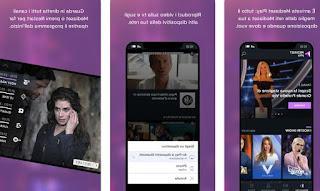 By downloading the app on the device we will have access to all the free films in the catalog, just click on the Explore button at the bottom right, then click on Videos.
To be able to view the films correctly, however, the free registration of a Mediaset account is required; we can create it quickly from within the app (by clicking on the Login button) or from a PC using the link here -> Register Mediaset account.

Another free app to watch streaming movies, TV series and above all Japanese cartoons and anime is VVVVID, available for download from here -> VVVVID (Android) e VVVVID (IOS). 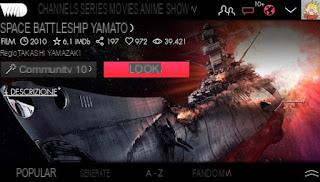 To access the app we need a free account, which can be registered directly from the app or from the website accessible here -> VVVVID registration.
Once the account is registered, enter the credentials in the app and go to the section Videos, so you can view the list of available films (most of Japanese origin). To search for new movies we can take advantage of the categories present at the bottom of the app, choosing by genres, by letter of the alphabet or by choosing the most popular.

Among the free apps to watch some movies in streaming we also point out Popcorn TV, available only for Android from here -> Popcorn TV. 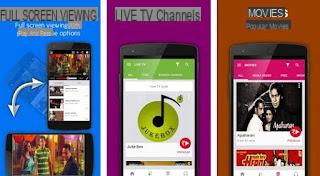 The films are accessible without registration, just go to the section Videos o Movie, choose the movies to play and click Play to start it. The collection is very sparse and there are many old films, but if we like films made in the past it could be a good alternative to renamed services.

From this list we must obviously exclude all sites that illegally upload movies to platforms such as Openload or Streamango, which are always illegal.

In this section of the guide we will show you the apps that require a subscription payment or that allow you to rent or buy films, so you can watch them without limits (in the case of subscriptions, the films will be viewable as long as the subscription is paid). These are the best apps, where we can also find famous films or films that have had a great success in the cinema, but as mentioned we will have to take into account the costs for the subscription, for the payment of the rental or purchase.

Netflix is today the most used app for movies and TV series.
This app requires the payment of a variable monthly subscription and the specific app can be downloaded from here -> Netflix (Android) e Netflix (IOS). 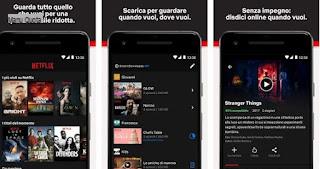 We can choose between three types of subscription from € 7,99 (change the quality and the number of devices that can access at the same time) and have immediate access to all the films in the catalog, which is constantly updated. If we want to try the service before signing up for a subscription, Netflix offers a 30-day free trial, just enter a valid payment method immediately (the renewal will be automatic, it's up to us to choose whether to block it or continue).
With the app we can see Neflix on TV, even if we do not have smart TVs, using dedicated devices to be connected via HDMI.
Furthermore, unlike other apps, Netflix allows you to download movies to watch them offline, so you can watch them on your smartphone or tablet even when we don't have Internet coverage. 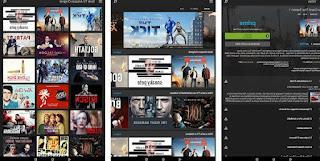 The beauty of this service is that (for now) the Amazon Prime Video is included within Amazon Prime, that is the subscription to Amazon's fast shipping service: paying only 36 per year we will have access to numerous services including the video platform. As mentioned, the films present are not very recent, but Amazon is constantly updating the catalog to make it attractive to all fans.

3) Disney Plus
Disney + is the streaming platform for Disney and Pixar animated films, Marvel superhero films and where you can see the great Disney classics, the entire Simpsons series. You can download the Disney Plus app for Android and for iPhone or iPad. The subscription cost is 7 Euros.
In another article we saw the comparison between Netflix and Disney Plus.

NOW TV it is another excellent service for watching streaming movies from a mobile phone or tablet, since it relies on the Sky platform (but without a dish) for the distribution of content.
We can download the NOW TV app from here -> NOW TV (Android) e NOW TV (IOS). 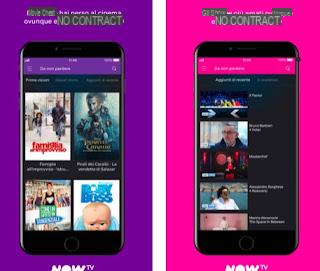 Currently the catalog of films is very rich (perhaps the best among all the apps tested), in fact we can find films recently released in the cinema and great international successes, visible without any problem or without any limit. In addition to on-demand content, we can also access selected Sky Cinema channels, which can be viewed in streaming without the aid of the dish. In order to access the services of the platform we will have to pay a monthly subscription, distributed by ticket: the single Ticket Cinema (valid for viewing on-demand movies and Sky Cinema channels) costs € 9,99 per month, to which we can add the + Option for € 2,99 per month to be able to access high definition and simultaneous viewing on two different devices.
In any case, we can cancel at any time without penalty and, for the skeptics, a 14-day free trial of the service is offered, so as to evaluate whether to subscribe or not. 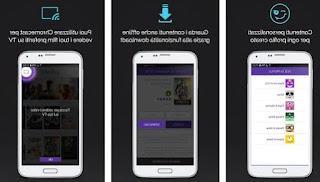 Once installed, we will have access to over 6000 films, many of which are exclusive, in particular those released by Universal Studios and the Medusa films (by Mediaset itself).
The app also allows you to save movies offline to watch them offline and to project the content to a Chromecast, so as to view them on a TV.
The Infinity subscription costs € 7,99 per month and allows you to take advantage of a free 30-day trial, with no restrictions or penalties.

With the apps seen so far we will have access to the entire catalog of films simply by paying a monthly subscription; but if we wanted to rent a movie online for a short period of time or even better to buy it, we can use one of the following apps.

- Google Play Movie (Android) (iOS): available to purchase and rent movies with prices starting from € 2,99.
- CHILI (Android) (iOS): another app where you can rent films, many of which have been released a few months ago at the cinema.
- YouTube: even the YouTube app allows you to rent and buy legal movies, you just need to reach the right channel and use the payment methods provided by Google Pay.

App to watch movies for free and in streaming