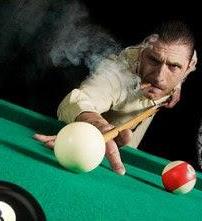 The review of online sports games continues on freeverything.com, after having seen automobiles, online golf and football, let's see, in this episode, billiards.

The 3 requirements to be top games in this blog are always the same: to be free, multiplayer to play online against other people all over the world and have beautiful 3D graphics. Mathematics, precision and steady hand are the success factors of billiards and are replicated virtually but faithfully by these excellent video games.
For those who cannot spend their time in a gambling den with many verse tables, surrounded by clouds of smoke, with no women around and with a cue in their hand (said so it doesn't seem so attractive ...), this desire can be satisfied. smoothly with a computer connected to the internet. Of pool games for PC there are several, but if you only look at quality free titles the choice is limited.

1) Real Pool 3D - Poolians, which can be downloaded for free on Steam, is undoubtedly one of the best 3D pool games for PC and is by far the best free one.
There are many game modes and variants of Billiards: 8 Balls, 9 Balls, Snooker, a particular game played in Great Britain and Ireland. You can play alone against the computer or in multiplayer mode against other players from all over the world.
The graphics are wonderful and all in three dimensions with a realism that leads the player to experience a real game of billiards. The strong point, however, is there game physics and the sensitivity that is perceived when the ball is touched with the cue with a remarkable yield of the friction of the table and the trajectories that the hit balls take. The player moves the cue as if it were real, deciding not only the power of the shot and where to hit the white ball but also the angle of the shot, the exact place where it is hit and the effect to give to the shot.

Another important feature is the Multiplayer that make the game a sports MMO where you have to grow, gain experience and improve skills in order to challenge the strongest players and become the number one in the world. All the other players are therefore not guided by a computer but are other people who are in front of the PC, all with the same goal.
2) 8 Ball Pool by MiniClip is one of the most popular online games for years, simple, with a view of the table from above. The greatest advantage of this game is that you can play without account registration and without downloading anything, directly from the browser and directly against another connected player.
8 Balls Pool is also the best game of Billiards on Android iPhone and iPad 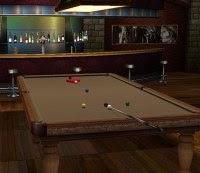 2) Carom3D is a long-standing 3D pool game, still downloadable on PC, with multiplayer games. Although much inferior to Real Pool 3D, it is simpler to play

From the point of view of graphics and physics, we are always at the highest levels, completely in 3D and with an atmosphere and an absolutely true movement with a realism unthinkable until recently, at least for a free and free game. After a few training matches you can start challenging some other players or having an organized single elimination tournament. Matches can also be recorded to review and study mistakes and winning strokes.

Other simpler and more immediate pool games to play online are 8 BALL BILLIARDS CLASSIC, to be played directly from the browser and 3d Pools. both of these games can be played one-on-one on the same computer or alone.