Bluetooth LDAC, Apt-X HD, SBC: everything you need to know

Speaking of wireless headphones on mobile, you have probably come across descriptions of Bluetooth audio “codecs” such as LDAC, Apt-X or even SBC. But what matters when you want to enjoy your music with wireless headphones, and what do all these barbaric acronyms mean? Our file explains it in detail. 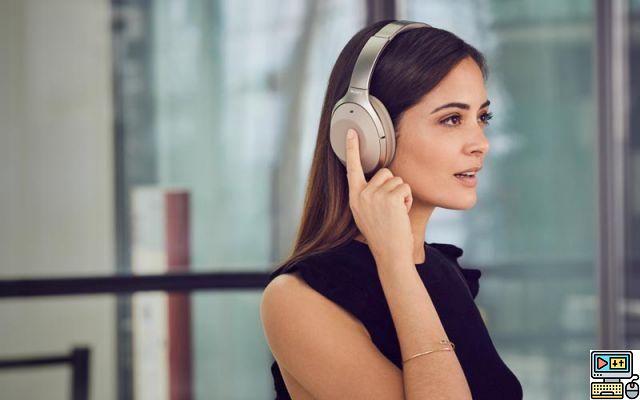 The jack has unwittingly become the new enemy of manufacturers, since Apple decreed its outright disappearance on our smartphones. The last champions to always put it forward will gradually put it away over the next few months, as is always the case in this market which follows trends very aggressively.

If even Google ditched it with the Pixel 2, LG continues to give it some love with the V30. But one thing is certain: the war has already been won, which implies a massive switch to the various wireless earphones and headsets available on the market. However, there is always a concept in this field that is difficult to understand at first sight.

These extraterrestrial acronyms that surround headphones: LDAC, Apt-X HD, SBC… what does it all mean, and how do you really tell one good wireless headset from another? For this, this file will focus not only on explaining the ins and outs of sound in Bluetooth, but also the meaning of these certifications.

How does Bluetooth audio work?

You are most likely already aware of the fact that the majority of sounds you listen to are actually compressed. The various music streaming platforms do not offer you lossless recording, due to the weight of the data passing through: these files are compressed by what is called a "codec", abbreviation of encoder/decoder, which is responsible for compressing the sound.

Generally, it takes care of identifying the inaudible frequencies to remove them, in order to lighten the final file. The stronger the compression, the more naturally the sound quality is impacted since frequencies that make the sound rich are removed in the process.


If audio purists are not big fans of Bluetooth headphones, it's quite simply because a second compression takes place when using wireless headphones: that of the transmission between your smartphone (the transmitter ) and your headphones (the receiver). However, there are some subtleties to be aware of in this process.

When you pair a headset to your phone, a first contact is made between the two devices which will reveal their respective capabilities to each other. They will then adapt to these capabilities to provide the best sound possible, of course. However, the environment also plays a role: if you are surrounded by interference, the couple will automatically take care of switching from light compression to strong compression in order to compensate for their difficulty in communicating in this situation. That's why the quality of your listening may vary on the go. 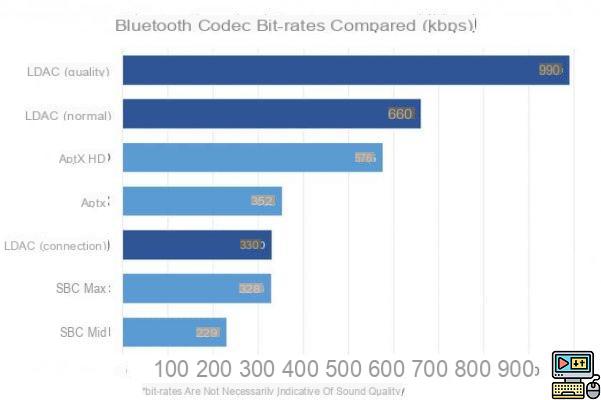 It is precisely under these conditions that the famous acronyms LDAC, Apt-X, Apt-X HD and SBC come into play. These are the famous codecs that take care of the wireless transmission between your transmitter and your receiver. Based on Bluetooth, they define the maximum possible audio quality but also the way the signal is managed according to the conditions.

Naturally, these codecs are not equivalent: the codec capable of sending the best wireless audio quality does not necessarily guarantee the best adaptation to the immediate environment, and vice versa. In addition, these codecs are not necessarily available for all devices, some may for example be proprietary and therefore limited to a specific brand.

When buying a new headset or a new Bluetooth speaker and a new smartphone, you must therefore find out about the codecs supported by them. Naturally, you will have to find the same codec on the transmitter as the receiver to be able to benefit from it. Here are all the current important codecs, and their specificities.

LDAC is currently the best audio codec available for audio over Bluetooth. Developed by Sony and using the Bluetooth 4.0 standard, it allows the transmission of a CD quality audio file (i.e. 16 bits / 44.1 kHz) without transmission deterioration… if your immediate environment allows it of course. A transmission in 24 bits / 96 kHz is even possible, on the condition of accepting a minimum of compression.

It has 3 different transmission modes, with which it naturally juggles depending on your environment: quality, normal or connection. The quality mode can exploit a bandwidth of 990 kbps, the best currently, the normal mode drops to 660 kbps (still in the best) while the connection mode (which favors signal stability) drops to 330 kbps. Signal compression is dynamic and environment dependent.

This codec being proprietary, only Sony devices could use it between them, making the best current audio codec usable only with Xperia and the manufacturer's computers for a very long time.

Fortunately, the LDAC codec is now integrated directly into Android 8.0 Oreo's AOSP, which should make it much more universal... if you use the brand's headphones or if competing manufacturers agree to pay the royalties. to use it, its integration of our transmitters (here, all smartphones running Android 8.0 Oreo) does not guarantee compatibility with our receivers (headsets, speakers, etc.).

Apt-X / HD, the most widespread and owned by Qualcomm

The Apt-X codec was designed by CSR and integrated directly into its Bluetooth chips. The company was subsequently acquired by Qualcomm, which developed the Apt-X HD. This new codec aims to be the direct competitor of Sony's LDAC, and benefits from a much larger installed base. Most of the current medium and high-end headphones use it, and the majority of devices are compatible with this codec.

It can transmit audio data at 24 bits / 48 kHz, which is less than Sony's LDAC. It is mainly on the bandwidth that it sins, because it reaches “only” 576 kbps. It can naturally switch to classic Apt-X, which supports audio quality close to CD at 16 bits / 44.1 kHz with compression, however unlike LDAC, for a bandwidth of 352 kbps.

Where the Sony codec adapts its bandwidth to the immediate environment and the connected device, the Apt-X (HD variant included) is a fixed bandwidth codec so that the sound quality will always remain the same.

Finally, there is the SBC, which is somewhat the default option for our smartphones when the connection is no longer sufficient to take advantage of the Apt-X or the LDAC. This is the free codec enabling audio over Bluetooth, which allows a maximum bandwidth of 328 kbps and 229 kbps in the medium setting. The compression is obviously present, but remains bearable. This is really only used as a last resort by devices, its universal character helping it to retain a minimum of interest.

Which codec to prefer for your Bluetooth audio headphones?

By reading these few lines, it seems obvious that it is better to favor the LDAC which remains the best audio codec currently available. However, it must be understood that these codecs remain relative to the use you will make of them, which implies that it is not necessarily worth it to limit yourself exclusively to this codec under the pretext that it is the best. .

Most users of Bluetooth headphones use them in conjunction with popular streaming services like Spotify, Google Play Music or Apple Music. However, these 3 services offer a maximum quality of 320 kbps and many people do not even take advantage of it and settle for the basic settings of around 256/192 kbps to facilitate listening on a 3G/4G connection.

So, absolutely wanting a premium codec like LDAC to end up listening to already compressed audio isn't really worth it. Similarly, those who prefer to listen to their music without loss in FLAC will very naturally turn to wired headphones which are not subject to this compression, as a bonus to phones equipped with high-performance DACs to maximize their listening.

But in a world where the jack is more and more passed to the trap, it is good to know these notions in order to be able to better orient oneself. True audiophiles forced to go wireless will turn first to the LDAC so as not to offend their absolute ears, while lovers of good quality music can turn to the Apt-X / Apt-X HD without feeling it. If you are not sensitive to this, you can completely overlook these notions since the SBC has your back: just know how to keep them in mind if you feel like upgrading to higher quality.

add a comment of Bluetooth LDAC, Apt-X HD, SBC: everything you need to know