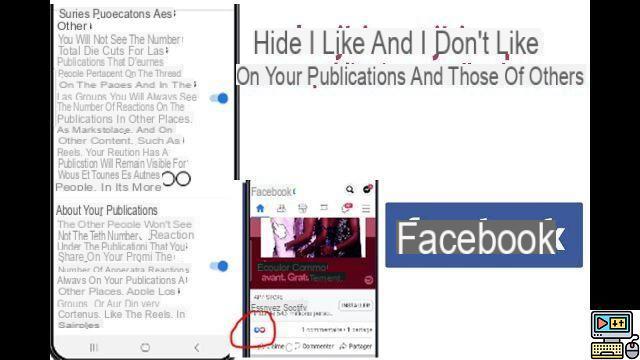 Facebook has started testing a new feature on the social network: hiding likes on posts. Only the author can see the number of people who have pressed the famous like button, his friends cannot access the information. The tests have started in Australia and Facebook intends to generalize this change if the experimentation proves conclusive.

Clues had announced it for several weeks. Facebook has officially started testing a modification consisting of hide number of likes on the publications and it is for the well-being of the users of the social network according to the company. Some users in Australia will no longer see the number of people who liked posts that pass through their newsfeed.

Why Facebook hides the number of likes on posts

The reasons behind this novelty are the same ones that were mentioned when Facebook started the same tests on Instagram a few months ago. Studies have shown that thehe likes have a negative impact on the well-being of users. Indeed, many people are under constant psychological pressure related to the reactions to their posts on social networks.

Few likes on a photo or a publication would thus create discomfort or self-confidence problems, especially among the youngest. Even more when they compare these reactions to those collected by some of their friends. Facebook says it is aware of the negative impact of this particularity, which has nevertheless contributed to the popularity of the social network.

In reality, it is more the visibility of the number of likes by everyone that puts the pressure on most users. Facebook decided not to be radical in removing the button. This will still be accessible, but only the account holder will be able to see the number of "likes" on his publications.

Mark Zuckerberg's firm is not the only one to have a similar position. The creator of Twitter recently explained in an interview that if there was one thing he regretted, it was the like button on the social network. For now, the changes made by Facebook are at an experimental stage that only concerns Australia. Depending on the results, this new feature will be extended to all countries.

Facebook allows you to turn off videos from autoplaying in your News Feed. It's very simple, even if the path is not obvious to anyone who has never seen it...Facebook Messenger has been using end-to-end encryption since 2016. To take advantage of it, just start a secret conversation with one of your contacts. Still need to know… When you use Instagram, your contacts can know that you are online, a small green circle appearing on your avatar. Except that you might want to survey the application in all… Instagram allows you to activate double authentication so that you no longer depend solely on the security of your main password. A way to significantly strengthen the protection of your account...
Audio Video Facebook starts hiding likes on posts
Facebook: how to activate dark mode on Android, iPhone, PC and Mac ❯