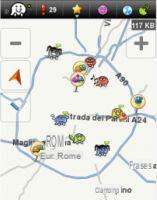 Satellite navigators can now be used on all new Smartphones and mobile phones and have practically solved the problem of the best route to get to any destination by car. The strength of the satellite navigator lies in the gps which detects the geographical position anywhere in the world and, thanks to street maps, allows the software to always find the shortest or fastest route. All of this is nice, unless there is traffic, which no satellite navigator can yet predict and report. The large software manufacturers for satellite navigation and mobile phones such as TomTom provide a real-time traffic information service, however, for a rather expensive subscription.
Nowadays it is also very popular in the city Waze, free gps navigator for smartphones, which allows you to check, via gps and via the internet, real-time traffic on the roads from all over the world and also the in your languagen ones.


I am not talking about the traditional websites on which to see the traffic situation in real time, however still very useful but just of a program to install on mobile phones and completely free.
Especially those who live in cities like Rome and Milan, where most of the time is lost in traffic, stuck in congested streets, must absolutely start using Waze.
Waze is also perfect for searching gas stations with the lowest price, with user reports.
Waze it's a completely free satellite navigation software and without subscriptions it provides a real-time traffic overview.
Waze can be installed on mobile phones and smartphones Android and IPhone as well as Windows Mobile, Symbian and Blackberry, which support GPS navigation.

Waze is structured as a social network, there is no central authority that informs about road traffic, all of them the measurements are provided by the motorists themselves who share them online. All users who register become wazers, they inform themselves about traffic and communicate (automatically) their situation in case they are bottled up or stopped in a queue on some road or motorway. I would therefore like to advertise enthusiastically for this new service because if it were used by a thousand people in every city, it would become really useful and essential to know how traffic is proceeding, in real time. After downloading the application for your mobile, you enable the GPS and it shows the map which is constantly updated according to the surveys sent by other users.
The application learns intelligently according to the data collected via gps anonymously and based on the information that is sent.
Basically, depending on which road you take, if you slow down too much, a red line appears behind the car drawn on the Waze map that everyone else sees. In the event of an accident or a road block due to work, then it is possible to intervene manually and report this block. If the machine is stopped, it is automatically enabled the chat (provided by Chit-Chat) with which you can chat and communicate with other users.

Waze is also free because it does not use proprietary maps, there is no Google Maps underneath and not even Teleatlas (Tom Tom) or Navteq, the maps are drawn directly from the movements of the users, in semi-automatic mode. Waze's intelligence lies in tracing the roads on the map by himself following the route one takes with the car. By summing up the various experiences of the wazers and processing the information in a coherent way, the maps update themselves continuously always providing the real situation and, without the risk of finding oneself with changed one-way streets or roads closed for work.
From a technical point of view Waze is a little gem that works like most gpd road navigation software. The graphics are basic but very nice and nice to see both 2d and 3D. There are voice commands although limited to "turn right" or "turn left". There are POIs or points of interest, including Speed ​​Cameras, the presence of brigades, patrols and breathalysers that are reported by users. It can send a photograph directly on the social network about the road situation in which you are. There is also a social localization game where you get more points you travel and turn different roads. Like any satellite navigator, also calculate the best routes to get to your destination by car.

The Waze Live Maps you can too watch over the internet from your pc, to check the traffic and see the surveys sent by users via the internet (not by GPS).

In short, if you have one of the supported mobile phones or smartphones, do not hesitate to access the download on Waze and to install this free navigator capable of giving traffic information in real time and becoming a fun social pastime when you get stuck in traffic.
In 2013 Waze was bought by Google for a billion dollars and some of its functions are now integrated into Google Maps (see: Route preview on Google Maps, info on accidents and road works and photo tours)