How to convert Roman numerals

Let's start with online services. Below you will find a slew of useful tools that can be used directly and comfortably from any Web browser that you can use to make your conversions from the Roman numbering system to the one currently and commonly used. They are all free. 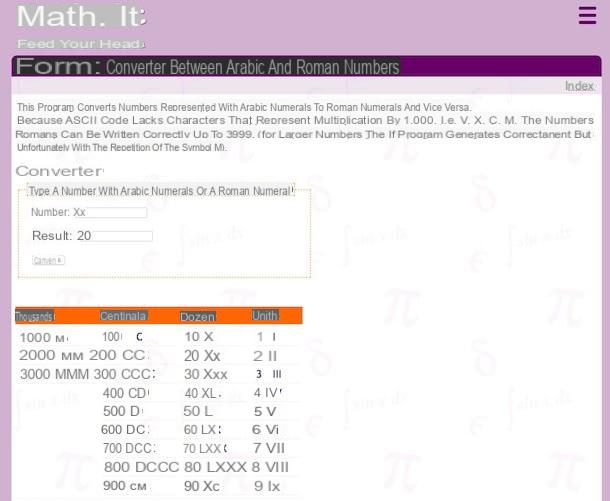 The first Roman numeral converter I suggest you try is the one attached to the website Math.com. Thanks to this service you can therefore convert Roman numerals with those represented with Arabic numerals very quickly.

To use it, connected to its home page, type in the field next to the item Number: the Roman numeral you want to convert and then presses the button Converted. Next you will see the result of the conversion in correspondence with the field Result:.

If the thing is interesting or in any case for further information, at the bottom of the page there is also a form in which the Roman numerals are clearly indicated, divided into thousands, hundreds, tens and units with the relative Arabic representation next to it. 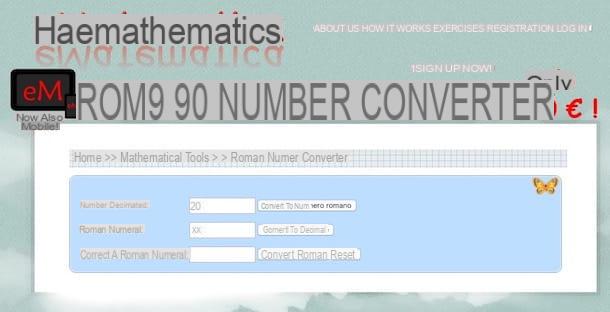 Another converter you can turn to is the one on the website of eMathematics. Also in this case it is a very simple tool to use. It not only allows you to convert Roman numerals to Arabic but also does the reverse.

To serve, connected to the main page of the site, fill in the empty field that you find in correspondence with the wording Roman number: with the Roman numeral you want to convert and presses the button Convert to decimal. You will then see appear, corresponding to the item Decimal number: the result of the conversion.

If you want, you can also use the last field to correct incorrect Roman numerals. Eg, MDCCLVVIV (1759) is wrong. So, by inserting it in the field next to the item Correct a Roman numeral: and then clicking on the button Convert to Roman you will see the relative correction appear in the field corresponding to the Roman numeral: item.

Another tool that I think is the case you should consider is the Roman Numeral Converter and Test. It is a Web service through which you can not only convert numbers as seen with other online resources but also do quick exercises to test your understanding of the Roman numerical system.

To use the number conversion tool, linked to its web page, locate the box Conversion on the left and fill in the field below the entry Number: with the Roman number that you need to convert into Arabic then click on the button Go. Once this is done, you will see the result of the conversion appear in correspondence with the item Arabic: below.

If you need, you can also perform the reverse operation, i.e. you can fill in the field under the item Number: with an Arabic number, click on the button Go and display the respective Roman numeral in correspondence with the wording Roman:.

As for the exercises, use the box Test placed on the right and try to carry out the conversion of the Arabic or Roman number that is proposed to you in mind (if you use the converter located next to it, it doesn't make much sense ...) then click on OK. The bottom part also shows the percentage of correct answers and the exact number of right and wrong conversions.

Finally, I would like to point out that on the left side of the site you will also find a simple form that can be useful for a better understanding of the numerical system of the ancient Romans.

If you prefer, you can make all the necessary conversions using special software to download and use directly on your computer. Almost all of them are free and there are for both Windows and Mac. Read more to learn more. 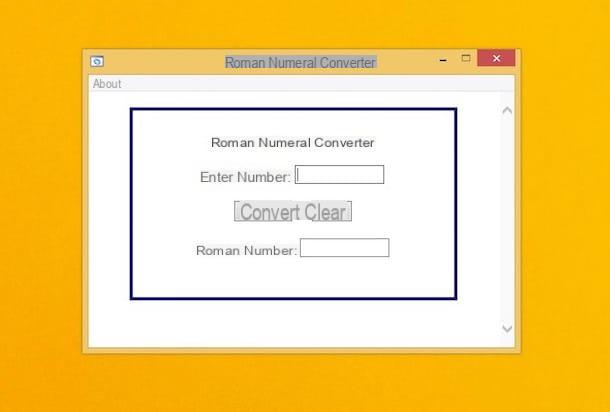 A PC was used with its installato Windows 8 / 8.x or earlier and you are looking for a Roman numeral converter I suggest you turn to the free program Roman Numeral Converter. It hasn't been updated for a while (but continues to be perfectly efficient and functional) and only allows you to transform Arabic numbers into Roman and not vice versa. It is in English but being very simple to use it shouldn't be a big hindrance.

To immediately download it to your computer, connected to this Web page, click on the button free Download which is on the right and then on the button Alternative downloads placed at the bottom of the new page that is shown to you.

Therefore, wait a few moments for the program window to appear on the desktop, then fill in the field next to the item Enter Number: with the Arabic number you want to convert into Roman, press the button Convert and displays the corresponding Roman numeral by giving one looked at the field next to the entry Roman Number:.

To remove the numbers in all fields, just click on the button Clear. 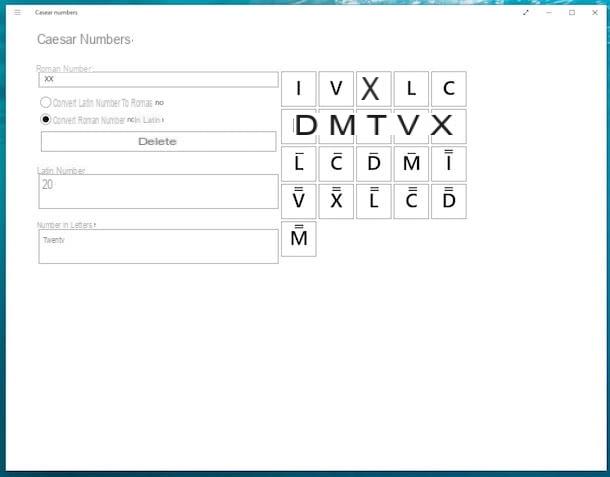 If you use a computer with su installed instead Windows 10 you can contact the application Casear Numbers. It is free, downloadable directly from the Microsoft Store and also very practical.

To use it, visit the relevant web page, wait for the Microsoft Store to open on your computer (and if it doesn't, click on the button Download the app) and then click on the button Get and waits for the download and installation procedure to be started and brought to an end, then presses the button starts.

Once the Casear Numbers window appears on your desktop, select the option Convert Roman numerals to Latin, check the box below the item Roman numeral which is at the top and use the buttons on the right to type your Roman numeral.

Once this is done, you will see the conversion automatically appear, both in numerical and written form, in the boxes below the items Latin number e Number in letters.

If you want, you can also do the reverse. To do this, select the option Convert Latin number to Roman, type the Roman number in the field at the top using the buttons on the right and wait a few moments to see the result of the conversion appear at the bottom.

In all cases, to clear all fields just click on the button instead Clear. 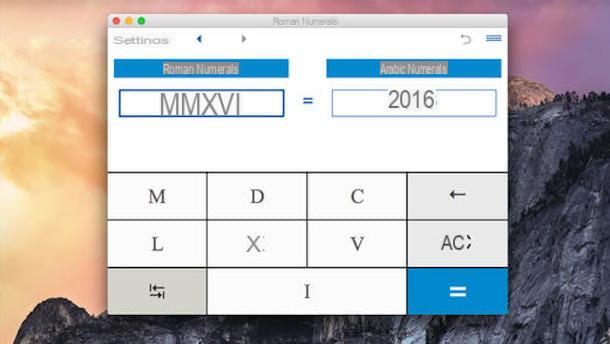 Stai is invented using a Mac, more turn to the application Roman Numberals - Roman numeral converter. It is essential but really well done, it is available in cittàn and also offers a minimum margin of customization. It is not free but costs € 2,29 and can be downloaded directly from the Mac App Store.

Then access the Launchpad and start the application by pressing on its icon. Once the program window is displayed, fill in the field corresponding to the item Roman numbers with the Roman numeral you want to convert into Arabic using the buttons below, press the button = (equal symbol) and you will immediately see the corresponding Arabic number appear. To reverse the procedure, click on the button with the two arrows at the bottom left, while to clear the fields click on the button AC.

If you want, you can also change the color of the program window. Just click on the item settings at the top left, select the color you prefer from those available under the heading Appearance and press the button OK. 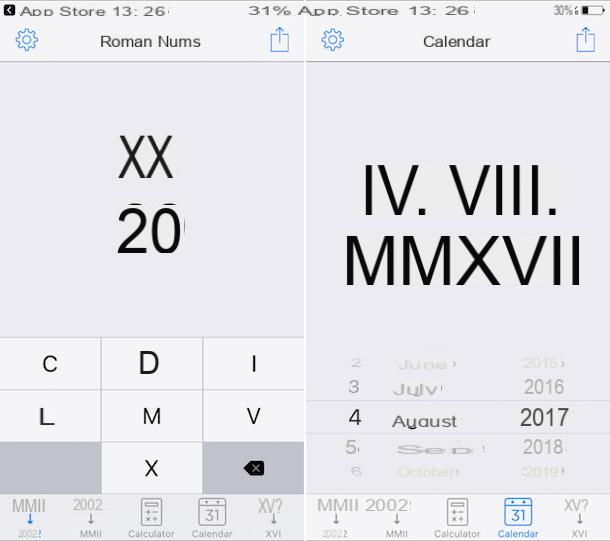 To conclude, I want to point out those that in my humble opinion represent some of the apps for smartphones and tablets that I prefer capable of fulfilling the purpose in question. You can find them all indicating in the following list.

How to convert Roman numerals

add a comment of How to convert Roman numerals