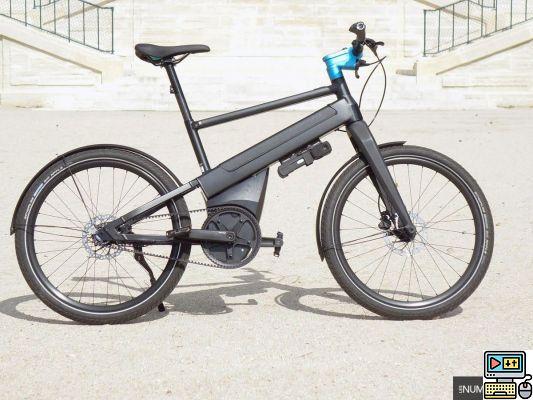 The iWeech electric bike is connected and intelligent to modulate its autonomy and assistance according to the route. It is also intended to be practical with a rotating stem and retractable pedals. The right approach for an urban VAE?

The iWeech bike is quite unique on the market since it brings together a very large number of technologies in a two-wheeler that is ultimately very easy to use. Unlike an Angell which puts a large part of the experience on its touch screen and its accessories, the iWeech is completely stripped of counters and buttons, leaving the user to straddle his mount and roll.

The bike uses a single-speed carbon belt drive, 250W Brose T mid-motor delivering 90Nm of torque, 24-inch wheels with wide ball tyres, hydraulic disc brakes and a removable 497Wh battery. for an announced autonomy of 90 km. The iWeech also stands out from the competition by the integration of a rotating stem and retractable pedals which limit its size in the parking position. On the connectivity side, it has wifi, Bluetooth, NFC, GPS and 4G. The smartphone app allows intelligent power management to preserve the battery depending on the route, the activation of the alarm and the location of the bike.

Available in matte black, anodized gray or pearly white, the iWeech is sold directly on the manufacturer's site for a price of around €3000. It is also available from Decathlon which, a very positive point for a bike normally sold only online, also takes care of the maintenance of this model. iWeech offers an optional front rack tray for €90 and an Abus Bordo X-Plus 6500 lock with bracket for €130. Mudguards and stand (side or central) are standard.

The iWeech is in direct competition with other connected urban bikes on the market, such as the VanMoof S3, the Cowboy and the Angell.

The iWeech bike in its black version.

Stand and fender as standard.


With its 24-inch wheels and aluminum sloping frame, the iWeech electric bike is rather atypical. Visually, it seems picked up and yet you quickly feel comfortable on its handlebars. It is available in one size that will fit people between 1,60m and 1,90m tall. It is possible to raise the stem by 1,5 cm and to opt for a handlebar raised by 4 cm when ordering in order to have a slightly more upright riding position. We weighed the iWeech bike at 20kg with the kickstand and anti-theft mount.


The iWeech uses a carbon belt from the manufacturer Gates. This type of transmission offers several advantages such as the absence of grease - and therefore maintenance reduced to a minimum -, as well as the assurance of not getting dirty. The manufacturer also announces a very long lifespan (more than 20 km). On the other hand, the adjustment is a little more complicated than with a simple chain, especially if you have to change the inner tube following a puncture, for example, and the spare parts are not standardized (chainring and sprocket ).


While these main competitors opt for a hub motor, the iWeech bike adopts a 250 W Brose T central motor that can deliver a very high torque of 90 Nm. The side stand is stable, but placed too close to the crankset. For a size 44, the heel of the shoe comes up against the crutch, which is particularly disturbing. Fortunately, iWeech offers an alternative center stand on request.


This bike has a rotating stem that allows the handlebars to rotate 90° by simply pressing the button on the stem. The pedals are retractable.

Turned handlebars and folded pedals, the bike is less bulky.


Once placed against a wall, the bike thus occupies only 35 cm in depth, a serious gain in space compared to the 56 cm wide handlebars.

Front and rear, the iWeech is equipped with Supernova LED headlights with a high power of 205 lumens, more than enough for urban and even extra-urban use. The lighting of the lights is automatic according to the ambient light (the sensor is placed on the bottom bracket), but the lights can also be switched on or off manually via the app. We regret the absence of a dedicated button or a simple shortcut via the main button.


The removable battery is locked by a key. It has five LEDs that indicate the state of charge when switching on the bike. It is possible to charge the battery alone or directly on the iWeech.


iWeech has the good idea to provide two NFC badges to activate the anti-theft system without having to use the smartphone application. Thanks to the integrated accelerometer, the anti-theft system beeps as soon as the bike is moved, then it starts ringing. The alarm volume is decent, but probably won't put off the most determined thieves. After the third warning, the alarm sounds as long as the bike is moving and the system sends a notification to the smartphone with the position of the bike every 4 min. It is possible to follow the bike in real time on a map thanks to the integrated GPS. This service is free. For information, the whole system is managed by a Raspberry Pi.

The one and only iWeech button.


The iWeech has only one button which ultimately serves very little. In practice, the bike is always on standby and switches on automatically as soon as you get on it. This button is used to switch from iRide mode to Free Ride mode (double-click), or even to switch to eco mode (single click). We will come back to this in the section on driving.

Regarding pure comfort, there is no suspension on this bike: you have to be content with Schwalbe Big Apple tires with large balloons (section of 2 inches or 50 mm) which, inflated to 3 bars, nevertheless manage to erase the roughness of the road effectively. and even cobblestones. They are well helped by the carbon fork, a material appreciated for its ability to filter vibrations and some of the small shocks. The saddle has a sporty profile ideal for long pedaling, but the bike is sorely lacking in cushioning on the rear part. In the absence of rear suspension, we would have appreciated a suspension seatpost.


No speedometer or button: the bike's handlebars go straight to the point, simply equipping themselves with Ergon Grip GS1 handles and hydraulic disc brake levers. Nothing is done to distract the cyclist who can concentrate exclusively on the road. For the test, iWeech provided us with a universal support for Shapeheart smartphone (the small magnetic support on the right of the handlebar associated with a universal pocket), but no support is distributed as standard.

On the handlebars, it's pure pleasure. We are not yet at the level of a Canyon Roadlite:On, which is lighter and more responsive, but the sensations are excellent and the Brose engine is much more punchy. The bike remains responsive. The power of the engine propels us very quickly to 25 km/h and even allows us to go beyond that. The 24-inch wheels bring some liveliness to the bike, especially compared to a model with 28/29-inch (700mm) wheels.

On the flat, the transition between the clamping at 25 km/h and a higher speed is very smooth and allows a maximum speed of 32 to 35 km/h by pushing the pace (more than 80 rpm). This pace remains high and quickly tiring, but on a good day, it allows you to exert yourself and sweat a little. We kinda regret the absence of an integrated speed hub that would allow you to maintain a steady pace (more than 30 km/h) without having to grind and therefore increase the cardio. The gear chosen is versatile and allows you to face slopes of 20% while maintaining a speed of 15 to 20 km/h. For steeper hills, you have to stand up on the pedals.

The Tektro HD-T275 hydraulic brakes combined with 160 mm discs provide effective braking. We were able to stop the bike launched at 25 km/h in less than 3 m on dry ground. The brakes are well aided by the large-balloon Schwalbe Big Apple tires that ensure a wide contact patch with the ground.

If the application is not used, the power delivered by the motor is proportional to the force exerted on the pedals. On the other hand, once the destination has been saved in the app, the engine will modulate its power according to the distance to be traveled and the remaining range. If there is enough battery to make the trip with maximum power, no problem. If the bike considers that there is not enough range, the motor power will be reduced. This feature is very practical when you want to make a fairly long trip and the battery is not charged enough, typically when you have forgotten to feed it. The power is then reduced on certain portions to finish the journey without incident.

The iWeech also learns daily journeys and automatically becomes intelligent when it finds itself on the commute to work, for example. When the bike is in iRide smart mode, the power button is blue. In FreeRide mode, it is green. A double-click switches between modes, while a single click switches to eco mode manually. The power is then limited and the autonomy almost doubled.

The iWeech electric bike has a BMZ lithium-ion URV7 36 V 13,8 Ah, or 497 Wh, battery. It weighs about 3,02 kg and is perfectly integrated into the frame. With little wind, rather mild weather and a temperature around 20°C, we were able to cover about 60 km in Free Ride mode. The course was essentially flat and the cyclist, fully equipped with backpack, weighed 80 kg. Autonomy is good, but the Brose motor seems more greedy than Bosch models, for example. Indeed, the Cannondale Adventure Neo 3 EQ achieves the same range with a battery of only 400 Wh and a higher weight. The engine of the latter is however less torquey (50 Nm max.).

Below 10% battery, the assistance is cut and the remaining energy is reserved for the lights. The iWeech bike will automatically go to sleep after 2 mins of inactivity. If the battery is charged, the iWeech enters storage mode (deep sleep) after three days of inactivity. This storage mode can be activated manually by pressing the button for 5 s. Note that the Raspberry Pi is powered by a second internal battery which makes it possible to locate the bike even when the main battery is removed or discharged. Internal battery life is approximately five weeks.

The battery and its charger.

The iWeech is a very good electric bike that leaves technology behind in favor of the pleasure of riding. Never intrusive, its embedded technologies are discreet, but quickly become essential, as is the case with electronic anti-theft with SMS alerts and GPS/4G tracking. The power of the Brose engine associated with the belt transmission results in a powerful cocktail while limiting maintenance. To complete the picture, we would have liked a little more comfort and extension, but as it is, the iWeech is already a very good bike for daily trips.

add a comment of iWeech test: an urban, smart and practical electric bike