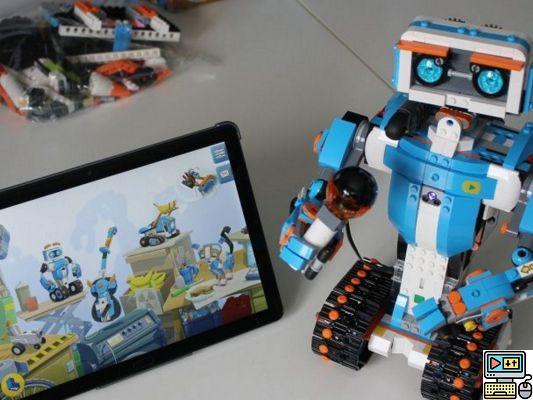 Lego pieces, a central control box with 2 motors, sensors and an app: this is what the famous Danish manufacturer offers to introduce our little ones to robotics. A playful discovery combining construction and programming.

More accessible than the Lego Mindstorms released before them (from 10 years old and based on Technic bricks), the Lego Boost are intended for children from 7 to 12 years old (System bricks). The slogan "Build, Code, Play" defines the educational and fun nature of this kit. It is indeed a question of first of all making your hands work before really using your neurons for one sole purpose: to have fun. And the objective seems to us rather achieved.

The "My first Lego Boost constructions" kit (Lego reference 17101) is sold at the recommended retail price of €159,99. It is compatible with other Lego products in the Ninjago (70652) and Lego City (60194) ranges, to extend the Boost experience beyond the main five robots.

With its 847 pieces, the Lego Boost kit immediately reassures about the variety of mechanisms that can be designed. A good part is also used to assemble each robot in the kit, but there are still a certain number of them once our construction is finished, contrary to what we observed with Xiaomi's Mi Robot Builder, which uses almost all its 978 parts for the assembly of the biggest robot.


The 12 bags of the "My first Lego Boost constructions" kit.

But before embarking on the construction, it is indeed a touch pad that we will have to find (with Bluetooth 4.1 or higher, 1 GB of RAM and a dual-core chip at 1,4 GHz at least), since all the assembly instructions are presented via the Lego Boost application (402 MB), compatible Android (5.3 or higher), iOS (10.3 or higher), Windows 10 and Amazon Fire OS. You can still download them (Vernie the Robot, Frankie the Cat, Guitare4000, MTR 4, AutoConstructeur) if you prefer to read a PDF document (large: up to 182 MB all the same for that of the AutoConstructeur) , but the optimal experience does indeed go through the tablet, which is essential for animating the robot and programming it.

The home menu of the Lego Boost app.

The interface turns out to be particularly graphic and everything is explained by images, which turns out to be much more attractive for children who are not always very inclined to read manuals (especially at 7 years old, or even less, age of learning reading). As soon as the application is launched, you are then guided step by step to first build a small basic vehicle that allows you to understand the concept of Lego Boost in just a few minutes.

The first vehicle, basic, allows you to understand the basics of Lego Boost gently. On the right, the Lego Move Hub.


We then use bag number 1, containing a few parts and above all the Lego Move Hub, the central unit allowing the connection to the tablet and integrating two motors as well as the 6 AAA batteries necessary to power the assembly (Hub, external motor and module with sensors). We can regret the choice of batteries instead of a rechargeable battery which would undoubtedly have offered better autonomy, since the robot is quite energy intensive. Fortunately, nothing prevents the use of NiMh batteries that can be easily recharged. Once this first step is complete, we then get to the heart of the matter: making your first robot, chosen from the five available.

From Vernie to Frankie

For this test, we set our sights on the main model, Vernie the Robot. We then follow the instructions with bag number 2, then 3, 4 and 5. 35 to 40 minutes later, we already obtain a functional body.


It's time to wake up Vernie! The app asks us to press the little green button on the Hub and... like us, you may need to activate Bluetooth and allow the Lego Boost app to access the microphone and speakers ! A formality fortunately, the connection is then done automatically, without the need to tamper with the settings of the tablet. And so Vernie comes to life to greet us and immediately remind us that we still have work to do; the poor man does not yet have arms or caterpillars to move about. Small disappointment all the same at this level, we realize that the sounds of the robot are emitted by the tablet, in the absence of speaker in the kit. Too bad, it breaks the immersion a bit.

Press the green button and the robot turns on.


The final construction stages follow, adding 45 minutes to a maximum of one hour of assembly. By taking our time, we took a total of about 1h30 to assemble Vernie. Once the robot is operational, we can then continue to discover its capabilities by carrying out several activities where we are explained step by step how to "program". We then move on to the robotic aspect of Lego Boost.

Vernie the Robot, ready for action.

The fifteen activities offered with Vernie (60 in total if we add those of the other robots in the kit) range from triggering his cannon with a clap of the hands to Bourricote-type mini-games, including singing and dancing. The functions are basic, but fun, especially for young children. These activities are in fact tutorials and are essential to access all the functions of the robot in the toy box mode. This then allows us to give free rein to our imagination to program more or less advanced sequences from the bricks that we have unlocked.

The programming interface by bricks.

Brick-and-mortar programming or nothing

The programming itself is pretty basic. Everything is done with bricks to align one after the other. We can thus create sequences of actions linked in chronological order (from left to right, depending on how they are positioned on the screen) with all the same conditions, loops and small functions. It is obviously limited, but simple and easy to make children understand. Too bad, however, that the Lego Boost cannot be used afterwards with the Lego Mindstorms, the system being completely closed. No question either of using another programming language, only the Lego Boost application allows you to program the robots.

A nice variety to not get bored

If the possibilities are necessarily limited by this closed environment, let's not sulk our pleasure, since the Lego Boost kit is still a fairly complete set. The interactive engine as well as the module combining proximity sensors and colorimetric sensor already make it possible to design a good number of scenarios with the robots, especially since these are varied enough not to have the impression of doing the same thing again under a different shape.

The activities are varied.


The Frankie cat, for example, is associated with activities specific to our domestic cats (meowing, purring, eating, etc.), while the MTR 4 robot gets closer to the construction machine and can lift objects. Finally, the factory that assembles Legos together and the guitar that obviously plays music have little to do with the other constructions and thus avoid the boredom that could arise with robots that are too similar each other. If we add the other optional kits that can work with Lego Boost and the often overflowing imagination of children, there is therefore enough to spend a good number of hours playing with this system.

Ideal for gently discovering robotics, this Lego Boost kit is well suited to the youngest who can easily program many functions and then give free rein to their imagination. We appreciate that Lego also thinks of associating its system with other collections of its brand. On the other hand, the ecosystem remains closed and the possibilities all the more limited if one wishes to migrate to more advanced robotics. It will then be time to switch to Lego Mindstorms or robotics kits from other brands.

add a comment of Lego Boost test: playful robotics for the youngest