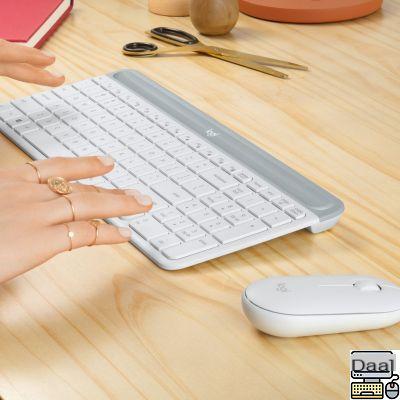 Finding an efficient and inexpensive input device is a challenge as the offer is as vast as it is varied. Logitech offers to kill two birds with one stone with this MK470 combo which includes keyboard + mouse. But is it a good deal?

When you see the shelves filling up with illuminated gaming keyboards everywhere, you can get the impression that these design choices have become the norm… when not at all. Logitech, for example, still has a wide range of keyboards dedicated to office work and focused on the principles of simplicity and efficiency. The MK470 model that concerns us here is also a worthy representative of this traditional movement, with its all-purpose gray dress and its very compact format. Its price is also very attractive, around €49, knowing that it is not marketed alone. Logitech has indeed chosen to accompany it with a second PC peripheral, an M350 mouse, which we will briefly discuss at the end of the test (see box).

Despite a compact format, the keyboard incorporates a complete layout, numeric keypad included.

That being said, experience has often shown us that the line between simplicity and lack of functionality can be fine. Let's see if this Logitech keyboard has managed to find the right balance that we are calling for.

Unboxing the MK470 is a bit of a surprise, as the product is surprisingly heavy. To give you an idea, the K400 model from the same manufacturer, which responds to a fairly similar format and which we are used to using, only displays 380 g on the scale (batteries included). The MK470 weighs 560 g: the reason for this weight gain is due to the fairly significant ballasting of the rear part of the device, and it is this characteristic, reinforced by the presence of 5 non-slip pads at the base of the chassis, which must make it possible to ensure perfect stability of the keyboard. A winning combo, one might say, since the MK470 knows how to stay in its place despite its small size, whatever the demands.


Unable to change the tilt of the keyboard. But given the low thickness of the set, this does not influence typing comfort.


In addition to providing some stability, the rear part of the keyboard has a removable cover that runs along its entire length. Its removal reveals three slots: two are intended to receive the two AAA batteries necessary for the operation of the device (which is wireless, remember). The third, smaller, accommodates the PC link dongle when the latter is not in use.

Two AAA batteries will be enough to power the keyboard for 36 months, according to Logitech.


Overall, we can consider that Logitech has taken good care of its product: the structure of the MK470 is very rigid, much more so than the K400 to use this comparison. As for the famous cache, it has a slightly concave area. Ideal for putting down a pencil or a pen, some would say, but, as far as we are concerned, we mainly used it as a support area to facilitate access to the internal housings. The part of the chassis that wraps the keys as well as the keys themselves benefit from a very slightly grainy finish, which is rather pleasant. However, certain elements clearly mark the entry-level positioning of the MK470.


Removing and attaching the cover produces plastic noises which constantly remind the user of the predominance of this material. Still on the cover, there is a shiny treatment whose aesthetics is questionable, as it retains fingerprints, and which above all gives the impression of having forgotten to remove a protective film.

In another register, even if the assemblies are for the most part without fundamental defect, there are some very slight burrs here and there. Finally, point of laser engraving or concave shape for the keys (as on the MX Keys): the visible characters are the result of a basic screen printing, on a flat background. Logically, the user will not benefit from a backlight option either. Just as it's a shame that Logitech didn't slip in a small carrying case. Given its size (373 x 144 x 21 mm), the MK470 slips easily into any backpack.

On the side of software interactions, again, the MK470 will be limited to the bare minimum. No particular support or customization of the functions of each key is offered. The advantage all the same is that it is enough to connect the dongle to a USB port so that everything works. Dongle which is reported to manage the two peripherals delivered, keyboard and mouse. We would also have appreciated that a software system informs us about the autonomy, even approximate, of the product. That said, Logitech claims that the two batteries are enough to provide 36 months of use, knowing that a standby system is activated in case of non-use. See you in three years to see if the promise is kept.

If you had to retain a first impression at this stage, keep in mind that the MK470 seems to offer services in accordance with its price positioning. But for this opinion to hold, it is obviously necessary that typing comfort is there.

The Logitech MK470 keyboard uses a so-called "chiclet" key technology that is commonly found on laptops. It has two advantages in this case: it makes it possible to gain in comfort by offering very fine keys, easily accessible without the support of a wrist rest, and it is notoriously more discreet than mechanical technology. These two elements are verified quite quickly. Without any particular adaptation effort, the MK470 offers a clean, efficient strike over a short stroke, but at the same time not too dry. The rubber domes ensure a well-dosed damping and rebound effect.

The MK470 has shared functionalities on its upper line: default mail client or volume adjustment are thus accessible by the Fn key.


In terms of noise pollution, nothing to complain about either. While our typing is usually rather heavy and resonant, our colleagues have barely heard us tapping for a few days. The return to our mechanical keyboard in MX Red (the real ones know) is sure to cause some disappointment.

While the MX Keys keyboard aimed for excellence in office use, the MK470 model rather intends to offer an efficient experience at a modest cost. A goal that we believe has been fully achieved. Admittedly, the MK470 does little, but it does well. We especially note the absence of backlighting on the keys and the mouse, which we find less qualitative. The rest of the sacrifices observed seem to us to be in line with the targeted budget.

add a comment of Logitech MK470 Combo Slim Keyboard Review: Better to be alone than in bad company