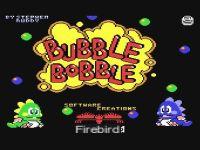 No multiplayer in this game which is a remake of the hugely popular Bubble Bobble, one of the most famous games in the world between the 80s and 90s. Bubble Bobble was a game by Taito, a well-known Japanese videogames brand famous for Space Invaders, Qix, Bubble Bobble and then the sequel Rainbow Island and above all Puzzle Bubble to which still plays today.

Bubble Bobble is that game where two dragons shoot bubbles from their mouths and try to kill enemies by trapping them in green bubbles. Each level consists of a single screen made up of platforms on which to jump to escape from enemy monsters (if they touch you you are dead) and to shoot bubbles at them. The enemy does not die immediately, they are trapped in the bubble that must be burst.

Bubble Bobble can be played online, in its original version from the hall (including the unforgettable music) on the mythical site-emulator Retrogames, even in two players. You start by putting the money with the Shift key and then play.

You can play it on your pc using theMAME emulator, the one that allows you to play the old coin-op videogames, the ones that were played in the arcade.
In another article the guide for play old arcade games with the MAME emulator. 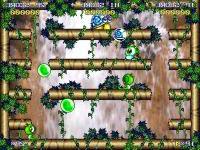 A version of Bubble Bobble that you can download and play for free on your Windows pc è Bubble Hero 2, a game very similar to the original, renewed in the graphics that you canò play alone or in two on the same computer, with joystick or joypad. The goal is to pass each proposed level by killing the creatures that fly and jump in the picture. The drakes shoot bubbles and when one of the monsters is within cannon range, it will be encased in the bubble and will begin to float upwards. After trapping a monster, you have to go to the bubble to make it burst.
In each level there are tons of bonuses to collect to score points and to take special weapons and pass the levels more easily. There is also a time within which you have to complete the level otherwise the enemies get faster and more evil. The dinosaur can walk, jump and shoot bubbles but the fun begins when you play Bubble Bobble with a friend sitting next to the computer. Bubble Bobble is perhaps one of the most beautiful and fun games to play for two in the history of viedeogames. The game is dated 1999; graphics, animations and sounds are fine with the exception of the background which looks a bit distorted. Sometimes you encounter boss creatures who can be defeated in different ways to understand from time to time. Bubble Hero 2 is a nice remake of a classic and one of the most popular games of all time that ran well on Windows 7 32-bit and 64-bit (if it goes haywire, launch it from the program folder)
For adults and children, Bubble Bobble is definitely one of the longest-running pastime games, easy for experts, terribly complicated for novices.
It is not to be forgotten that Bubble Booble also had one of the most beautiful video game soundtracks ever which can be listened to on YouTube.

Other old games can be found on the sites that collect "Abandonware" videogames, with old DOS games to download for free.
In another article there are the best games shoot bubbles or shoot balls similar to Puzzle Bubble.