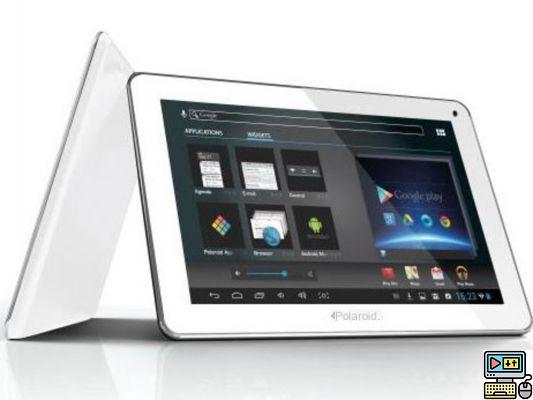 No longer necessarily a luxury accessory, the touch pad has almost become a commodity as the prices keep dropping. The class of devices under 100 € has sometimes been able to surprise thanks to products of rare quality. The 7-inch Polaroid Infinite is not one of them...

Long the standard-bearer of instant cameras, the Polaroid brand has expanded into the mobile accessories market in recent years with the help of white-label and later own-label products. The 7-inch Infinite tablet is part of this diversification effort and the device comes to hunt in the field of ultra-low-cost with its floor price of 50 €.

In the bowels of the device, there is an AllWinner A23 dual-core processor clocked at 1,54 GHz, aided by 512 MB of RAM and a Mali-400 MP graphics chip. The 7-inch (17,8 cm diagonal) TN panel touch screen displays a glorious definition of 800 x 480 px; the single front-facing VGA webcam captures 0,3 million pixel snapshots; the internal memory ranges from 4 to 8 GB depending on the model (expandable via microSD up to an additional 32 GB). You have to rely on Android 4.4 KitKat to run everything and autonomy is ensured by a 2400 mAh battery.

If it is obvious that at this price you should not expect a device made of "noble" materials, we could still have hoped to find a better quality plastic. The shell of the tablet is of rather coarse quality, the assembly leaves a gap in both the screen and the battery and is conducive to creaking. Also, the back of the tablet is easily scratched and attracts stains.

Where most 7-inch devices opt for physical buttons on the side of the device, so that they fall naturally under the fingers - this format is mainly used in portrait mode, vertically -, the tablet of Polaroid makes the strange choice to place all the controls on the upper edge, including the volume control, thus forcing some finger gymnastics or two-handed use. Buttons which, moreover, do not really breathe quality and click with a rather dry and very plastic noise.


The certain overweight of the tablet (a little over a centimeter thick) at least gives it the advantage of fitting the hand well thanks to its curved back. At least that's it.

The Polaroid Infinite 7 panel has almost all the faults that a screen can accumulate. First of all, the definition of 800 x 480 px displays a very low density of 120 pixels per inch and the space occupied by the display is only 63% of the front face. The maximum luminosity reaches a starving maximum of 170 cd/m², the restitution of the colors is completely distorted, since the delta E reaches 12 and the color temperature even explodes the limits of our probe and becomes at the limit of the calculable (more than 55K). The contrast does not save the day, with a low average ratio of 000:411.

In terms of tactile delay and afterglow time, the screen of the Infinite 7 gives birth to 127 ms and 33 ms respectively, which is not very good results, but not catastrophic. If the figures are staggering, in use this is not what bothers the most. The two problems that most afflict this tablet are above all the construction of the device and the technology of the screen. First, the plastic slab that covers everything is very far from the screen, which handicaps responsiveness and promotes reflections; the use of a TN panel has the effect of drastically reducing the viewing angles, making the tablet sometimes difficult to use as it has to be tilted to see something during navigation. All this therefore combines to make room for an experience that is painful to say the least.

In the great unfortunate tradition of low-cost devices, the Polaroid Infinite comes pre-loaded with an outdated version of Android (4.4) with little hope of an update. Fortunately, the manufacturer had the good taste to make virtually no changes to the "stock" interface of Android, which ensures good general fluidity when browsing.

In reality, the only significant change made is at the level of the navigation bar. Where we usually find the Back, Home and Multitasking buttons, the manufacturer has seen fit to add two controls to manage the sound as well as a shortcut dedicated solely to screenshot. All of them are not only redundant with the physical buttons and cannot be removed, but also overload the navigation bar.

If we did not notice any fundamentally annoying slowdowns, it is rather the meager screen definition, the resulting poor information density and the very reduced viewing angles of the TN panel that make all navigation activities (Web, app, photo...) painful. At least the empty space between the shell and the circuit allows the heat to be dissipated effectively since the tablet does not heat up in any way.

Video playback goes directly through Google's Gallery app, which is relatively limited in functionality. However, the tablet has no trouble decoding HD or Full HD videos, but due to its low screen definition, it is far from doing them justice.

Point of salvation on the side of the headphone output. Only compatible with 3,5 mm 3-point jacks, the output delivers power below average and is not even saved by its nasal sound. As for the loudspeaker, it is also severely lacking in power and reproduces a muffled sound concentrated on the midrange.

As for video games, the slate does not really work wonders. Where the majority of tablets manage to launch most games from the Play Store at the cost of a loss of graphics, the Polaroid simply and constantly crashes during the launch cinematic of Real Racing 3, for example. Once a less demanding game has been launched, the slate still has trouble following both in terms of graphics and general fluidity since there are perpetual micro-jerks which make the game somewhat complex.

The single 0,3 Mpx sensor on the front panel announces the color very quickly: it will be dull. The rendering does not actually shine with its deep colors or its vibrant details, but is sufficient to ensure videoconferencing as long as the light is mild. In use, count all the same almost 2 s between the action and the actual triggering of a photo.

The Polaroid tablet does not last the day, no matter what. Difficult to digest such a defect when today we expect a tablet to last at least 2 days in sustained use. Unfortunately, the battery literally melts visibly since a short surf session (just over 30 minutes) sees the battery percentage drop by a good fifteen points. Autonomy quickly collapses below the 50% threshold.

Strangely, it takes about 4 hours to fully charge the meager 2 mAh battery. If the first half of the gauge recharges rather quickly (about as fast as it depletes), you have to be patient to reach 400%.

The 7-inch Polaroid Infinite suffers from a poor quality screen that taints the entire user experience. In addition, the tablet does not really shine by its construction or by its multimedia qualities. Faced with an opponent such as the Cdisplay, the Polaroid does not hold up, even with its floor price.