Radeon RX 6600 review: AMD signs an ideal card to extend the life of your PC

AMD continues to decline its RDNA 2 architecture on a fairly well-mastered field: that of entry-level graphics cards. Here is our review of the Radeon RX 6600. 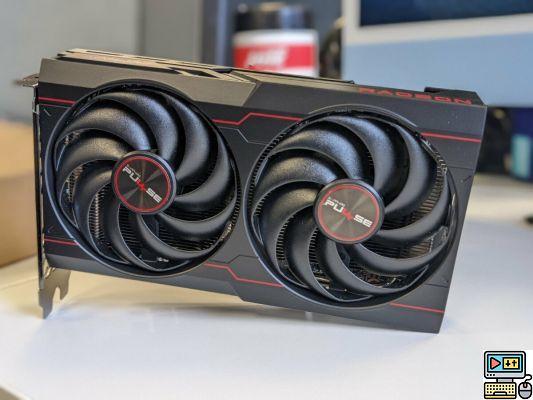 Yes, the graphics card market is still facing, like the rest of tech, a great shortage. This does not prevent AMD and Nvidia from following their roadmaps. In this case, it is necessary to gradually replace the old catalog with the new RDNA 2 range from AMD. Without being perfect, the new architecture has already shown that it is a marvel, especially for “classic” 3D computing, without ray tracing.

The advantage is that on paper, the graphics card should consume less. This is also reflected in the cooling circuit chosen by Sapphire for the model we are testing today. The Sapphire Radeon RX 6600 Pulse offers a very small footprint, with a dual slot design with two fans and an 8-pin PCIe connector for the power supply. AMD also highlights the possibility of using its graphics card with a simple 450W power supply.

AMD's promise with this card is to offer sufficient performance for a Full HD display, and to be competitive with Nvidia's GeForce RTX 3060. 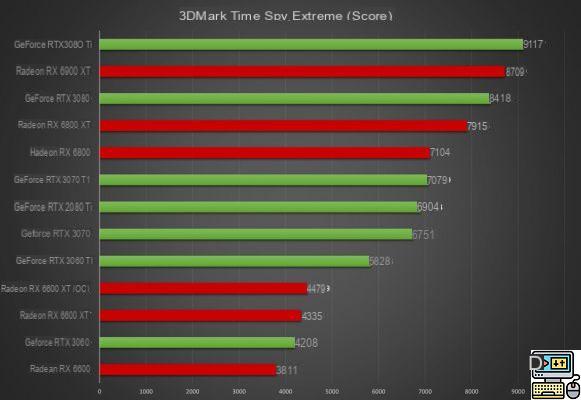 Our Radeon RX 6600 obtains a score of 3811 points which is quite honorable, but below the GeForce RTX 3060. AMD however has the advantage on this test usually with its RDNA 2 cards. It will be necessary on the other tests if this trend is confirmed.

We now know that the RDNA 2 architecture does not like ray tracing very much. This is the first generation of graphics chips from AMD to offer real-time ray tracing, and on this front, the brand does not obtain results at the level of the competition. 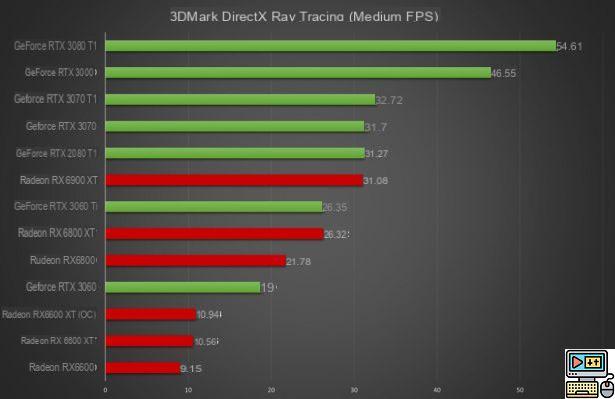 To have comparable results between all our tests, we benchmark Red Dead Redemption 2 in 4K with the graphics options at maximum. Obviously, the Radeon RX 6600 is not cut out for this kind of request, it is not its role. We then tested the game with a Full HD definition more in line with the promises of this card. 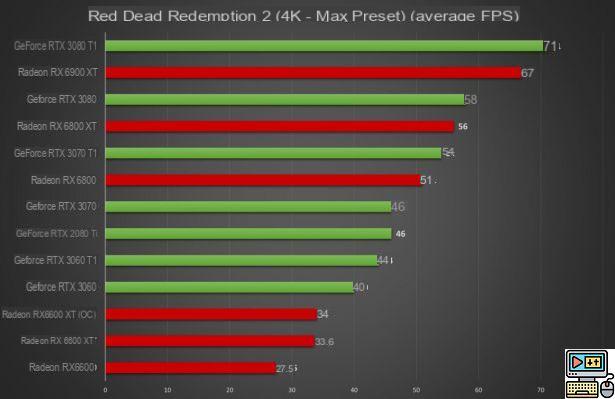 Our comparison shows that the Radeon RX 6600 once again finished at the bottom of the ranking. However, the most interesting thing is in the result obtained: 27,5 frames per second for an entry-level graphics card, in 4K on a very greedy game, it's really not bad. By switching to Full HD, the game then runs at 62 frames per second on average, always with the best graphics settings. *

In other words, Red Dead Redemption 2 is perfectly playable in Full HD with the Radeon RX 6600.

Same observation on Assassin's Creed Odyssey that we tested in 4K with the benchmark integrated into the game. 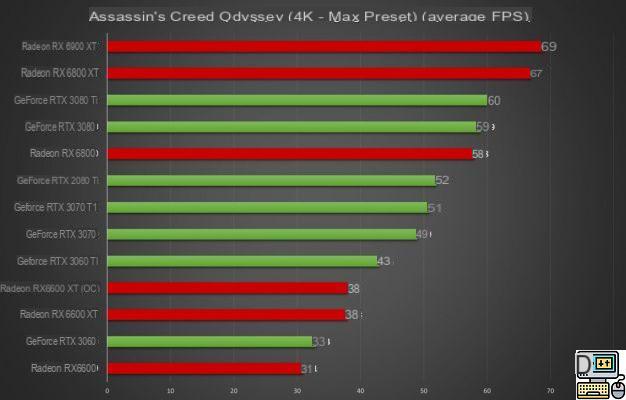 The Radeon RX 6600 clocks in at an average of 31 frames per second, making it far more capable than previous generation consoles. We have a native 4K rendering, with a much better graphic quality, at this famous level of 30 frames per second.

As during our test of the Radeon RX 6600 XT, it was impossible to run Watch Dogs Legion under the conditions necessary for our comparison. The benchmark then runs at 2 or 3 frames per second, which is obviously unusable. On the other hand, we were able to run the game at 26 frames per second in Full HD by activating ray tracing, and with high graphics settings.

Still, 26 frames per second on average is too low to be enjoyable in an action game. In the busiest scenes, the fluidity may break down. You will therefore have to compromise on the graphics options to run this game.

The big release of the moment comes from Ubisoft with the launch of Far Cry 6. This title manages both ray tracing and AMD FSR technology to compete with Nvidia's DLSS, with much simpler operation. 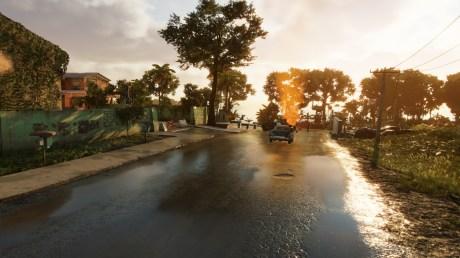 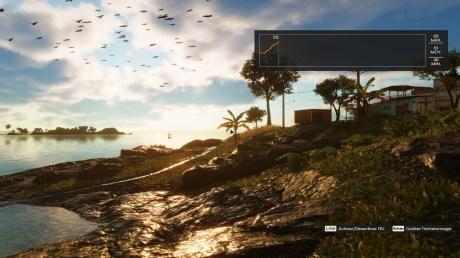 We were able to run the game in 4K display with maximum graphics settings and ray tracing activated at 63 frames per second on average thanks to the FSR set to efficient. This means that the internal rendering resolution was actually just 1920 x 1080 pixels, which was then upscaled to 4K by the FSR algorithm. As you can see on the images, the result is a bit uneven, and it's even more striking on video.

Overall we have an image that may appear to be of good quality, especially for improved 1080p, but in fact, on certain details we can perceive the limits of the FSR. This can be seen for example on the contours of the vehicle, which are very distinct from the road, or on the display distance of foliage on the image of the edge of the beach.

By setting the FSR to "Quality", the fluidity drops to 53 frames per second, but the image quality is better. The calculation definition is then 2560 x 1440 pixels. Once again, the Radeon RX 6600 shows that it is perfectly capable of handling Full HD games, and with FSR it can even accommodate a higher definition display.

We noted the consumption of the Radeon RX 6600 during our various test sessions with the HWInfo software. 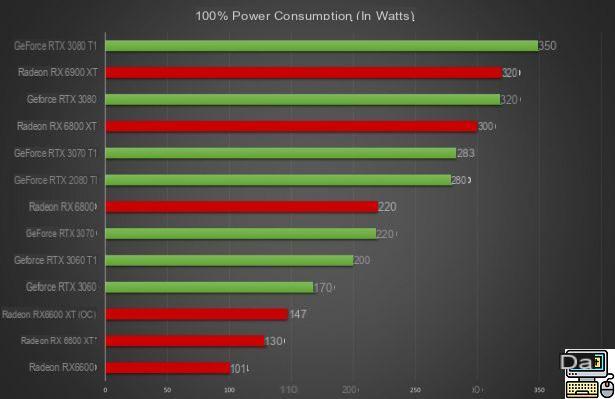 In all of our tests, we noted a maximum indicated consumption of 101 W for the Radeon RX 6600. This is very light, as is the noise generated by the graphics card, which was imperceptible in an open space. It really is a small product that knows how to be discreet and should not increase the electricity bill.

The Radeon RX 6600 is launched on October 13, 2021 at the recommended price of 339 euros. For the launch of the Radeon RX 6600 XT, we were surprised by the stocks and the prices more or less respected by merchants. Hopefully that will be the case again here. On the subject, AMD tells us that stocks should be substantial in Spain.

Audio Video Radeon RX 6600 review: AMD signs an ideal card to extend the life of your PC
Dell Inspiron 15 3511 review: a laptop capable of the best and the worst ❯

add a comment of Radeon RX 6600 review: AMD signs an ideal card to extend the life of your PC