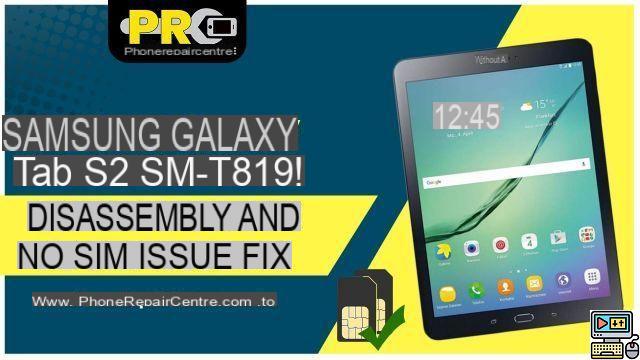 Samsung's new high-end tablet makes its debut. After a Galaxy Tab S which had established itself as one of the great successes of the year 2014 on the slate, the Tab S2 emerges out of the night with a different format and a brand new design, for a kind of move upmarket Galaxy Tab A's.

After deciding to compete with Apple head-on on smartphones with the GS6 and versions against the iPhone 6, both technically and commercially, Samsung is embarking on a similar battle against the iPad and iPad Mini with Galaxy Tabs. S2 9.7 and 7.9 in similar formats. A fight already started with the release of the Galaxy Tab A, also in these formats, but without the high-end side.


The user interface is provided by Android 5.0.2 Lollipop, completely covered with the own TouchWiz system so dear to the Korean brand.

If the first Galaxy Tab S 10.5 was meant to be an XXL version of the flagship Galaxy S5 smartphone, this Galaxy Tab S2 borrows nothing from the Galaxy S6. Samsung's new slate will instead draw on the intermediate design that appeared since the Galaxy Alpha, then more visibly on the Galaxy Note 4 and finally democratized on Galaxy A mobiles. The Galaxy Tab S2 is therefore the big sister, in size, of these devices. and is however displayed as the thinnest tablet in the world, on its thinnest part (the photo sensor protrudes by a hair), with 5,6 mm thick.

If the metal could sometimes be the majority in the construction of the latter, the Tab S2 remains measured on this point and adopts only for its periphery, by adding a small chrome border. The product is light and relatively compact for its format and therefore knows how to be discreet in a bag and practical in the hand. We are still waiting, however, for a brand to go to Apple land with a neutral touch point on the screen in order to grab the product with one hand, with a thumb on the screen, without canceling the tactile interaction of the other fingers.

The fingerprint reader offers the same operation as a Galaxy S6 or a Note 4, by placing the finger rather than sliding it, as offered (unfortunately) by the Tab S and the GS5. The result is more ergonomic, precise and rapid use.

As with other identically equipped Samsung devices or iPads before that, this reader quickly becomes essential for quickly unlocking the screen.

On the side of the flats, because there are some, let's start with the most anecdotal or almost, namely the finish of the perimeter. The ridges are chiseled and can potentially bother the user a bit on the palms. However, this is largely diminished by the featherweight of the beast. Another remark, the assembly on the back is not 100% uniform. Without apparently reaching the integrity of the product, we would have liked a little more care given to the finish on a high-end positioned product. Note the two small circles on the back, chrome and which, as on the Tab S, sink and simply allow to accommodate the system of fixing official Samsung cases for its slate.

The 9,7-inch Super Amoled panel of this Tab S2 sees its definition "drop" to 2048 x 1536 px (compared to 2560 x 1600 on the Tab S), which allows it to still maintain a resolution of 264 dpi, sufficient for a clear display of texts in particular. The maximum brightness reaches 376 cd / m², which is very correct for this technology which benefits from an almost infinite contrast to compensate. The result is impeccable outdoor readability. We measured a reflection rate of 8%, which places the Tab S2 among the good students in the category.

In terms of colorimetry, the Tab S2 does more than defend itself. On the "basic" screen mode, which is the most faithful on the vast majority of Samsung terminals equipped with several display modes, we measured a delta E of 2,2, indicating accurate colors. The color temperature is stable and close to standard at 6640K.

This display is not without reproach, however, since we measured a tactile delay of 99 ms, above the average of our comparison and for once very far from the 9 ms noted on the iPad Air 2, master in the matter. In essence, the Super Amoled panel of the Galaxy Tab S2 still rises to the same highest step as that of Apple's slate. Two tablets that now offer the best display on the market.

No software upheaval on this Tab S2, Samsung regulars in the middle / high end of the last 12 months will absolutely not be lost. The TouchWiz interface that covers Android 5.0.2 is now lighter, offers a basic application menu at startup and dedicated or partner apps, such as Smart Manager for a quick glance and management of storage or battery, Side sync to transfer the Tab S2 poster to another compatible screen, the Galaxy Apps store with dedicated offers on Android apps, the Microsoft suite, l'Équipe, Le Monde, LeKiosk and of course the swarm of apps Google apps.

We note the disappearance of the application bar allowing you to launch two apps at the same time on the screen. You have to go through multitasking and the small "multi" icon to separate the screen, provided that the application in question is compatible with this option.

In terms of performance, the Tab S2 has a mobile chip that is largely able to run it without a hitch, whatever the uses. The Exynos 5433, which already equips the excellent Galaxy Note 4, plays a very good score and it is possible to do multitasking with a few applications open in the background and even, for the joys of the test, a Full HD video in windowed mode without the tablet flinching at a single moment.

Video playback retains the same qualities and shortcomings as most high-end Samsung mobile products: largely extended file compatibility, an application full of playback and display options, a window mode to watch a video while doing other thing... and still an incompatibility with AC3 and DTS. Pity...

The Galaxy Tab S2's headphone output is generally good. It delivers sufficient power for all headphones, even the most demanding ones and a sound devoid of distortion. Also, the dynamic range is above average. Only the restitution of the stereo image is satisfied with a value in the average.

The two loudspeakers located on the lower edge of the device offer stereo rendering. Unfortunately, this positioning is not very ergonomic. When holding the tablet in landscape, the lowest outlet is obstructed by the hand. If their power is correct, the sound quality is not really there. No bass and noticeable distortion in the upper mids make listening to music and watching movies complicated.

On the video game side, one of the very small weaknesses of the Galaxy Note 4 and the Exynos 5433 is expressed in a slightly more visible way here: its GPU. If it allows the tablet to display most of the magnificent graphic effects of the usual video game behemoths of the Google Play Store, it also offers a lot of aliasing (staircase effects). What slightly start, but without calling into question, the real pleasure that this tablet provides in game. The fluidity is there, on all games, at all graphic levels.

The sensor remains at 8 Mpx, as on the first iteration of the Tab S, but the results are less convincing. The level of detail is correct in the center, but the smoothing is more present on the edges. Above all, the colors are much duller and the shots clearly lack warmth compared to the first Tab S and an iPad Air 2. Focusing and triggering are rather fast, but it is not uncommon to still get blurry images. Stabilization would have been welcome. In low light, the performance could have been good, if the contrast had been a little higher and – again – the colors less dull. The electronic noise remains contained, but we are still far from being able to use these photos. Also note that between the Tab S and the Tab S2, the LED flash got lost on the way.

Those who would be tempted to make videos with this Tab S2 can do so up to Full HD. Continuous focusing as well as exposure metering are done through smooth, well-managed transitions. The final rendering, on the other hand, suffers from the same criticisms as for the photo.

The 2,1 Mpx front sensor does not particularly excel. The level of detail does not reach the heights, which the tablet seems to try to counter with an accentuation of the contrast that is not necessarily very happy. The smoothing applied to the image — excluding "beauty" mode — makes it possible to limit the breakage in terms of noise. We will be satisfied with it for videoconferencing, but selfie lovers will not be at the party. In this register, we prefer the Sony Xperia Z Tablet or the iPad Air 2.

By choosing extreme finesse, Samsung has condemned itself to reducing the battery capacity of the Tab S and the Tab S25 by 2%. This could result in a collapse in autonomy, but Samsung manages to compensate, in particular thanks to a lighter Android / TouchWiz combo. However, there is a strange phenomenon: the Tab S2 is one of the best tablets on the market for continuous video streaming (Netflix), with more than 12h30 of operation, even if it is still 1h30 less than the Tab S. on the other hand, the slate is less enduring in mixed use, with 9:16 am achieved on our new test protocol, when Sony offers 4 additional hours of autonomy and a Galaxy Tab A, almost more than double!

The Tab S2 remains solid in autonomy, especially its day before, but we can find much better today, for sure. Recharging is not particularly fast and a complete cycle always requires a little more than 3 hours of time.

If the Galaxy Tab S2 is an excellent tablet, it does not repeat the success achieved by its eldest a year earlier, which has also switched to Android Lollipop this year. Less enduring than the Galaxy Tab S 10.5, it nevertheless remains powerful, equipped with a magnificent screen, correct finishes but not really very high-end nor practical by its format for web consultation. This is ultimately what could most interest a potential buyer of this all the same good product: its 4:3 format, useful for many uses.