“Such is taken who thought he was taking! » : the happiness of downloading an application illegally

Downloading a paid application, by pirate networks is prohibited. But when this application turns into malware, the user becomes disillusioned.

The Android Market is the store that contains the most free applications. However, many users do not want to pay and the situation can backfire. Walk And Text is a keyboard for Android. His motto is "watch what passes in front of the road, while walking and typing". Google has highlighted this application, so there is no particular problem to report.

Only paying $1,53 (around €1,09) is not to everyone's taste. This is how we can find on pirate networks, this keyboard for free. It's a scourge on Android, mostly for indie developers who see a big chunk of cash flowing here. Google had introduced a licensing system to protect applications. For now, it's a flop.

We might be alarmed by this situation. But the situation can sometimes become comical. Indeed, a hacker had fun distributing an application with malware (Android.Walkinwat), instead of this keyboard. It is easily found on American and Asian networks. This worm therefore has an educational dimension, even if it recovers your personal data.

When launching the application, you will see a nice “Cracking” message appear in the middle of the screen. At this point, the malware takes care of collecting and sending your personal data (IMEI, phone, etc.) and sends everything to the hacker. Then, the most fun comes from the fact that an sms is sent to the entire address book:

Therefore, if you do not have an unlimited plan, or you have correspondents abroad, your plan will explode. We can notice the mistakes in English, which are certainly intentional. Finally, the application makes fun of the user by inviting him to look at his bill, but above all to go and buy the application on the Android Market: 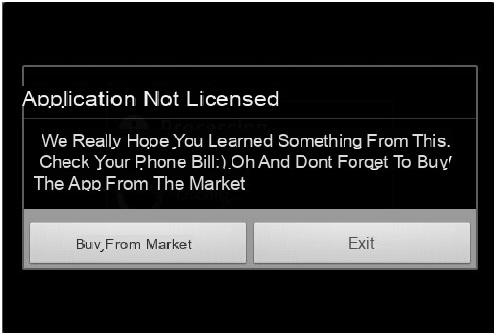 Yesterday, many of you were offended by the price of SPB Shell 3D. Some even gave links to the apk, finding this "normal". Likewise, it seemed logical to you to distribute the Angry Birds Rio apk, even before its availability on the Android Market. You should know that the shared version is normally paid (although currently on promotion). This kind of operation can be assimilated to counterfeiting.

The expression "Such is taken who is taken who thought he was taking!" is adapted here. I hope this information will make you think before thinking about illegal downloading.

Audio Video “Such is taken who thought he was taking! » : the happiness of downloading an application illegally
Download YouTube Video: The Easy Way ❯

add a comment of “Such is taken who thought he was taking! » : the happiness of downloading an application illegally