Use Google Cast on an Android TV 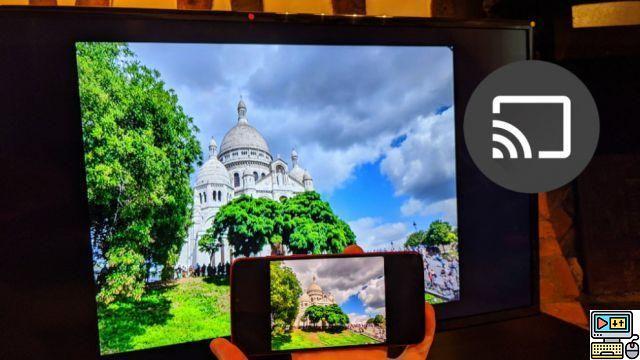 There are more and more Android TVs on the market. Among them, Sony and Philips have adopted the Google system for two years and TCL has just joined them. In addition to the applications, this system incorporates a little-known and yet very practical function, Google Cast, which allows content from a PC, smartphone or tablet to be displayed on the television. How to do ? Follow this guide ...

Connection to the local network and that's it!

The first step is to connect the TV to the Internet and to the local network. If you did not do it during the installation, go to the settings and choose the menu "Wireless and network" then "Wired / Wi-Fi". Then click on "Connect to the network". You can skip this step if you are using a wired Ethernet connection with a regular network cable.

In the settings, choose the "Wireless and network" menu.


In the "Wireless and networks" menu.

The connection wizard will open to guide you. Select Wi-Fi. Search for your wireless network with its usual name (SSID) and enter the corresponding password. There is nothing else to do on the TV. Once it is connected to the network, the Google Cast feature is automatically activated.

The Google Cast feature does not offer any options.

Cast from your smartphone or tablet

Go now on your smartphone or tablet. Google Cast-compatible apps automatically display a new icon if a compatible device is available. The best known is probably YouTube, which we took as an example, but there are many others (Netflix, Spotify, Deezer, OCS, SFR TV, Canal Play, Bein Sports, Dailymotion, Twitch, Ted, etc.) . Clicking on the Cast icon at the top right allows you to connect to the TV. It is then possible to continue using the smartphone while a video is playing on the TV. The YouTube app allows you to add videos to the playlist or start a video immediately. Remember that the television will search the video directly on the web independently. The video is played even if the smartphone or tablet is turned off.

The Google Cast button at the top right allows you to connect to the TV.


Cast from a computer

The Google Cast functionality also works from the Chrome browser. With the latest version of Google's browser, all you have to do is click on the settings icon (the three small dots) located in the upper right corner of the browser. The menu brings up the option "Caster". The latter allows you to send the content of a web page or the entire desktop. It is also possible to take control of the elements being read.

The Cast tab in settings allows you to display the screen image on the TV, just tab content or control what is already playing on the TV through Google Cast.


The Google Cast feature built into Android TVs works like the Chromecast. There is only one difference, the Chromecast allows guest mode which allows your friends to send content to the Chromecast without being connected to your home Wi-Fi network.

add a comment of Use Google Cast on an Android TV