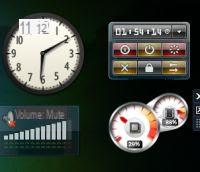 If you right-click on the desktop, in Windows 7 or Windows Vista, an item appears that was not present on Windows XP: Gadget.
The gadgets are graphic panels that show some chosen information on the screen and thus allow you to always have it under your eyes when you are at the computer.
In fact, these are small programs running on the PC desktop.
They were limited to the sidebar in Windows Vista, but this limitation was lifted in Windows 7 where these panes can be moved to any part of the desktop.
Windows 7 Gadgets have been heavily criticized, many people consider them annoying and useless because, at times, they are ugly to look at or because they are useless.
This is not exactly true, it always depends on where you are looking.

So let's see what they are the best gadgets for Windows 7 and for Vista, not aesthetically ugly but above all useful in a general sense, whatever the use you make of the computer.

Before describing the gadgets I have used and those that I always keep active on my desktop, I would like to reassure those who are worried about consuming too much RAM on their computer.
Gadgets, at least on Windows 7, can be seen in the task manager (task manager) by the "sidebar.exe" process which should not occupy more than 10 MB of memory.
Clearly this consumption of resources increases if you install and activate more gadgets so my advice is to use only those strictly necessary and, if anything, activate the others only when needed.

To install a gadget on Windows, if you download it from the Microsoft site, it installs automatically while if you download it in Rar format from other sites, you must unpack and install it by pressing on the .gadget file or copy the contents of the archive in the folder C: Users & username $ AppDataLocalMicrosoftWindows SidebarGadgets .
Gadgets in Windows 7 can be moved with the mouse and, by pressing them with the right button, can be configured with options available including there is always transparency or opacity and, sometimes, the size.

Generally, Windows gadgets are for six main things: to have hardware information, receive weather notifications and weather forecasts, clock, notification of new e-mails are arriving, a calendar, for an audio or video media player always in over impression,
Many of those proposed by the Microsoft site are absolutely bullshit that can have fun for a day but that end up in the trash immediately after.
Among those predefined in Windows 7 there are already the clock and weather detection with weather forecast.

As for the main function of the gadgets, the detection of hardware parameters, some of them that monitor the use of the computer are very convenient.

1) The most important among them is CPU monitor (should already be installed in Windows 7) which always shows the use of the processor and RAM.
You can change the graphics of this gauge by downloading the color pack from Deviant Art
This is important because so, when the PC freezes in long loads, you can immediately understand, without opening the task manager, that it is better to close something or wait for it to finish, without opening new windows or new programs.
Anyone with cpu problems, often 100% busy, can also install the Fileinspect gadget which shows the 5 processes on the desktop that use more processor and more RAM, in order to recognize them immediately.
In the options you can configure the view for the processes and the number of those to be displayed.

For computers dual core or with multiple processors, however, another type of gadget called All CPU Meter must be used which shows their usage.

2) To always keep an eye on it used space on the hard disk of your computer, you can download and install the Drives Meter gadget which shows the total, used and free space for up to 6 partitions or disks, both internal and external (including USB sticks).

3) Another important gadget is the one to check the use of internet bandwidth and see the data transmitted by the computer, upload and download.
Especially if you are using a timed internet connection, I recommend installing the Wired Network meter gadget which also shows the internal and external ip address.
Always regarding the network monitoring it can be useful, in case you use the Wireless network, the Wireless Network Meter gadget, same as the previous one in information with the addition of wifi signal control and connection security.

4) Battery Meter is perfect for laptops for check the battery charge status.

5) Notebook Info 2 is a great designed gadget for laptops and netbooks that displays a variety of information including: battery level and status, WiFi network status, CPU usage and RAM usage, power saving plans for quick selection, a clock, calendar, alarm clock and more.
In the options you can choose what to see and what not to remove what is not needed.

6) The volume control from Gadget is really useful because it allows you to to move the general level of the Windows audio volume, directly from the desktop, using the mouse wheel.
Pressing the central button on the gadget then you can set the mute.
See article on how to adjust the volume of the pc with the mouse wheel

7) The multimeter allows you to have everything in a box la forecast of the weather, time, consumption and use of cpu and ram and many other data on computer performance.

8) If you want a better watch than the default one, you can download the ClockTopia graphics package or a digital clock.
Searching on Google or on Deviant Art for the word Clock you can find many other fantasies.

9) On Deviant Art, the famous graphics site, you can download a package of gadgets among the most used in the world, Chameleon Glass which contains 15 gadgets to install.
Among these are: a watch, a tool for tempo forecast, a network detector and internet statistics, cpu control, checking for the arrival of new e-mails, disk check, empty trash and a radio to listen to in streaming.

10) Also from Deviant Art, there is another package of transparent Gadgets, including: clock, calendar, performance meter, Wifi signal, Feed Reader and weather.

11) A very useful gadget is System Shutdown which allows you to highlight the keys to shut down, restart or put the computer to standby and also to set a sleep timer.

Important update: Gadgets have been canceled by Microsoft which has ended their support and will no longer work on future versions of Windows (Windows 8).
The official gadget gallery has been deleted and, to find other gadgets, you have to go to a different site like WindowsLiveGadget
Even Microsoft recommends disable gadgets in Windows 7 for security concerns although leaving them shouldn't have any negative effect on your computer.


In another article of this blog, others 15 recommended gadgets with weather, music, file management and fast access to Windows 7.