See Cartoons streaming on the internet, Sites and Apps for free 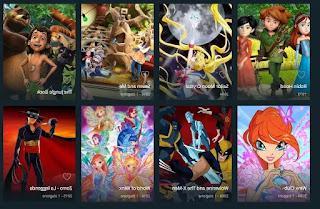 A bit like the TV series, today it is not necessary to wait for a cartoon to do it on TV because it may be available in streaming on the internet, for a fee or for free.
Speaking of the serial cartoons, both those of TV, the Americans Disney and also Japanese anime and manga, you can see them online for free on some websites, legal, which make entire series available in installments to be able to watch them on your PC or even on TV (via app or via Chromecast).

The sites, free and regular where search for cartoons to watch online in streaming are basically 5.

1) The most obvious site and app where you can go to search for episodes of your favorite cartoons, old and new, is definitely Youtube, where there are scattered episodes of each cartoon and then also regular channels that broadcast entire series.
Among these is the channel Yamato Corporation which broadcasts all the episodes of Japanese cartoons and anime such as Lupine, Dragon Ball, Fairy Tail, Food Wars, Highschool D&D, Holly and Benji and many others.
The good thing about Youtube is that it works on any platform, even all SmartTVs. The problem with Youtube is that, apart from rare exceptions like Yamato, Youtube hardly ever has the rights to stream cartoons like Disney's. Consequently, when looking for serialized cartoon titles, you have to be very careful because most, if not all, of the results refer to videos that do not hit anything, that are phony or fake or bad recordings made with the camera on the TV.
Much better then, it would be to search other sites, such as generic ones to find videos on the internet, to include different resources.

1BIS) Youtube Kids, the smallest children's TV, it can be used both as a website and as an application and has a lot of cartoons.

2) RaiReplay, both as a site and as an app, it is the best choice to find cartoons, because it is all free, regular and with the series ordered in installments. You can therefore find the cartoons broadcast on the Rai Yoyo and Rai Gulp channels, including Peppa Pig, Pj Masks, Masha and the Bear and then also Winx, Mia And Me, Saylor Moon, Peter Pan and Wolverine. The cartoons can be found on a special page of the site RaiPlay for children, where you can also find some animated films.

3) Cartoon provides apps for Android and iPhone to be able to watch all the cartoons broadcast by the Cartonito television channel.

4) VVVID, one of the best sites to watch free movies on the internet, also has a section dedicated to Japanese anime, of those not too suitable for children (usually VM14), in In your language or subtitled.
The VVVID site requires you to register for a free account to log in.

5) CrunchyRoll is a regular international streaming Japanese anime site that recently opened in the city as well. CrunchyRoll includes practically all the most followed Japanese cartoon titles such as Naruto, Boruto, Black Clover, Food Wars and many others, even old ones. While it is possible to subscribe for 5 Euros per month to see everything and without advertising, the episodes of the Anime can also be seen for free on the site, albeit with some limitations.

6) NetFlix, it is not free but still convenient for the relationship between price and offer (10 Euro per month which can also be divided between two people), it has a nice catalog of cartoons, some TV series and others that are Japanese anime for a more mature audiences with often noir, violent or fictional themes, often not suitable for children).
Like Netflix, many cartoons are also available on other streaming platforms such as NowTV, TimVision, Amazon Prime Video, Infinity TV and especially on Disney +, which offers all Disney and Pixar cartoons.

Finally, even if there are no videos to watch in streaming, it is worth taking a look at the site Cartonionline, specialized in the old cartoons of the 80s, where you can find all the information on the characters and the titles of the episodes.

See Cartoons streaming on the internet, Sites and Apps for free

Audio Video See Cartoons streaming on the internet, Sites and Apps for free
How to Watch DVD and Blu-Ray Movies in Windows 10 ❯

add a comment of See Cartoons streaming on the internet, Sites and Apps for free