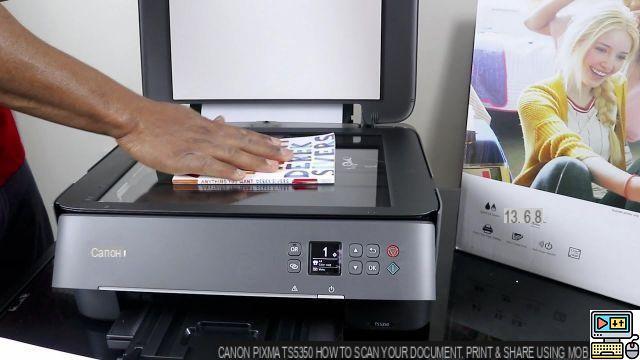 With its qualities and adjusted price, the Pixma TS5350 has established itself as a very popular model.

The Canon Pixma TS5350 is a multifunction inkjet printer. Equipped with a scanner, it is also capable of copying and scanning documents. Installed in the mid-range, it relies on its accessibility – both in terms of price and ease of use – to improve the recipe of the already very good Pixma TS5150 which it aims to replace. Its launch price is €79,99.

Canon renews here a design that we appreciate for its compactness and practicality. Only thing to know, the Pixma TS5350 is - like all the models in the range - more cumbersome when you unfold the rear paper loading module (20 sheets), when you pull the lower cassette (100 sheets) in mode A4 and put the front tray in place.


If you unfold all its flaps, the TS5350 immediately takes up "a little" more space.


From a cosmetic point of view, Canon has made some efforts and the TS5350 appears to be more refined than the TS5150. This is particularly the case with its adjustable control panel with a slightly more refined design, the small OLED display and the LED light strip informing us of the progress of the printing work.

A light strip brightens up the bottom of the control panel.


In terms of handling, the Pixma TS5350 relies on simplicity. Extremely simple to configure on its Wi-Fi network (or Wi-Fi Direct) by following the instructions of the Canon Print mobile application, it can display QR Codes on its small square screen, automatically sending us to pages of help in case of trouble.

The screen is too small, the controls are minimal, but it's still effective.

If the high contrast of this Oled screen is supposed to provide better visibility to the menus, it is on the other hand far too small to be sufficiently effective. Fortunately, the application (on mobile) or the drivers (on computer) allow easy access to most of the parameters that are useful on a daily basis.

At the rear, a hatch provides access to paper in the event of a jam. The USB and mains connectors are hidden in a corner.


We still regret the absence of card reader or USB host port. At least most cloud printing services are supported.

The paper cassette pulls out to be loaded with up to 100 standard sheets (80 gsm).

In standby, the Pixma TS5350 consumes no more than 0,9 watts. A figure that does not rise to more than 15 watts in the context of an A4 photo print. An appreciable sobriety that we find on the side of the noise pollution, which turns out to be moderate. In photos, the printer is silent (38,7 dB measured at about 1 meter). When printing a document of several pages, the noise rises to 48 dB, but remains in a good average and is in no way prohibitive in the context of occasional and family use.

New change of ink reference at Canon for this Pixma which uses only two cartridges (black and color). The TS5150 had already adopted this configuration compared to the TS5050 which worked with five separate cartridges. But here the Canon 570/571 series cartridges are still replaced by new models, the PG-560 and CL-561, available in normal and XL format. As always, it is the latter that must be purchased to limit the cost per page, calculated at 5,5 euro cents (0,055 €) in black and white and 11,7 euro cents in color, against respectively 3,7 9,2 and 5150 cents for the TS10. This is a bit above the average bar of XNUMX euro cents per page, but typical of this type of product only shipping two cartridges, the defect of which is to force the replacement of the color cartridge even if only one of the colors is sold out.

The Pixma TS5350 features a flatbed scanner with a maximum resolution of 1 x 200 dpi, with 2-bit sampling. A bit slower than the TS400, it still scans an A16 work document (5150 dpi) in 4 seconds, and a 100 x 13 cm photo (10 dpi) in 15 seconds. As for the copier, it takes 300 seconds to photocopy a document in black and white, and 16 seconds to do the same in color. It is, again, a little longer than on the TS17, but the result is also much more convincing: the contrast of the original documents is better preserved, as are the colors.

By going from five to two cartridges, the Pixma TS5150 partly sacrificed its colorimetric fidelity and saw itself downgraded in photos. Is this why Canon has developed new ink cartridges for this Pixma TS5350? Maybe... In any case, it works since the latter is amazing in this area. The average colorimetric drift measured is particularly low (delta E of 4,7), with the only real downside being the rendering of blue (9,3). Remember that beyond a delta E of 3, the human eye is able to perceive a difference in hue between the ideal color and the printed color.

The sharpness of the printed images is also of good quality. The only flaw in the photo is that the TS5350 isn't the fastest. It takes 52 seconds to print a 10 x 15 borderless photo, and 2 minutes for an A4 photo. A criterion of speed that you have to know how to put into perspective when the result obtained is up to the time spent, as is the case here.

Bad news, Canon has not found a way to correct one of the recurring faults of its consumer inkjet printers and here again limits the print rate by forcing pauses every 2 or 3 pages when printing. printing of multi-page documents, to allow the ink to dry better and to avoid streaks. This is why the Pixma TS5350 prints 10,9 pages per minute (ppm) in color according to our tests, but only 6,3 ppm in black and white. In automatic duplex, it delivers 4,9 ppm.

Honorable figures, especially since we are talking about a versatile home printer, but a little tainted by the behavior of the printer in black and white, while next to that the rendering of printed documents is very good (good sharpness, solid tints and gradients well managed, contrast that makes it easier to read, etc.).

Canon improves its overall recipe with this Pixma TS5350, which wins a star compared to the TS5150 thanks to better photo skills. Despite a few small faults, it is an accessible and versatile model, more than recommendable in this price range.

add a comment of Canon Pixma TS5350 review: an easy-to-use and photo-savvy printer