Download TomTom Go App for Android and iPhone for free 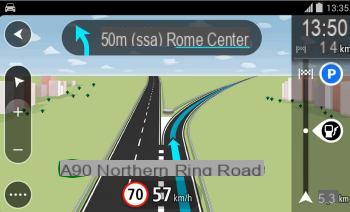 The world leader in satellite navigation systems TomTom, to avoid losing more and more market share to Google Maps, Apple Maps and other navigation apps for smartphones, has decided to release an app for free (for now) for iPhone and for Android, completely free.
The app is the original TomTom navigator, complete with downloadable maps for cities, Europe and the United States.
Tomtom takes advantage of constantly updated TeleAtlas maps and also provides a real-time traffic detection service.
TomTom app per Android e iPhone it includes all the functions of the satellite navigator, with carefully optimized calculated routes, a route planning menu and offline maps that can be used even without an internet connection.

The app TomTom Go Mobile o TomTom Navigation and Traffic you can download for free for all the smartphone Samsung, HTC, LG, Nexus e Android.
In 2016 it was made the app is also free TomTom Go Mobile for iPhone

It must be said that the program is not completely free, but it has limitations that can only be unlocked by paying.
To be precise, you can use the first month for 250 kilometers, then for 75 kilometers you can use TomTom as a free satellite navigation service.
If you want to use more, you will pay for the necessary kilometers or with an unlimited kilometer subscription for one month, one year or even three years.

Open the app for the first time, you can download the first map which can be cities, Europe or USA.
The download of the city map is 700 MB so you have to use an unlimited and non-pay-as-you-go wifi connection.

The app graphics are typical of the TomTom, with different color combinations and double 2D or 3D views depending on your preferences.
On the main screen you can read the name of the street you are on, the name of the street you are about to cross and the names of the adjacent streets.
The zoom of the 2D and 3D map can be adjusted manually or automatically depending on the detected speed.
The points of interest also appear on the map which can be petrol stations, bars, banks or other to choose from in the settings.
TomTom App for Android and iPhone includes audible warnings for exceeding the speed limit and can warn us when approaching areas where you need to slow down such as schools, hospitals, etc.
The navigator's voice is in in your languagen.
To access the main settings just press any area of ​​the map displayed.
Overall there are all the typical functions of the classic TomTom navigator, with the demo of a route, the choice of the cheapest roads and those without traffic.

What you need to understand now is whether TomTom Go is better than Google Maps for Android or Nokia Here for iPhone and Android
In general, it must be admitted that TomTom's app is more powerful, faster and more complete with satellite navigation functions.
The most important key feature is that the maps are on the phone's memory, and while Google Maps allows you to download parts of the maps for offline access, it doesn't work as a navigator.
Google Maps without internet can only be used as a map while TomTom Go without internet and, therefore, abroad, it also works as a GPS navigator.
In this it is therefore similar to NavFree, cited between best android apps with free offline GPS maps and navigators
However, Google Maps is more powerful in choosing the best route based on traffic (thanks also to the integration with Waze) and in the ease of finding alternative routes.

For free use, TomTom Go, if you have space on your smartphone's memory or SD card, deserves to be downloaded and kept ready for when you go abroad or when there is no network.

Download TomTom Go App for Android and iPhone for free