How to delete copied messages in WhatsApp

From OnlyWhatsApps, we want to show you how to delete copied messages on WhatsApp for Android, iPhone and PC. The only thing you will need is your device, Internet connection and WhatsApp. You will be able to delete any Image, Message, Chat, Files... and we will not work with the Backup, just the Apps that come on your device. Enter and find it all!

Have you copied a message received in a WhatsApp chat on the memory of your smartphone to give it back to a friend of yours, but now you're terrified to paste it back into the same conversation, thus risking to make a fool of yourself? Do not worry, you can easily remedy this by freeing them (or replacing them)notes(orclipboard) of the device, ie that dedicated area of the operating system where it ends all that is copied (or cut) through the system functions. Below I show you how to complete this operation is on Android that of iOS. 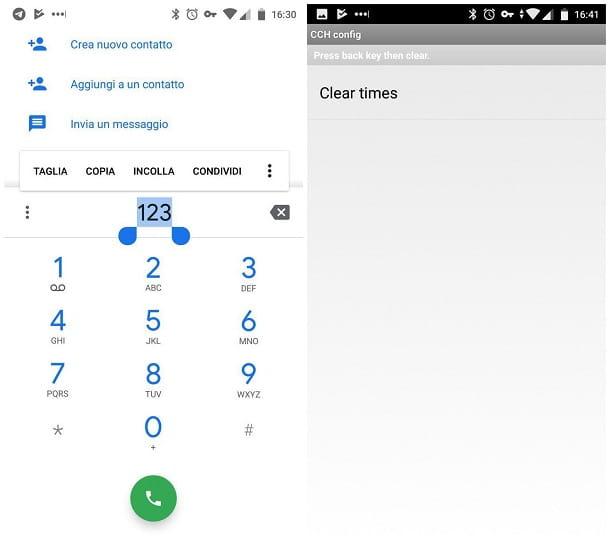 If you have anAndroid device, the fastest way todelete copied WhatsApp messages is to replace the contents of the clipboard with a random sequence of numbers: to do this, press the icon in the form ofheadsetto open thePhone app, tap onnumeric keypad located at the bottom right (in practice, you must start the manual dialing of a number) and type a sequence of digits of your choice.

When you have finished, double-tap on the numbers you have just entered and, in the small menu that appears on the screen, select theSize item or theCopy voice: in this way, you will replace the previously copied message with the highlighted numbers; consequently, if you were to use the Paste option by mistake, you will see the previously entered numbers appear on the screen and not the "offensive" chat message.


If you wish, you can do the same operation using "random" text as a filler: to do this, start any application that allows you to type something (e.g.Messaggi), access the text input field, type a random sequence of characters and, after double-tapping it, select theCut Paste option from the menu that appears on the screen: the result is practically identical to the one seen above.


Alternatively, you can delete the message from the Android clipboard using theDelete Clipboard History app, available for free on Google Play. Once the app is installed, all you have to do is start it (it is identified by the nameCCH Clear): after a few moments, the Android clipboard memory will be restored, along with the WhatsApp message copied and replaced by an empty space.

Finally, you should know that some versions of Android (such as those installed on differentSamsung Galaxy, for example) have an integrated functionality to manage and delete notes: to access them, start theMessaggi app, taponText inputarea and then performs a long tap on it.

At this point, choose theclipboard option From the small menu proposed to display the list of the most recently copied items: identify the WhatsApp message of interest, make a long tap on it and presses thedelete button to "download" it from memory. Alternatively, you can delete the entire clipboard by tapping thebasket icon placed at the top of the list. 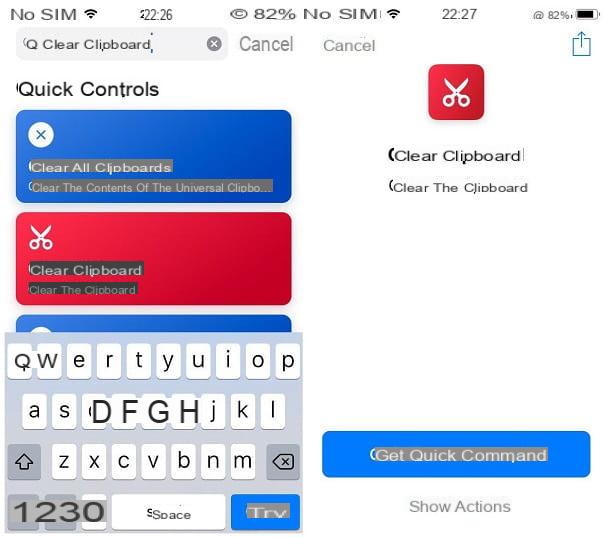 WithiOS, so foriPhoneandiPad, the speech is very similar to that seen on Android: the simplest (and most immediate) method to get rid of a copied WhatsApp message is to "replace" it with a random sequence of characters.

To do this, start an app that allows you to write text, for example, theNote: app, retrieving it from the home screen of the device, tap, if necessary, on theContinue button and use the button located at the bottom right (the one in the shape of asquare with pencil) to create a new note. At this point, type one or more letters in the text area, make a long tap on the latter and select theCopy item from the list of proposed options and voila: the previously copied message will disappear from the clipboard!


Alternatively, you can clear the system clipboard using Apple's Switch Handles app (formerly known asWorkflow), which allows you to set up "quick actions" to be performed by native iOS procedures. If you don't already have it, you can get the app by downloading it for free from the App Store.

Once you have obtained the app, launch it through the icon located on the home screen of the device, press theStart button and tap the gallerybutton located at the bottom right. Once this is done, type the sentenceTransparent Clipboardin the search field located at the top, presses the box of the same name displayed on the screen (marked by a scissors icon) and tap the Get a quick commandbutton to add it to the library immediately. 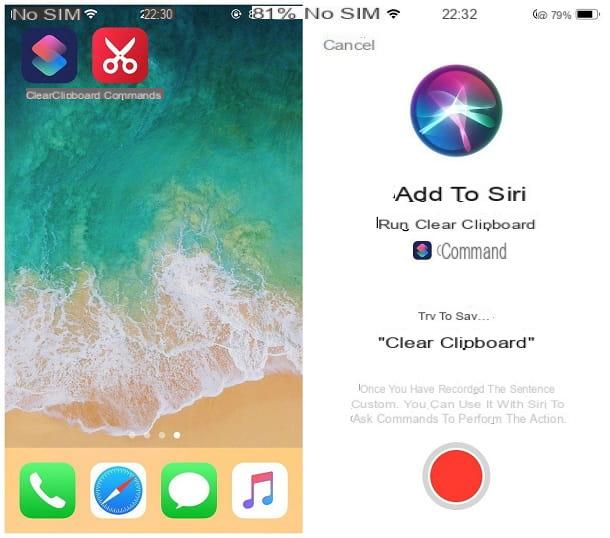 Now, to add a shortcut directly to the home screen, tap the librarybutton located at the bottom, tap the button (...)placed on the edge of the icon related to the newly added action and press the share button (Thesquare with up arrow) placed at the top. Then tap the share button again, choose theAdd to homeitem from the proposed menu and press the Addbutton located at the top right.

The game is done: from this point on, you can quickly empty the contents of the clipboard (along with the WhatsApp messages saved on it) by tapping the icon Clear clipboardpreviously created (which will also be available in the widget of the Commands app available in the iOS widget menu); when you're done, you can go back to using the device as usual.

Note- If desired, you can combine the newly created action with a Siri shortcut. To do this, launch theSwitch Handles app, tap thelibrary button located at the bottom, tap the icon of the previously imported action and press theswitch-shapedbutton placed at the top. Finally, click on theAdd to Siriitem and follow the on-screen instructions to record a new voice command.

Do you usually rely on WhatsApp for PC or WhatsApp Web and are looking for a method to remove copied messages? The speech is similar to what has already been done for smartphones and tablets: even desktop operating systems (such as Windows and MacOS, for example) have a memory area dedicated tonotes(clipboard), designed to contain everything that is cut / copied using the appropriate functions. As you can easily imagine, todelete WhatsApp messages copied to the PC just delete the contents of the system clipboard: below I will explain how to proceed both on Windows that of MacOS. 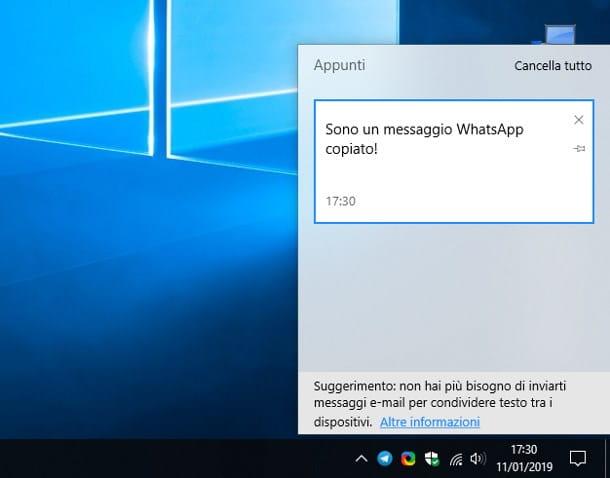 If you have it availableWindows 10, you can delete the entire contents of the system clipboard in a few moments, thanks to the "advanced" manager installed "by default" in the operating system.

How? I'll explain in a moment. Using the keyboard, press the keys at the same timevictory(the one with the Windows flag) andV: if everything went well, you should see the clipboard manager (and any messages inside it) on the right side of the screen. To delete the contents of the clipboard, simply click theDelete All button and you're done.

If the method described above does not work, or if you haveWindows 8.1or earlier, you can delete the clipboard by manually issuing a specific command. To do this, open theRun applicationwindow by pressing the key combinationWin + R, enter the command inside itcmd / c echo off | shorten and click theOK button: if everything went well, a command prompt window should open and close in a few moments, a sign that the Windows clipboard has been emptied (and WhatsApp messages residing inside it have been destroyed). 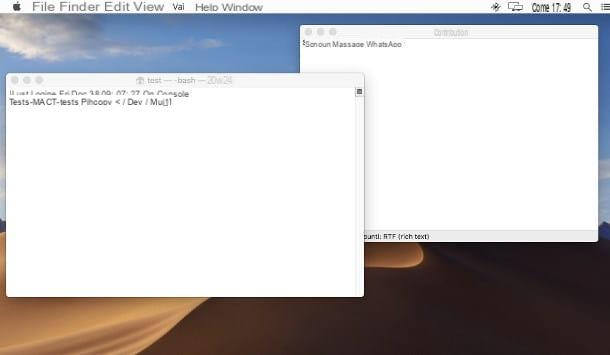 Unlike what we saw for Windows 10, MacOS does not have a built-in functionality to delete notes: however, it is possible to complete this operation in an extremely simple way using the Terminal on Mac.

First, open the Mac clipboard viewer by clicking on theEdit> Show Clipboard menu: this way, you should see on the screen the contents of the entire clipboard saved on macOS, including the "offending" message to be destroyed.

Once this is done, start theTerminalby calling it from theLaunchpad'sMore folder (therocket-shaped icon attached toDock Bar), type thepbcopycommandand press theSendKeyboard button: if everything went well, the operating system's clipboard should be emptied instantly. You can find out by looking at the clipboard window, which was opened earlier.

How to Delete a Message (or All) from WhatsApp for everyone. 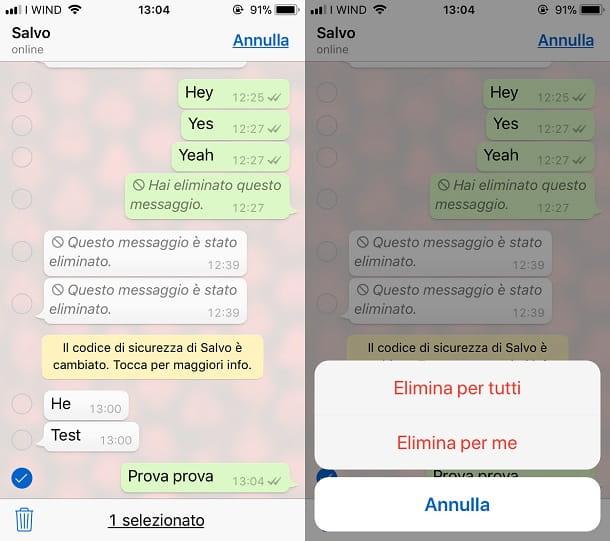 Wait, you're telling me that you did not find the steps described in the previous sections of this guide useful, since, instead, you are looking for a method todelete messages received on WhatsApp?

You should know that, even in this case, it is an extremely simple operation: what you have to do is launchApplicationwhatsapp on your smartphone or tablet, access thechat on which you intend to intervene and perform along tap on the message in question; if you stand on Android, you can select multiple messages together by subsequently tapping on each of them; if, instead, you're oniOS, you must select the itemdelete among the proposed options and place a check mark next to each of the messages you want to delete.

When you're done, tap thebasketicon is displayed at the top (on Android) or at the bottom (on iOS) and, finally, specify whether you want to delete only the messagefor youorfor all members of the chat. If you need a hand, I suggest you take a look at my tutorial on how to delete messages from WhatsApp, in which I gave you more details on the steps to follow to get rid of messages that you find "uncomfortable".

add a comment from How to delete copied messages in WhatsApp

96%
We have been able to provide in 96% of times, the solutions that users were looking for when consulting our page.