How to find the title of a song

How to find the title of a song from the music

Find the title of a song from the music, via smartphone and tablet, it is really very simple: below I will show you how to proceed using the tools included in Android and iOS. If, on the other hand, it is your intention to act from the computer, I refer you to reading the next chapter of this guide. 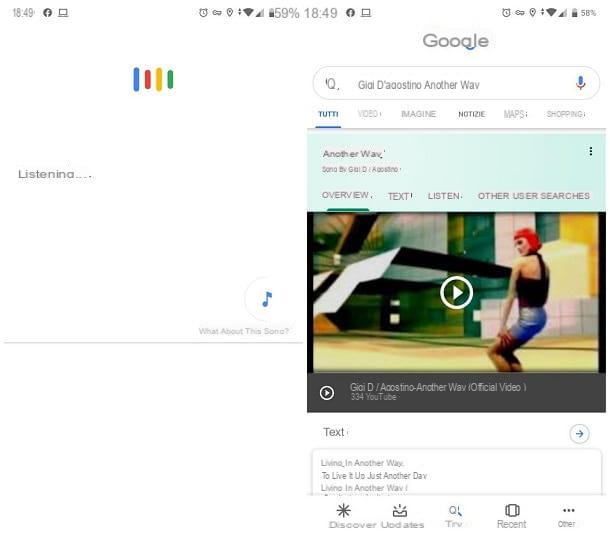 If you use a smartphone or tablet Android, you can easily go back to the title of a song, simply by having it "listen" to Google Assistant. The service Sound search Google, in fact, uses the Shazam database (famous music recognition system) in order to provide information about the songs acquired through the device's microphone.

Using Google Sound Search is very simple: first, bring the phone's microphone close to the playback source of the song you want to recognize (the clearer the audio, the greater the chances of a positive result), then tap on the Google bar located on the Home screen of the phone and press the button microphone to enable Google Assistant voice recognition.

Alternatively, you can invoke Google Assistant by long pressing the key Home smartphone or tablet, or by saying the voice command "OK, Google" (provided that it has been previously activated on the device in use). After a few moments, if everything went well, Google should "perceive" the background song and propose to recognize it automatically, using a button in the shape of a music note.

When you see it, press it and wait a few seconds, always keeping the phone's microphone close enough to the audio source: with a bit of luck, the song should be recognized and Google should show you a tab containing some useful information about it ( year of release, membership album, YouTube link, lyrics - if available, and so on).


If you want to quickly access the service Sound Search of Google, you can add its widget to the Android Home screen: to do this, make a long tap on an empty spot on the latter, choose the item widget from the on-screen menu and locate the button Sound Search, located in correspondence of the box Google.

When you have found it, make a long tap on it and drag it to an empty spot on the Home screen: starting from this moment, you can start the Google Assistant audio search by simply pressing on the widget you just created. 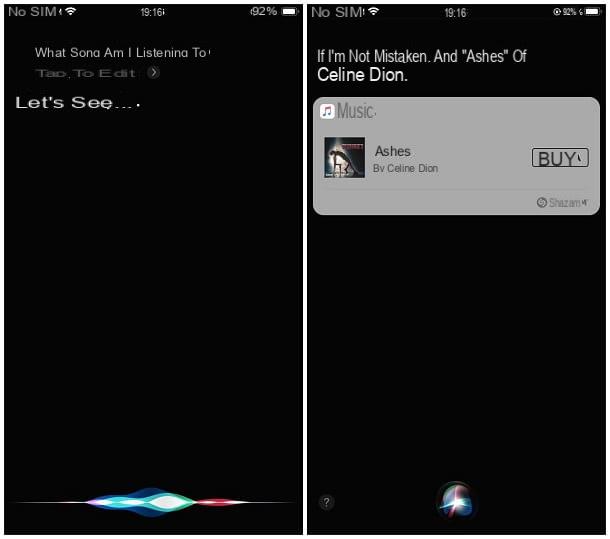 Things, come on iPhone e iPad, work quite similar to what has already been seen for Android, as Shazam's audio recognition service has been acquired by Apple and integrated into Crab.

To be able to use it, first bring the device close to the sound source and start Siri using the method most congenial to you: by saying the voice command "Hey Siri" (provided that you have previously enabled the appropriate option from the section Settings> General> Siri of iOS or iPadOS), by long pressing the side button on iPhone X and later, or by pressing and holding the key Home on iPhone 8 Plus and earlier.

To start voice recognition, ask Siri the questions "What song am I listening to?" or "What song is it?" or similar. After a few moments, Apple's voice assistant should recognize the song, giving you a tab containing the song's title and artist, lyrics (if available), and a button to buy it from Apple Music. Easy, right?

If you prefer to use Shazam without using voice commands, you can install the official app of the service on your device and press the button in the center of the screen, in order to start the recognition of the song being played.

Note: if you wish, instead of using voice commands, you can ask Siri to recognize the song by typing the question via the keyboard.

How to find the title of a song online

If you prefer to use your computer, you will be pleased to know that there are a large number of online services that allow you to recognize a song by simply “listening” to it from your PC's microphone. One of the best websites of this type is Midomi, a portal dedicated to song recognition that can be used for free through any browser compatible with the Flash Player plugin.

Accessing the service is really easy: to begin with, connect to its main page and, after having brought the microphone of the PC close to the audio source, click on the button Click and sing or hum located in the center of the page and press the button Allow, if requested, to authorize the site to use the microphone.

Once this is done, let Midomi "listen" at least 10 seconds of the song being played, after which you can click on themicrophone icon to start song recognition: with a bit of luck, the site should show you the results of your search, giving you the title of the song, the album it belongs to, the author and other useful information.

Note: Midomi's engine, in some cases, is also able to recognize songs hummed o in tune with your mouth closed. To take advantage of this feature, you simply have to start the music recognition, as I showed you earlier, and then hum or tune the song, getting close enough to the PC microphone.

If Midomi did not satisfy you and, to recognize the songs you listen to, you are willing to install an additional program on your PC, you can use the official client of Shazam for macOS: once downloaded from the store of your computer, start it, press the button with the program logo and let the Mac microphone capture the song you want to identify.

How to find the title of a song from a video 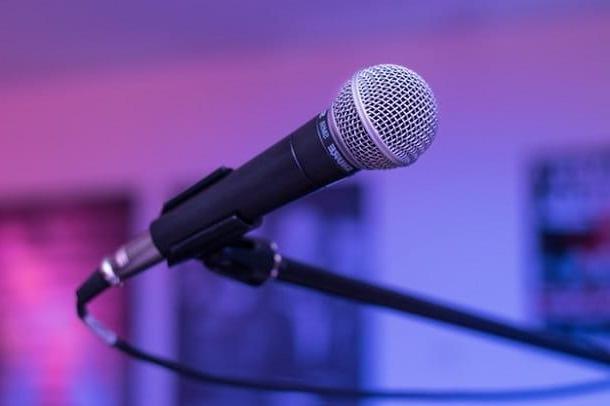 You received a video containing a background song you like, but just can't remember its title? You must know that, until recently, there were online services able to correctly recognize songs contained in multimedia files, or in online videos. To date, however, the functioning of these sites is not the best, due to some limitations imposed by the managers and the huge amount of invasive and harmful ads, therefore I strongly advise against using them.

What you can do, however, is to follow the steps I indicated in the previous chapters of this guide to start recognizing the song contained in the movie, via smartphone, tablet or PC. In practice, you simply have to start the video containing the song of your interest and use a second device with a microphone to allow background audio recognition. 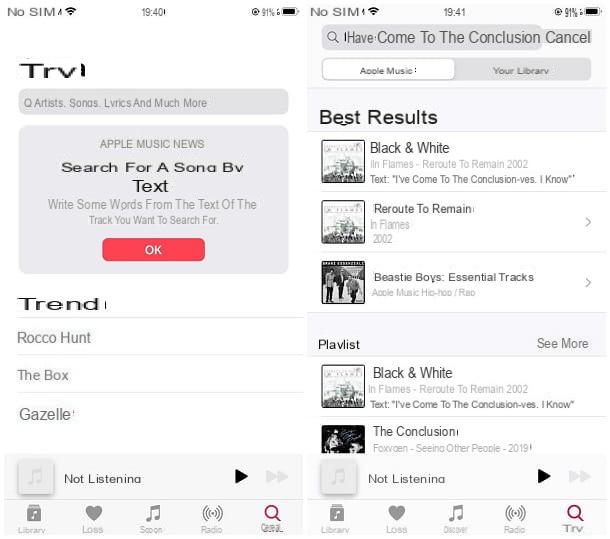 If it is your intention to go back to the title of a song knowing only about it some words, know that the Internet can come to your aid in several ways! To date, in fact, it is sufficient to use the right tools to ensure that, within a few seconds, the "pieces" of the song you know can be transformed into a complete title!

For example, you can do a Google search by typing [song lyrics] lyrics or [lyrics of the song] lyrics: With any luck, the search results page should point you to the right title.

Alternatively, you can use Apple Music, Apple's music streaming service (accessible through the Music application on iOS, iPadOS and macOS and through iTunes on Windows), which allows you to find songs by searching their lyrics: to do so, start the Music or iTunes application (making sure you have activated access to Apple Music) and simply start a search by typing the words of the text in the appropriate box.

How to find the title of a song by singing it 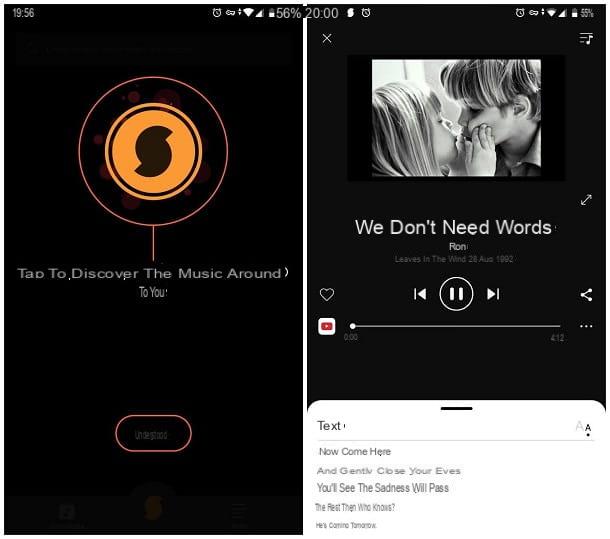 Do you have in mind the reason (and possibly the lyrics) of a song and would you like to go back to its title by “humming it” to your smartphone or tablet? If so, I recommend using the app SoundHound: downloadable for free from the Android, iOS and iPadOS stores, this application allows you to recognize songs in the "classic" way (that is, making them listen directly to the device from which it is used), but also starting from songs sung, hummed, in tune or , sometimes, even whistled.

After downloading the app from the reference store of your device, start it and allow it to use the microphone, responding affirmatively to the warning that appears on the screen. Afterward, tap the button I got it, to access its main screen and, to start listening, tap on orange button placed in the center of the display.

When listening has started, sing or intone the song of your interest for a minimum of 10 seconds, or until the message appears Tap when done; touch the orange button again, to stop the audio acquisition, and wait a few seconds for the page containing the most relevant results with the song you tune to be shown.

Once recognized, tap on the preview of the identified song to start playing it through the music app installed on the device (YouTube, Spotify, Apple Music and so on) and view, if available, also the text in karaoke format.

Alternatively, you can achieve the same result with the Google app for Android: to do this, start it, press the icon of microphone (grant the necessary permissions, if required), tap on the item Search for a song and hums or whistles the song to find.

How do you say? Would you like to get the same result, but from your computer? In that case, I recommend that you use the portal Midomi, which I told you about in one of the previous chapters of this guide.

How to find the title of a song