How to turn Android into iPhone 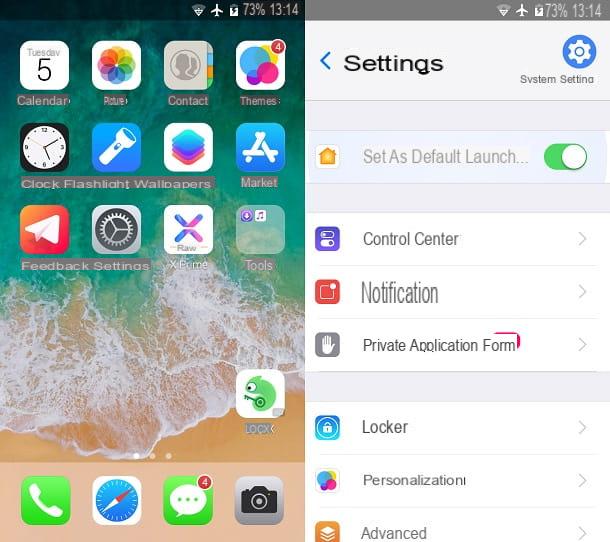 The first application I want to tell you about turn your Android smartphone into an iPhone è X Launcher, available for free on the Android Play Store. This app is a launcher that allows you to change the aesthetics of the default application icons and tools to the typical iOS one; it also owns a Control Center identical to the one on the iPhone.

If you want to download X Launcher, reach the link I provided, so as to access its dedicated page on the Play Store, and tap the button Install and then Accept. At the end of the installation, do not start the application, but reach the settings of your Android smartphone by tapping the icon with the symbol of a gear that you find on the home screen.

Scroll the screen and search for the entry Home page, to access the smartphone launcher configuration. Then select X Launcher and go back to the home screen. However, this procedure may be different on other devices, depending on the Android model you own. If you do not find any changes to the interface of your smartphone, restart it by pressing and holding the key Power on / off and pressing on Restart from the window that opens. 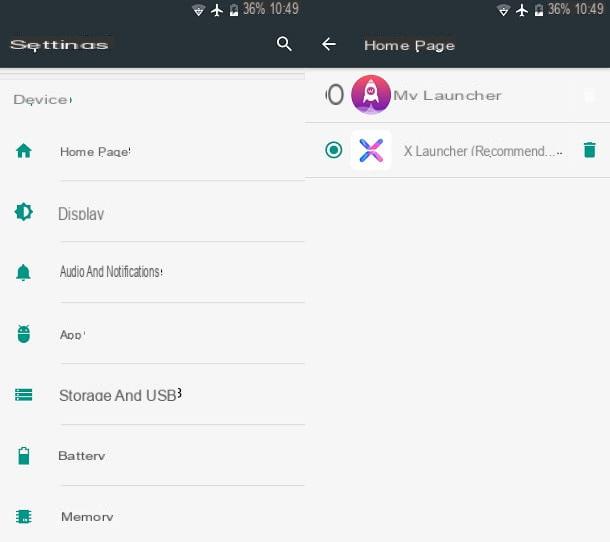 The home screen of the Android phone should now be completely changed, with an icon style similar to that of iOS. The features of this launcher, however, are not limited only to changing the icons, but there is also a built-in Notification Center it's a Control Center reminiscent of those on the iPhone.

To access the Notification Center, swipe from left to right to view it, while if you want to access the Control Center, swipe from the bottom to the other from the center of the smartphone display. Through this last panel, you can manage the activation of some features, such as Wi-Fi, Bluetooth, airplane mode or the flashlight, just to give a few examples, or adjust the volume and brightness levels. 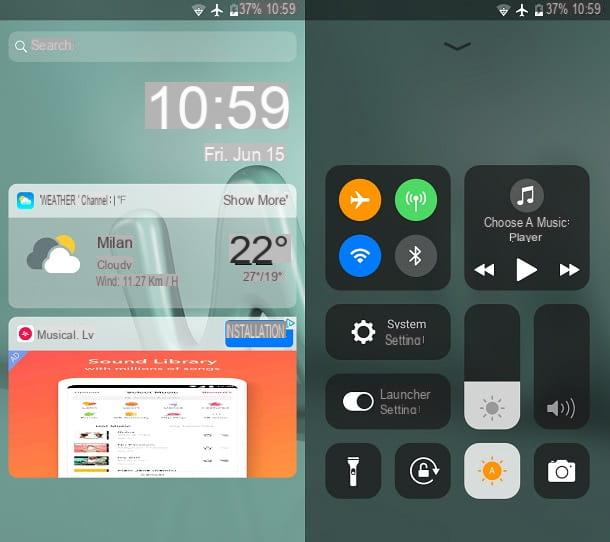 If you keep pressing on the icon of a third-party application, it will start to wobble showing a small one X on it: this feature only allows you to remove an application icon from the home screen without uninstalling it, as opposed to what happens, instead, on the iPhone.

Unfortunately X Launcher presents advertising banners. To remove them, you need to purchase the Prime version of the app at the cost of €1,59, which also guarantees additional features, such as the ability to open the Control Center when you are inside an app or the ability to hide apps to protect your privacy. 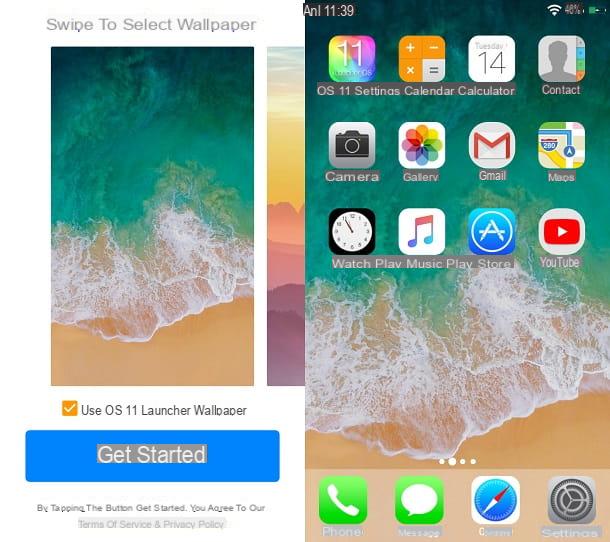 Another application to turn an Android smartphone into an iPhone is OS 11 Launcher, downloadable for free from the Android Play Store. As for the app I told you about in the previous paragraph, this also allows you to change the look of your Android smartphone to one similar to that of iOS. In addition, it offers some features typical of an iPhone, such as the Notification Center and Control Center.

To use OS 11 Launcher, access the Play Store, via the link I provided, and tap the button Install and then, at the end of the download and installation, click on apri. Once the application is started, choose one of the wallpapers proposed and then tap the button Get Started. Follow the tutorial that is shown to you to grant access to some permissions to the app: then tap on OK and, in the panel you just opened, move the lever from OFF a ON near the wording OS 11 Launcher, then pressing on Allow.

Now, then tap on again OK, in the screen that is shown to you, to be redirected to another tab of the Settings of Android; press on the item OS 11 Launcher and move the lever from OFF a ON to allow access to usage data. Returning to the home screen, then tap on the icon Settings (the icon with the symbol of a gear) and go to the section Home page; then choose the item OS 11 Launcherby checking the box alongside.

The configuration is now complete: you just need to go back to the home screen of your Android smartphone, to immediately see the changes just made, with a graphical interface similar to that of iOS. 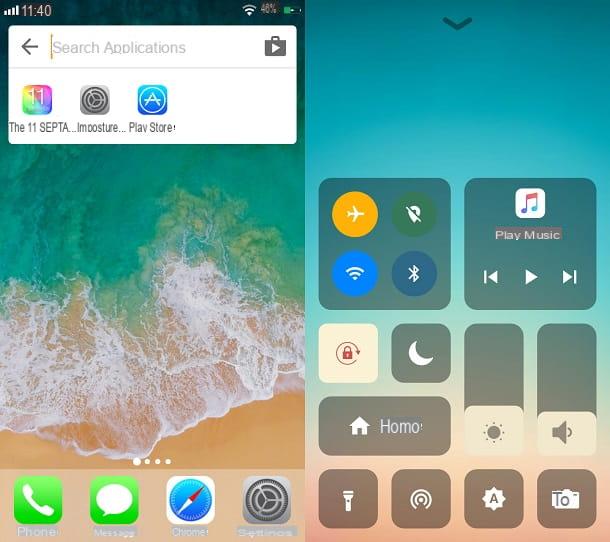 This application integrates perfectly with the Android system, emulating the functionality of the iPhone interface very well. In fact, by swiping from the bottom to the other near the bottom edge of the screen, you are shown the Control Center, for the management of some quick features, such as the activation and deactivation of airplane mode, GPS, Wi-Fi or Bluetooth; in addition, you can adjust the volume and brightness levels. By then swiping from left to right, you can access the Notification Center, which also includes a search bar, in a similar way to the one found on the iPhone. 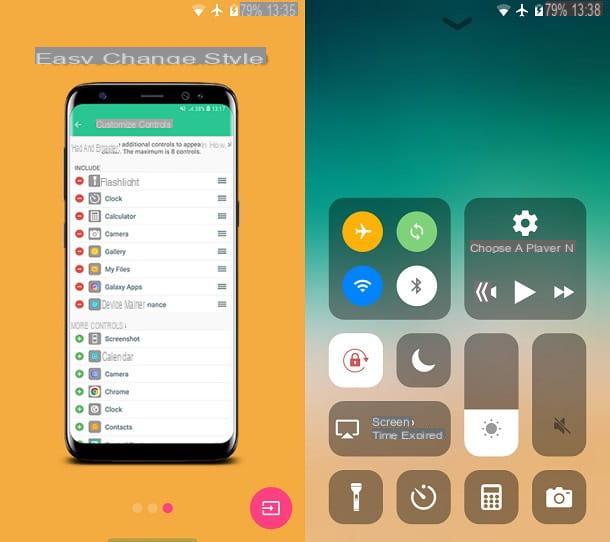 If you don't want to change the theme of your Android smartphone by downloading a launcher, you can install apps that simulate some iPhone features. An example is Control Center iOS 11 which, as its name implies, emulates the City Center di control which you can find on iOS.

If you are interested in having Control Center iOS 11 on your Android smartphone, I suggest you reach the link I gave you, which refers to its free download from the Play Store. Then tap the button Install, su Accept and finally, su apri.

So start the application, swipe from right to left to scroll through its presentation and tap the button with the arrow symbol that you find in the lower right corner. On the main screen of the app, you will be shown a screen with the request for access to the Android permissions; then tap on OK and, in the section of Settings, move the lever from OFF a ON to allow the permissions that the app needs to function properly. 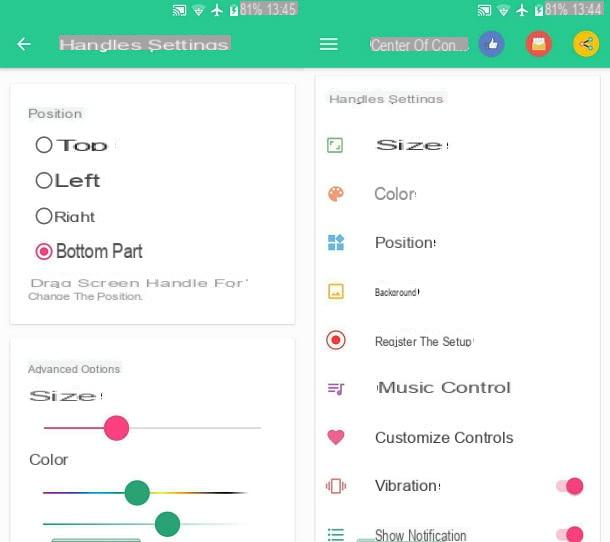 Now you simply have to swipe from the bottom up, near the bottom edge of the screen, to display a Control Center similar to the one on the iPhone. Through this panel, you can activate and deactivate airplane mode, Wi-Fi or Bluetooth, and you can also adjust the volume and brightness of the screen. There are also quick start icons for activating the flashlight, camera or calculator.

The downside of this application is the presence of fairly invasive advertising which, unfortunately, it is not possible to remove even through in-app purchases.


Other solutions to turn Android into iPhone 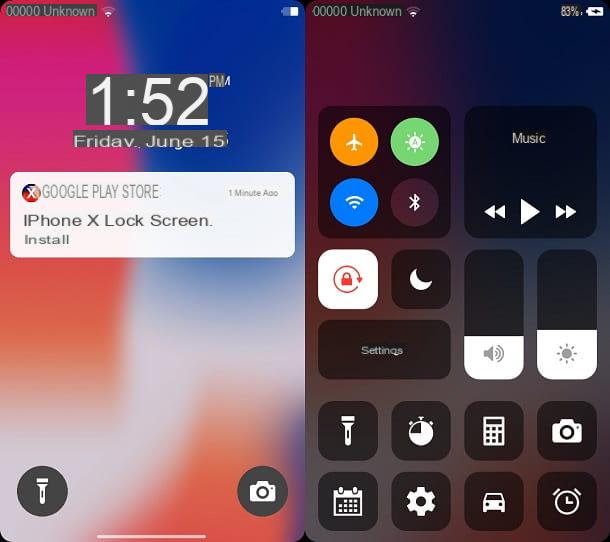 In addition to the applications that I have proposed to you in the previous paragraphs, there are others that can help you turn an Android smartphone into an iPhone. Below I will show you some apps that you can download on your device to achieve your goal.

Restore the default look of Android

If you want restore the default look of android, you can perform two operations: uninstalling the third-party launcher or disabling it.

In the first case, access the settings of Android by pressing the icon ofgear present on the home screen, go to App, select the launcher and press the button Uninstall. Alternatively, start the Play Store Android, tap the menu icon and choose the item Le mie app ei miei giochi.

From the list of applications on the tab Install, look for the launcher you downloaded earlier, tap on it and then press on Uninstall, so as to directly remove the application from your Android smartphone. 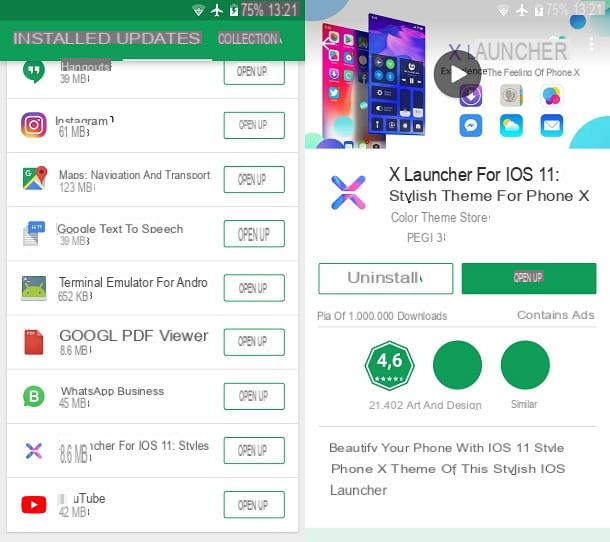 To disable it instead, since some launchers interpose their configuration panel before accessing the Settings of Android, swipe from top to bottom near the top edge of your smartphone screen and tap the icon with the symbol of a gear, which you find in the upper right corner. This way you will have immediate and direct access to Settings from your device. 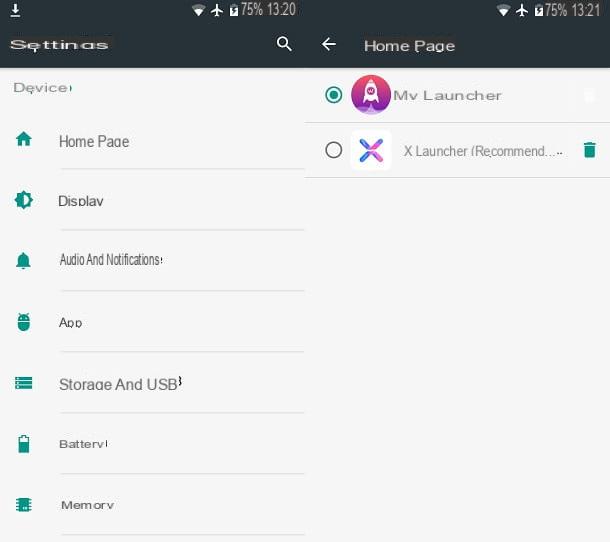 From now on, the procedure may be different depending on the model of the Android phone in your possession. Scroll through the entries until you identify the one named Home page and tap on it.

You can then view, in this section, all the launchers on your smartphone; then tap on the box near the default Android theme and return to the home screen, using the button with the symbol of a circle located at the bottom edge of the mobile phone screen. Easy right?

How to turn Android into iPhone

add a comment of How to turn Android into iPhone