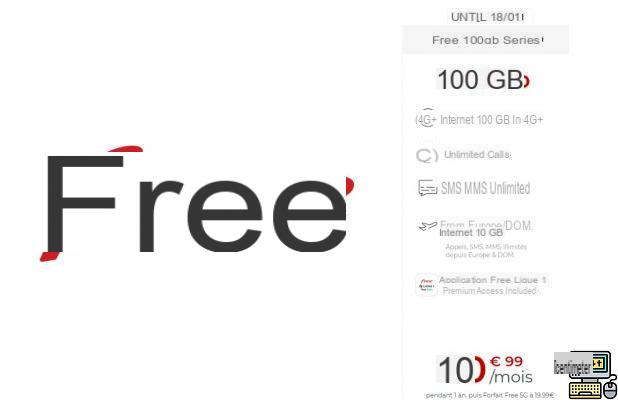 To say that Free threw a swathe into the pool of mobile offers when it arrived in 2012 is a mild understatement. The company caused a real tidal wave by obtaining the status of fourth mobile telephone operator after establishing itself as an essential Internet access provider. Its aggressive pricing policy has forced its competitors to adapt, to the delight of consumers. Discover here the best free mobile plans to get you a cheap mobile plan.

Not content with its success as an Internet service provider, particularly thanks to its Freebox and the many services offered, Free has launched with a bang in the mobile sector. The desire of Xavier Niel, its CEO, has always been to maintain a simple offer. If since then it has been widely diversified for the domestic Internet, the Free Mobile offer has remained relatively simple with only 2 very distinct offers and a special series.

Between obtaining the 3G license at the end of 2009, the 4G license in September 2011 and the launch of the Free Mobile commercial offer in January 2012, competing operators sought to prepare the ground. It must be remembered that Free has a reputation as a pirate, in the good sense of the term, which his boss, Xavier Niel, regularly highlights. Free has always sought to imagine aggressive solutions, off the beaten track. It was therefore not to be expected that the company would settle down as a mobile operator. On the contrary even, as the last arrival, she had to hit hard. And she did. With an offer at 2 euros, absolutely unprecedented or even unthinkable at the time, and another at less than 20 euros promising unlimited Internet, all without commitment, it was a guaranteed disaster for other operators. Better, the 2 euro package is offered to Free subscribers, while the 19,99 euro package decreases to 15,99 euros monthly. Thanks to this, in just over a month, Free Mobile had already obtained 4% market share with more than 2 million customers. If SFR created RED by SFR, Bouygues launched B&You and Orange imagined Sosh, it is directly in response to the arrival of Free Mobile on the market. All operators had to try to avoid a hemorrhage of customers to the newcomer, even if it meant offering more attractive offers with lower margins.

The only operator that has chosen a different path is Orange. The incumbent operator has signed a partnership with Free Mobile in order to rent it access to its 2G and 3G networks. Thus Free Mobile customers can connect to Orange base stations in areas not yet covered by the new operator. This also allows them, in the worst case, to make voice calls or to send and receive SMS via the 2G network for which Free has no frequency. However, this contract is limited by ARCEP. Indeed, a new operator is forced by the Regulatory Authority for Electronic Communications and Posts to deploy its own antennas in order to have a network covering a certain proportion of the population and the territory. This roaming was seen by Bouygues and SFR as favoring new entrants, whereas these two companies had to invest massively to deploy their network. While it was supposed to last only 6 years, this roaming agreement has already been extended by Orange and Free, who both find it beneficial. Having to stop at the end of the year, the 2 operators have once again agreed to continue working hand in hand until December 31, 2022. ARCEP is currently consulting market players before to give its final opinion. In addition, excellent news for subscribers who may have had difficulty transitioning from an Orange antenna to a Free antenna, the operator has updated its infrastructure since 2019, now allowing a faster return to the Free Mobile network. being faster since it is not restricted, unlike the Orange 3G network, which is limited to 384 kb/s.


At present, Free Mobile has more than 17 000G antennas and 3 15G antennas in service out of more than 500 authorized to transmit. Thanks to them, Free claims a 4G coverage rate of 19% of the Spanish population and 600% of the territory. In 3G, coverage is slightly lower, with 99% of the population for 94% of the territory. As with other operators, 4G coverage is currently non-existent since the Spanish government has not yet put the dedicated frequencies on sale. If Free gets impatient, Bouygues would prefer an opening of the auction only at the end of the year or even in 95.

Currently, Free offers 2 non-binding offers. This means that all you need is a registered letter or a simpler change of operator by number portability to terminate the contract. At the time of subscription to the subscription, it will be necessary to buy a SIM card, charged 10 euros. It is possible to obtain it from the mobile.comee.com website, but also in one of the 85 Free Center stores and even through one of the 1000 interactive terminals available in certain local shops, including many news outlets.

With no commitment over time, the “Free Package” is offered for 19,99 euros per month. It allows unlimited 4G+ Internet access. The behavior of the package is slightly different for those who have a Free subscription for their home Internet. Indeed, in this case the price drops to 15,99 euros per month and above all 4G+ is really unlimited without a drop in speed once the 100 GB of data has been consumed, 3G on the Free or Orange networks will see its transfer speed reduced. once this level is reached.

This package is great for anyone who travels regularly or has friends or family abroad. Indeed, it is possible without any additional cost to call from Spain the landlines of 100 destinations and even the mobiles of the United States, Canada and China. Thanks to roaming, it is possible to use your smartphone at no additional cost from a large part of the world. It is indeed possible to access the Internet up to 25 GB per month from 65 countries, including all of North America and practically all of Eurasia. Even better from Europe, the overseas departments, the United States, Canada, South Africa, Australia, New Zealand and Israel, it is possible to make calls and send SMS and Unlimited MMS to all phones in the country and in Spain.

However, it will be necessary to pay attention to a detail which may be important for those who have a somewhat old smartphone. Indeed, for a 3G smartphone only, Internet traffic is limited to 3 GB before being slowed down.

The Free Package at €2

This small package will meet users with the most limited needs. If it offers unlimited SMS from Spain, overseas departments and Europe as well as FreeWiFi access, the rest is greatly reduced compared to the other 2 packages. Calls are thus limited to 2 hours per month and can be made to mobiles in Spain, Europe, the overseas departments, the United States, Canada and China or to landlines in around a hundred destinations. Beyond these 2 hours of call, it will be necessary to count 0,05 euro per minute of additional call. While this price is reasonable, the same cannot be said for the megabytes that exceed the 50MB limit available in the plan. Indeed, each additional megabyte will cost 0,05 euro. This means that 1 GB of data would amount to 47,50 euros, almost 5 times the 9,90 euros package which offers 50 GB. We can therefore only recommend that all subscribers of this package completely deactivate the data. mobiles. Background downloads to show email notifications, Facebook, etc. most likely exceed these 50 MB per month.

Freebox subscribers can get this package for free. As the main package, it will be reserved for those who do not intend to use the Internet. However, as a second package, this can be useful for SFR or Bouygues subscribers who have a dual-SIM smartphone. Thus, in the event of an emergency in the mountains or in a place with limited coverage, it will be possible to switch to this second SIM card to make calls or send SMS via the Free or Orange networks.

A lack of innovation while waiting for 5G

The biggest criticism that can be made to Free is its relative lack of innovation in mobile technologies. Thus, it is the only operator not to support VoWiFi and VoLTE. Even La Poste and Prixtel, which are only MVNOs (virtual operators who do not have their own network), support these technologies. As a reminder, VoWiFi allows calls to be made via the WiFi network if the smartphone is connected. This improves coverage inside buildings. Of course, Free relies on the FemToCell technology that it has integrated into the Freebox Revolution and Mini 4K, but you have to be a Freebox subscriber to take advantage of it. VoLTE technology allows voice calls to be made over 4G. This allows you to continue to consult the Internet or receive e-mails while maintaining your telephone conversation. Free Mobile had announced it, but this service was never activated. It seems clear that Free is preparing for the arrival of 5G, even if it means abandoning the deployment of 3G and 4G services. It would seem that Free Mobile plans to make 4G and 5G cohabit on the same frequency zone of 700 MHz. Moreover, the operator has already begun to install specialized AirScale base stations as well as new MDEA converters. This would allow it to deploy a 5G network quickly and at low cost, even if it will not have the full speed offered by this new technology.