iPhone: here's why Apple refuses to change swollen batteries in its Stores, in video

Do you want to replace an iPhone battery that has swollen a little? The Apple Stores will refuse to do this on the spot – you will be offered instead to send the device to a specialized centre. Replacing this kind of damaged battery is indeed extremely dangerous as this video shows. 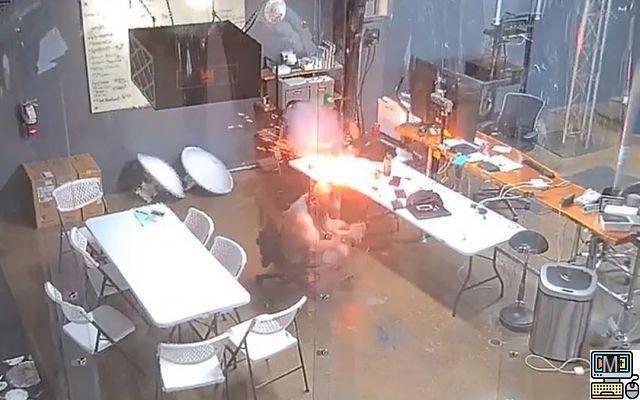 Changing the battery of an iPhone is nowadays an almost trivial operation: all you have to do is go to an Apple Store, or to the “corner” repairer (no offense to the firm) and the battery can generally be replaced during the day or even in a few hours. However, there is a case in which the repair may take much longer: this case is when the battery of your smartphone shows signs of swelling.

When your iPhone goes boom...

Apple Store employees do not have the right to touch this type of damaged device. The risk of accidentally puncturing these batteries and causing a fire during disassembly is just too great, as shown in a Redditor's video tryagainin47seconds. This shows images from CCTV cameras at his workplace.

tryagainin47seconds had just picked up an iPhone 5s whose battery had just been changed: “the battery had been replaced by a colleague who originally owned the smartphone and he thinks it was due to faulty equipment. The battery started to swell when I charged it and suddenly he tried to disassemble it to try to find out why”, explains the redditor.

During the disassembly the device caught fire without warning. We then see him throw the device on the ground and try to extinguish the flames by stepping on it with his shoes. In the Reddit thread, netizens point out that while it seems to have worked in this case, you shouldn't try to smother a lithium fire with your shoes.

An impressive fire, but we shouldn't condemn third-party repairs too quickly

This can reach 2000°C and it is best to cover it with sand (water is also not recommended because lithium reacts very violently with it). Others suggest that the unfortunate repairman get his lungs checked – the smoke from the batteries is particularly toxic. We therefore understand why Apple Stores prefer to put these devices in fireproof packages before sending them to better equipped centers.

However, there are also comments that recommend – no doubt rightly so – to make allowances. The question of the right to repair electronic devices is indeed a very sensitive subject in the United States. Apple is among the companies most vehemently opposed to third-party repairs. One of the firm's arguments is precisely that self-repairs can pose a danger to the user. Something that this video seems to show – while similar cases are probably not that numerous.

Replacement phone I got exploded in my face the other day. Luckily my work got it on video. from r/Wellthatsucks

Audio Video iPhone: here's why Apple refuses to change swollen batteries in its Stores, in video
iPhone X: how to close an application? ❯

add a comment of iPhone: here's why Apple refuses to change swollen batteries in its Stores, in video