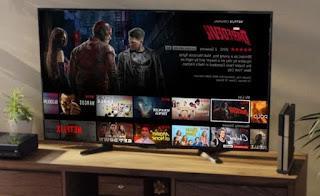 If Netflix is ​​a website, how can I watch movies on TV?
This is a fairly frequent question from people accustomed to Sky and not experts in computers and applications, but it opens up to a very interesting discussion for everyone.
The fact is that Netflix is ​​today the most convenient and comfortable way to watch new and old movies and series, not only because it is cheap, not only because a single subscription can be divided between several people (which Sky does not allow), but also for the exceptional quality of its site and its apps, easy to navigate, with an immediate streaming and without any waiting, able to recommend the user the films to watch that they should like and with the possibility of keeping the videos also for the offline viewing (to download from Netflix)
Having a Netflix subscription is therefore a must for anyone with an internet connection at home.

The only question is to find a way to watch Netflix movies on your home TV, quickly, easily, comfortably, without complications, without making special configurations.
In this article, then, let's see all the ways to watch Netflix on TV that meet these requirements, so that you can enjoy entertainment whenever you want even from the comfort of your sofa without any need to turn on a computer and wherever we are, not necessarily at home.

1) chromecast
You can watch Netflix on TV using a computer and a device Google Chromecast
The Chromecast can be purchased on the Google website and is a key with an HDMI socket that works as a wifi receiver for video transmissions from a computer or smartphone.
In practice, you open the Netflix site on the Chrome browser of the PC, press on the menu at the top right, on the three dots, and then on Cast.
NetFlix will appear on the HDMI channel of the TV to which the Chromecast is connected and just choose the movie and start playback from the PC to be able to see it.
The vision can also be remotely controlled using an Android smartphone in which the Google Home app is present, which is the one to manage the Chromecast.
You can therefore also cast on Chromecast from your phone, Android or iPhone, or from a tablet.
Please note that the Chromecast Ultra supports 4K streaming.

2) Yes, it can add Netflix to your TV with the Amazon Fire TV Stick
Amazon's Fire Stick, which costs around 50 Euros, is an HDMI stick to be connected to the TV which, unlike the Chromecast, works independently and does not need to be connected to a computer.
Just use the Fire TV remote control to navigate the interface, launch Netflix, browse movies, watch previews, trailers, TV series episodes, all from the comfort of the sofa.
The advantage of an automatic and simple key like the Fire TV is also that of being able to carry it around wherever you want and use it to watch Netflix from any TV, even in a hotel or at other friends' homes.

3) Netflix on Smart TV
Clearly Netflix is ​​now integrated into all new Smart TVs, that is, those that have the ability to connect to the internet and install applications.
Almost every new TV from Samsung, LG, Sony, Sharp, Panasonic and the most well-known brands produce Smart TVs that already have Netflix installed and that do not require any other connections or devices.
In another article, the best Smart TVs to buy, even with ultra-high resolution 4K streaming.

5) Netflix on TV Box
The TV Boxes are like mini computers with an Android operating system that allow you to use the TV with all the applications and games that are available for smartphones and tablets.
Among the apps, of course, it is also possible to install Netflix so you can watch movies on TV without bothering from the sofa.
TV Boxes are like multimedia stations, more complex than FireTV and Chromecast, which allow you to access all kinds of content on the big TV screen.
We have seen in another article what the best android tv boxes that you can buy today.

6) Netflix on the game console
Who has one PlayStation 3, PlayStation 4, Xbox 360, Xbox One, Wii U and Wii (for the Nintendo Switch yet not at this time), he can simply install the Netflix application to access the catalog and watch the movies on the TV.

7) Other devices to connect to the TV to watch Netflix are Timvision, Vodafone TV, Apple TV, Roku, Mini PC and some modern Blu-ray players.