See and write Emoji on Windows PC and Mac 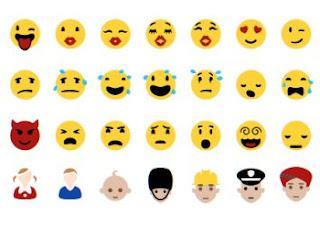 Emoji are the new generation of emoticons and can be used in messages or on sites like Facebook to express a certain mood or action with a simple symbol drawn in a colorful and fun way. Emojis can be read and seen on any device, be it a Windows PC, a Mac, an Android smartphone or an iPhone, only they are a bit hidden and you have to activate them manually.
In another article we saw how Enable Emoji Smilies on Android, iPhone and iPad.
Now let's see instead how to use the Emoji keyboard on a Windows PC and Mac to see and write messages on sites like Facebook, Twitter, Tumblr or any other site or app that supports them.


Before activating them, let's see if we can immediately read them on the computer by going to the getemoji.com site or the istartedsomething site
If you see all the squares, then your computer doesn't have emoji support.
The site Emojipedia it also has a section of the most recent emojis released.

On PCs Windows 10 they are natively supported so they should be visible and nothing needs to be done.
Your pc Windows 7 (and on Windows 10 and 8 if you don't see them) instead a Segoe font update, for Windows 7 32 Bit and for Windows 7 64 bit.
If you see them in black and white it means that the browser does not support them.
Try opening the same page with Firefox or Internet Explorer and you should see all the colored emojis.

To write the Emoji, for example on Twitter or even on Facebook and on programs like Word, if you have Windows 8 and Windows 10, just open the on-screen keyboard. Then right-click on the taskbar at the bottom, select Toolbars with the pointer and click on Virtual keyboard.
Then open the virtual keyboard pressing the button visible at the bottom right of Windows 10 and pressing the emoticon key located next to CTRL to open the Emoji keyboard with all the various Emoji symbols grouped into categories.
Note, for example, that Emojis also work on documents Word and Powerpoint, both on Microsoft Office and on LibreOffice or any other writing program, choosing the Segoe UI Semibold. In Microsoft Word, press Insert on the top menu and then the symbols key on the top right.

In Windows 10 you can invoke the emoji keyboard directly, without going through the virtual keyboard, with the combination of keys Windows-point .

To write the Emoji on Chrome you can install an extension like Emoji Keyboard, which allows you to call up a keyboard of emoticons and smileys to insert them on any website.
To write Emoji on websites you can also install the extension Emoji Keyboard for Chrome which brings up all the smileys from a button at the top right to insert them in any text field.

To write the Emoji in Windows 7 or other special facets that are not contained in the virtual keyboard of Windows 10, all you can do is copy and paste. Then open the getemoji.com page, select with the mouse the symbol you want to use, press CTRL-C together and then, on Facebook or Twitter, open a text box to write the status or a comment and press CTRL-V to display the emoji.

Alternatively it is also possible find other emojis online for websites, Messenger, Whatsapp and web chat

Your mac, to write Emoji just click on a text box to write and then press the Control-Command-Space keys together.

In addition to the GetEmoji site reported above, there are also other sites from which to copy the various symbols to use them on Twitter, Facebook or other applications.
For example, the site iemoji.com describes itself as the Emoji keyboard for computer and allows you to write by clicking on the various drawings which can then be copied and pasted wherever you want. From here you can choose different Emoji graphic themes, including that of Android, iOS, Samsung and LG, including the new Emoji (which, as mentioned above, I was unable to use).

See and write Emoji on Windows PC and Mac

Audio Video See and write Emoji on Windows PC and Mac
How to find hidden files in Windows 10, 8 and 7 ❯