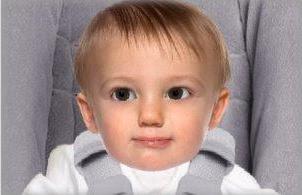 Among the funniest programs that shape, modify, transform and retouch photos we have already seen how to age the face and change gender and age through some special applications.

In this article, however, we find out how to see the face of the child who can be born or who will be born to two possible parents, with a forecasting model that mixes the faces of the father and the mother, creating the image of what the newborn child will be like.
Even though these are fun applications that should not be taken seriously, it is still a nice experiment, especially for those who are waiting.

From our website BabyMaker Oddcast there was the Babymaker3000, the best baby simulation you could have; unfortunately today it no longer works.
It was only necessary to upload any two photographs, that of the possible father and that of the possible mother and have fun seeing that son it can arise from this union.
Not only will you see the virtual image of the child but it will move across the screen 3d printing, three dimensions, creating a very beautiful and vivid effect.
The initiative of this web application is the work of Wolksvagen America, for advertising purposes.

From our website Morphthing.com instead there is an app that allows you to see a mix between two faces in the picture and also to simulate the hypothetical child that would be born between two people.
Then try to use two VIP photos or two of us uploaded from the computer and press the Morph baby button to see the baby that will be.

The only working app, the less visual effect it is MakeMebabies, an app to imagine what a son or daughter would be like as a child.
Here too you have to upload the two photographs, that of the possible father and that of the mother, to see how the baby will be born.
The difference is that in this case you get a static image that has less visual impact, but remains better than nothing.

Your Android smartphone you can use the app Baby maker (closed) with which it is possible to see how the child who can be born from a hypothetical pair of parents made up of a real man and woman is.
Just upload a photo of him and one of her to see what the baby looks like.
Upload the photos then, once the result is obtained, you can give the baby a name and make some final touches to the image.

For iPhone, you can try the application instead "Face of the future child", also automatic and that generates the photo of the newborn child after uploading the photos of the faces of the two parents.

Obviously it becomes a very fun game to try to see what a child can be born between different couples, between friends and putting a celebrity or a vip as one of the two parents ... some good ones will come out!

Other applications allow you to apply a morphing effect to combine the faces of two people and create a new face.

Audio Video See how a child (child) will look like starting from two photos of the parents (possible)
Powerpoint online to create, view and share presentations and slides ❯