See the Android screen on the PC and use it 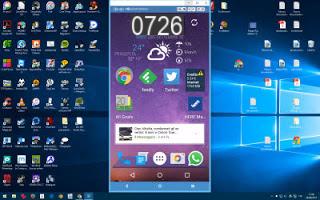 If you want see the screen of the Android smartphone on the PC there are several applications including, the best, is Airdroid (by downloading the PC program), with the AirMirroring function. AirDroid is basically a file transfer app which also has a wireless wifi screen mirroring function. The function that allows you to see the phone screen on the PC allows you to manage calls and message notifications, but it is complete only in the pro version, where it is also possible to open the camera remotely, activate / deactivate the integrated functions and much more .
If, on the other hand, you want a completely free solution, there is another application that installs on your computer (Windows, Linux or Mac) like application for Chrome. The only thing you need is a USB cable to connect the PC to the phone (the one used to recharge the phone is fine), because it does not work in wifi.

First of all, therefore, the app must be downloaded and installed on the Android smartphone Vysor.
At this point, open Google Chrome on the PC and install the application Vysor.
Open the App list in Chrome and start Vysor. Press the Find Devices button and select your phone. If nothing is found, as it says on the first page of the application, you must first install the ADB drivers on Windows.
On Android, the option must be activated USB debugging from the developer menu. To bring up the developer menu, go to Settings> About phone, scroll down until you find build number and tap on them for several consecutive times until the Developer Options menu message appears. Then go to Settings -> Developer options and enable USB debugging. Then connect the phone to the computer via the USB cable.
Once the phone is found, just click on its name to create the link and see the smartphone screen on the PC.
A pop-up should appear on the phone to confirm computer access. If you don't see it, try unplugging and reattaching the cable again and if a notification about the media transfer link appears, tap it and turn off the options. From the Vysor home screen it is possible to remove or use the auto connect option which shows the phone screen as soon as it is connected to the computer.
There really is nothing else to do and the phone can be used from the PC desktop in real time, using the mouse and keyboard to open and interact with applications. The USB cable ensures a stable and fast connection, without any delays that might occur using a wifi app like Airdroid. You can then write SMS, write messages on Whatsapp, use Facebook from the app, open photos and everything you want.

A different way to make this type of connection is to see on your PC screen what you see on your phone screen. In this case you cannot use the phone from the PC, but you will see what appears on the Android phone, in real time, on the desktop of the computer (Windows, Mac or Linux). The USB cable e is not required for this type of connection all that is needed is that the phone and computer are connected to the same Wifi network.
This time you have to download a new app on your smartphone and, precisely, ApowerMirror. The great thing about ApowerMirror is that it not only shows the phone screen on the PC, but also allows you to take screenshots and recordings of what you see. Most of the functions are, however, only available in the premium version of ApowerMirror.

LetsView is a free Android screen mirroring tool to PC that supports high resolution and also works to view iPhone screen on PC. This program also has built-in support for Miracast and AirPlay. During mirroring, you can write on the screen in real time, take screenshots and record the screen in high quality MP4 video. To use LetsView, you must first install the LetsView client on Android and then the program on a PC and make sure that both devices are connected to the same WIFI network. The desktop client also generates a QR code and a PIN code, so you can scan the QR code or enter the PIN in the LetsView app on your phone to connect. Once the devices are connected, the smartphone screen will be displayed in real time in a Windows 10 window.

Other ways to see Android screen on PC

Another way to see Android screen on PC, without using applications, in Windows 10, is to search for the application Connect from the Start menu and open it. Then open the Android phone that you want to transmit to the PC, pull down the notification bar to bring up the control buttons and press up Broadcast. Go to Other settings, touch the three dots at the top and activate the option "Enable Wireless DisplayThe name of the PC should appear underneath, which you just need to tap to connect.

The paid app that advertises itself as the best for wifi smartphone screen mirroring is Screen Stream Mirroring, which you can try for free.

See the Android screen on the PC and use it