See the disk space occupied by large files and folders 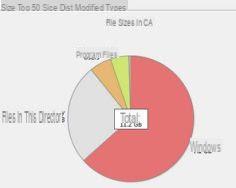 When you buy a PC, inside there is the hard disk, the hard disk on which data and files are written. In recent years, these hard drives have become increasingly larger in terms of Gigabytes and more and more data enters them. The fact remains that both those who own an older PC and those who, despite having large and modern hard drives, are often in front of the computer, installing and downloading large files such as films or video games or programs and still fills the available space.

To check hard disk usage, you can use the simple default Windows tool when you right-click from your local drive but that information shows almost useless data. What you really need is a tool that delivers evidence of the largest files and their position in the way that, if they are useless or not used, they will be deleted. The problem is not trivial because Windows is a system made up of many folders and very often some large files are placed in paths and subfolders that a normal person would never look at.

In another post we saw how free up disk space automatically, but we must specify that many large files are not detected by these software and you have to find and delete them manually.
So let's see i best software that check disk space, both the used and the unused one, giving a graphic evidence of the largest folders, the heaviest files and their paths, so that you can see them immediately and, if necessary, delete them.

First of all, let's see how Windows 10, by opening Settings> System> Storage, you can see the disk space occupied by the different file categories. By pressing on the App you can discover the largest programs while pressing on Other you can see the folders with the largest size and with more files inside. The graphics are good, but not complete.

1) SpaceSniffer a small portable tool, which does not need installation, which you just have to start to make it scan all the files on your hard drive. It highlights the largest folders and subfolders and, by double clicking on one of them, offers all the details on the space used. There are also options to show the undetectable space (unknown space) and the empty space (free space). The practical utility of the tool comes from its neat graphics that make it easy to find the largest files at a glance.

2) Spyglass it is one of the best tools to graphically check how disk space is used, what are the largest files and also to identify duplicate files so that they can be deleted.

3) Ablessoft FolderVisualizer instead it is a richer and bigger program with which to view the space occupied by each folder and directory on the PC. A disk scan analyzes space by displaying a complete list of files and folders to identify which data can be removed to free up space. The information is displayed in a variety of formats including pie charts. You can see the first 100 largest files and there are graphical and statistical representations very useful for a complete analysis. It is able to analyze both internal and external hard drives, including USB sticks.

4) TreeSize it works more thoroughly and has completely different graphics. The pie chart is very detailed and appears to dissect the real hard drive. This highlights the largest folders and subfolders to find which files have the largest size. The aim is always to see how the hard drive is used and how much space is available to upload new files. Among the very numerous statistical information, there is also that which gives information on disk clusters, their size and their implication in the space used or not of the hard drive. Other functions then allow you to search with different filters, highlighting the largest files, those with the longest paths or names, folders with more files inside, and much more.

5) Disk Sorter allows you to view files and folders graphically and see the list of all elements classified by various categories. Filters make it easy to view only certain file types, such as only those that are between 100MB and 1GB in size, or .exe files or those that have not been used for two or more years.

6) JDiskReport is a software designed to see visual reports about the use of your hard disk and on individual folders and is very useful for checking if there are very large files that take up space.

7) Xinorbis it is also a very good program that offers graphs to check disk usage and space used by individual files and folders.

8) TreeSize is a simple program that allows you to graphically view the space occupied by each folder.

9) RidNacs is a tool that adds the disk space display item to the right-click options menu. The graphic indication of the space occupied by each single file is very useful to find out which are the largest files.

10 ) HD Analyzer by TweakNow is an excellent program to see the space occupied on the hard disk and analyze it graphically. You can group files by type and see, for example, how much space your pictures, videos, music and so on take up.

11 ) WinDirStat is a very convenient tool to see the space occupied by files and folders and analyze their distribution in a graphical tree mode.

12 ) WizTree is a graphical viewer of the space occupied on the disk (or NTFS partitions) by files and folders on a Windows PC and is perfect for immediately recognizing which are the largest.

13) Other Windows programs and tools for find out the space occupied on the hard disk and search for recent and large files, I'm on another page.

Finally I remember that, for a good maintenance of the hard disk it is very useful to use the defragmentation tool, different and more efficient than that provided by Windows.

In another article we saw the best tools for checking the performance and performance of a hard disk.

See the disk space occupied by large files and folders

Audio Video See the disk space occupied by large files and folders
Create websites for mobiles and mobile phones, the mobile version of a website or blog ❯