See the list of drivers installed on the PC 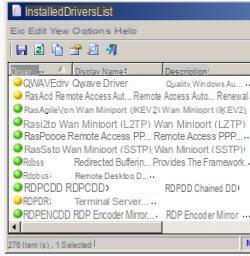 When something on your computer doesn't work, by talking to tech experts or looking for discussions in forums, sooner or later you will read about updating your drivers.
But what are the drivers? Do they really need to be updated and how do you see which ones are on your PC?
In very simple terms, drivers are nothing more than computer programs that allow Windows and other applications to interact with a hardware device.
The computer does not know by itself how to use all the functions of the video card or printer so it needs a driver to do so.
Like any program, even some drivers come out, from time to time, new versions and can be updated.

Drivers are not something to worry about if everything works fine, however, unless you want to play new games that may require updating the graphics card driver.
In the event, however, in which it should serve know the complete list of your computer's installed drivers to solve a problem or to know which version is there so that you can compare it with the latest available, let's see how to get it in an easy, fast and complete way

On Windows there is a command to execute in the command prompt (to be found in the Start menu -> Programs or, in Windows 8, to be launched by pressing the right button on the flag at the bottom left):
driverquery
To get more information about the drivers installed on the PC, you can run the command
driverquery / V

Since this way of viewing the list is inconvenient, there is a much more practical little program called InstalledDriversList, developed by Nirsoft, free, with no quirks inside and no installation required.
Once downloaded, extract the InstalledDriversList file from the zip file to a folder and run it to see the list of drivers in a legible and orderly way.
By clicking on one of the drivers you can view more information including the version, date and location where it is stored.
Green icons mean Windows is using that driver, yellow means it's installed but not activated, red icon means there's a problem with that driver.

To conclude, I would like to advise against (even if they have been reported in another article on how to update drivers automatically) the use of programs for updating drivers and look for them, in case it really needs it, on the site of the hardware device manufacturer. that doesn't work.
Keep in mind that, generally, the only drivers that may require updates may be the video card, the printer, the sound card.

See the list of drivers installed on the PC