See which CPU we have in the PC (model and speed) 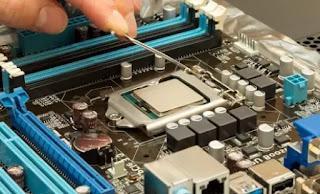 Each computer contains at least one processor, also known as a CPU or central processing unit. The CPU is undoubtedly the most important component of any processing device, be it a computer or a smartphone, the brain of operations where the necessary calculations are performed to execute the programs stored in the system's memory. It is a small computer chip that sits on the main board (motherboard) of a computer, separate from memory, which is where information is stored, and separate from the graphics card that handles all rendering of video and 3D graphics. on the monitor.
Know what CPU we have inside our computer it is important not only to know how fast it is in executing calculations and programs, but also to see how many cores it has and what generation it is in order to find out which software and hardware parts are compatible with that CPU.


What does a CPU do?

The computer processor receives instructions from a program or application and performs a calculation. This process can be divided into three main stages: recovery, decryption and execution. The CPU fetches the instruction from RAM, decodes what actually is an instruction, and then performs the numerical calculations to make that program work. In modern systems, the CPU does not do everything but governs the other parts of the computer so that they can do their job. Thinking about a game, he can then tell the graphics card to show that explosion when the use of a bomb is clicked or, thinking about writing to a file, take the contents of the Office document from local memory.

The speed of a CPU

La processor speed, called the speed of clock, is the number with which the CPUs are tagged and is expressed in "gigahertz" (GHz). This number of GHz indicates how many instructions a CPU can handle per second or, in other words, how fast applications run. While it is an important value, clock speed is not the only parameter to consider when measuring performance. This is a key value when comparing CPUs from the same product family or generation. When all else is the same, a higher clock speed means a faster processor, but, for example, a 3GHz processor from 2010 will never be faster than a 2 GHz processor from 2018.
Regarding the CPU cores, just know that the more cores and threads there are, the more the CPU can do more things at the same time. We have seen in another article what speed a multi-core processor has.

Know which CPU is mounted inside the PC and its speed

A system information utility is not required for know what CPU we have inside the PC, because Windows shows it in several places.
In Windows 10, you can open the Settings app, go to the section System and then scroll down the left column until you click Informazioni su. Under "Device Specifications", you can read the name of the computer processor (which will always be Intel or AMD), the model (for example i3, i5 or i7), the generation (which is 8 if a number like 8400 is written ) and its speed expressed in GHz.
In Windows 7 and also in Windows 10 it's possible see the CPU also in the task manager, by pressing the CTRL-Shift-ESC keys together. From the Task Manager window, click on the tab Performances (if you do not see it press on More details first) Other and select CPU to see the name and speed of the processor and also its use in real time. This window also shows the number of CPU cores, the number of active processes and the instructions it is processing (Thread) for the various processes.
Another place where your computer's CPU model is written is in system properties. In both Windows 7 and Windows 10, open the Control Panel and go to System and Security, then click System. In the center of the page you will find the processor name, model, make and speed. To quickly open this window, you can press the Windows-Pause keys together.

On a PC that does not start Windows it is still possible to know what CPU is inside the PC by going to the BIOS or UEFI firmware settings screen of the computer (see here how to enter the BIOS of the PC).

More information on the CPU

We have written all the technical details on the CPUs in the article on which to buy PC processor or CPU, with insights on the differences between Intel and AMD processors and on Intel i3, i5 and i7 processors.
One factor that may be important to check while using the CPU is that of the temperature, which should never be too high. We then explained how to cool the CPU if the temperature is high and too hot.

See which CPU we have in the PC (model and speed)