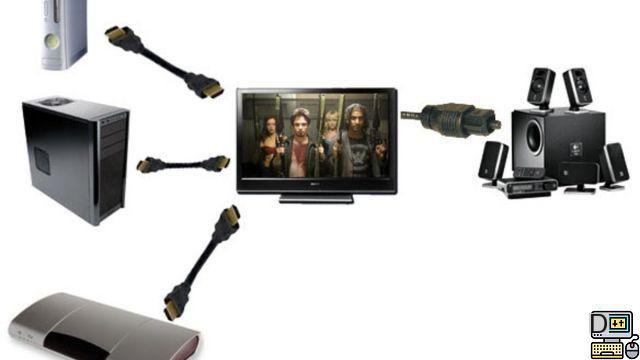 Better enjoy your audio installation without buying additional equipment, it's possible! Here are some sound advice based on experience...

For this news, I'm going to walk on Tristan's flowerbeds and venture into the field of sound. Here is the summary of the situation. At my home, I have the following equipment: Xbox 360 console, New HDTV decoder, Sony KDL-40D3000 TV, computer with HDMI graphics card and Creative XFi PCi-E sound card and Logitech Z-5.1 5400 speaker kit. Until now, I had connected my installation like this:

Everything was going well until a conversation one evening, with a friend of my friend (whom I will call Monsieur Braman to preserve his anonymity), who insisted that my TV could only offer a 2.0 signal via its optical output. As a result, I couldn't actually enjoy true 5.1 sound on my speaker kit. My blood boiled and I rushed to my installation to check. DVD of Matrix and Star Wars (in remastered version 5.1) in hand, I launched into the tests. Unfortunately, he was partly right!

Here's what happens. Xbox 360 and PC devices (I deliberately put the TV decoder aside) do send 5.1 sound to the TV. The TV picks up the 5.1 signal, happily swallows all that and brings out a 2.0 signal to the speaker kit. The kit, via its decoder, somehow interprets the signal and tries to bring it out as cleanly as possible on the five speakers in order to reproduce a surround effect.

The result is obvious with the THX audio test, available in the language selection menu of Star Wars DVDs. This test launches a sound on each speaker separately. Thus, you can listen in real time if each audio track is well reproduced separately. On the two front speakers and the center (for voices), no problem. It is spoiled, however, at the rear. Instead of having the sound on one, then on the other, they worked together with the sound louder on the right speaker, and less loud on the left, then the reverse. Finally, the subwoofer did not respond altogether. In practice, in the Matrix scene where Neo is shot by an agent, all in Bullet time, this results in a messy sound where you can't really distinguish the left from the right when the bullets fly on the sides of our ears.

She is straightforward. You have to take the TV out of the audio circuit. In other words, directly connect as many peripherals as possible to the speaker decoder. On the PC, I connected the sound card directly via a Toslink optical cable to the speaker kit. And there, miracle: it works! The tracks are well separated and the rendering of the film's audio track is clearly superior. Be careful to use a software DVD player capable of decoding the sound in 5.1.

What to do with Xbox 360? This element remains a problem in my installation since it only has an HDMI output and no individual audio output. Here, the solution would be to buy a high-end (expensive) amp. These amps can receive an audio and video signal via an HDMI input (the entry-level models are satisfied with video via this interface, which would not work here), recover the audio signal, send it to the speakers and redirect the video to the broadcaster. Some can even have two HDMI outputs, which would perfect my installation, and add that Full-HD video projector that I've been waiting for so long.

In the meantime, I keep the Xbox connected via HDMI to the TV and bring out the audio signal on the speakers for a 5.1-like rendering.

Ideally, the amp should take center stage in my setup. Here's what it would look like.

Ideal installation: the amplifier becomes the centerpiece for sound and image

Note, the choice of the amplifier with HDMI input (audio and video) is also imperative for purists who want to listen to Dolby Digital TrueHD and DTS-HD tracks. These new state-of-the-art standards only pass through the HDMI socket and not through Toslink or Coaxial cables.