How to remove spam from WhatsApp

Report and block a user 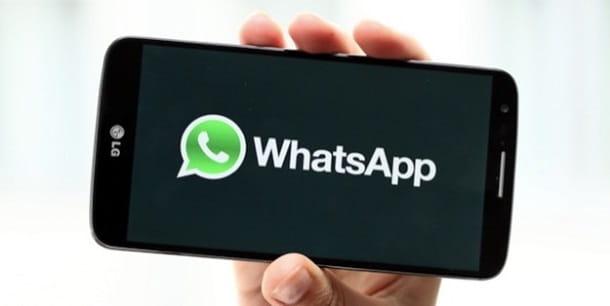 If you are constantly receiving messages on WhatsApp from unknown users who annoy you, what I recommend is to make one signal. This operation involves the immediate blocking of the user, so that you no longer receive any of his messages, and the reporting to WhatsApp, which is useful so that measures can be taken to suspend the user's account, in case of violation of the terms. of using this messaging service.

As an alternative to this method, for block spam you receive on WhatsApp, you can simply block the user: operation similar to that indicated in the previous lines, but which does not make any report to WhatsApp.

In the next paragraphs, I will explain how to report or just block a user, both on Android and iOS smartphones, and via WhatsApp Web or desktop applications for Windows and macOS. You just have to find the most comfortable solution for you and adopt it.

One smartphone is possiedi Android, launch the app WhatsApp through its icon that you find on the home screen or in the drawer (the screen with the list of all the apps installed on the device) and select the tab Chat. Now locate the conversation with the user who annoys you and tap on it.

Within the conversation, press the icon ⋮, located at the top right, and select the items Other > Report from the menu that is shown to you. After performing this operation, you will see a box that will ask you if you want to confirm the user's report to WhatsApp: before confirming this request, make sure there is a check mark in the box next to the wording Block the contact and delete the messages from this chat. 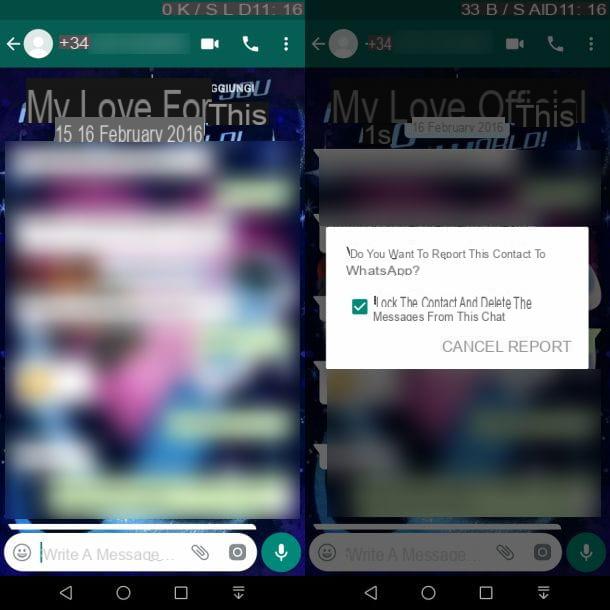 At this point, you just have to tap on the voice Report, to send the report to WhatsApp and block the user. Doing so will also delete the entire conversation.

As an alternative to the above method, you can separately report or block a user via the function Block of WhatsApp. To do this, open the conversation of the user who annoys you and press the icon ⋮, located at the top right.

Now, in the menu that is shown to you, select the items Other > Block. You will be prompted to choose between two options: Block, to block the user without reporting it, or Report and Block, to block it, also sending a report to WhatsApp. 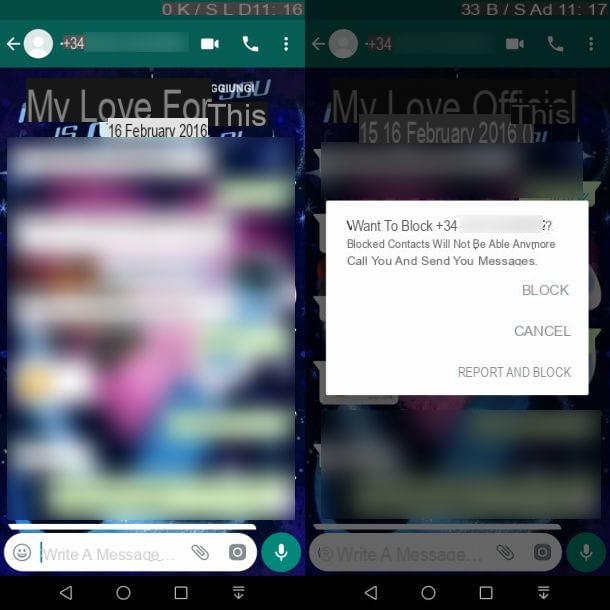 You can also access the items related to reporting and blocking the user through the contact information tab. To do this, you need to enter the conversation and press on telephone number or on user's name, located at the top. In the tab that is shown to you, scroll through the entries to find the ones named Block e Report contact. 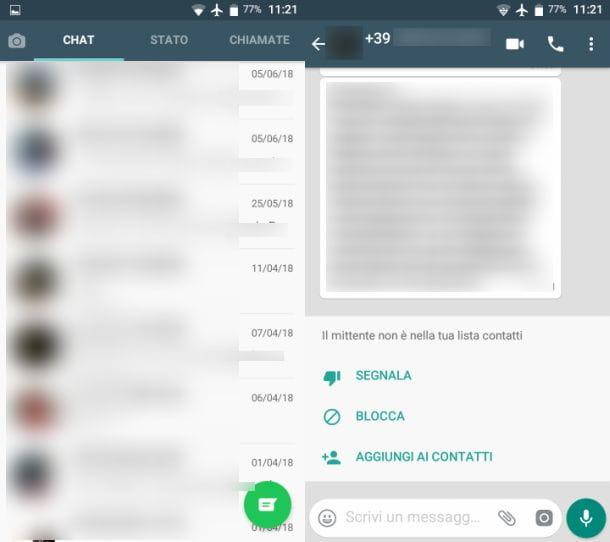 Su iPhone, you can report a user in an equally simple way compared to that seen in the previous paragraphs dedicated to Android. First, launch the WhatsApp, by tapping on its icon that you find on the home screen.

Once the application is started, press the icon Chat, which you find in the bar below, and locate the conversation related to the user that annoys you. After pressing on it, tap on name of the person or on number that you find in the section above, to access the contact information. 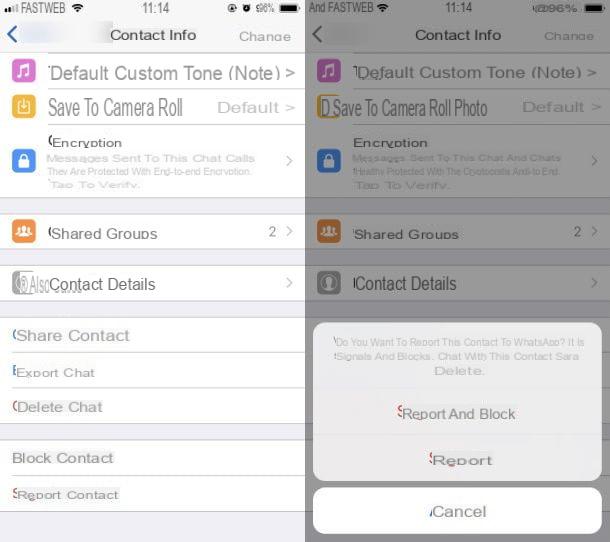 In the tab that is shown to you, scroll through the different items until you find the one named Report contact. Now, you just have to tap on this item to view a new screen: presses on the wording Report and block, to send the report and block the contact, so as not to receive any more messages from him, with the consequent elimination of the entire conversation; alternatively, tap on the item Report, to make the user report only.

The exact same procedure can be performed by tapping on the wording Block, within the contact information tab. You will be offered the options Report and block, to block the user and report him, or Block, to simply block it. 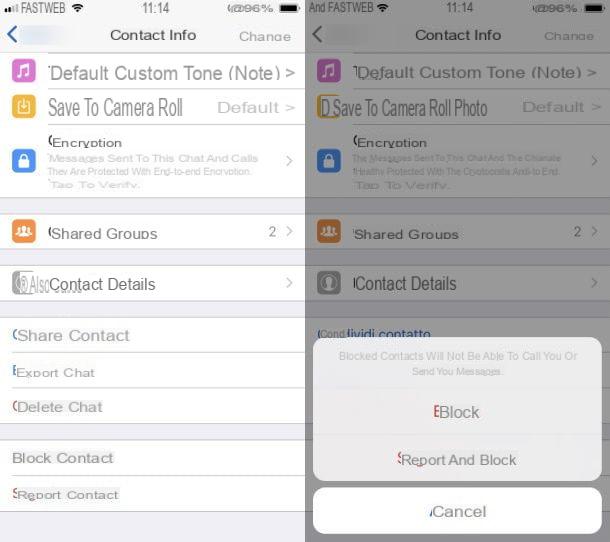 As an alternative to the methods above, you can block or report a user directly from the conversation screen. When you first receive messages from a user who is not in your contact list, you will be offered some options to limit their interaction with you. 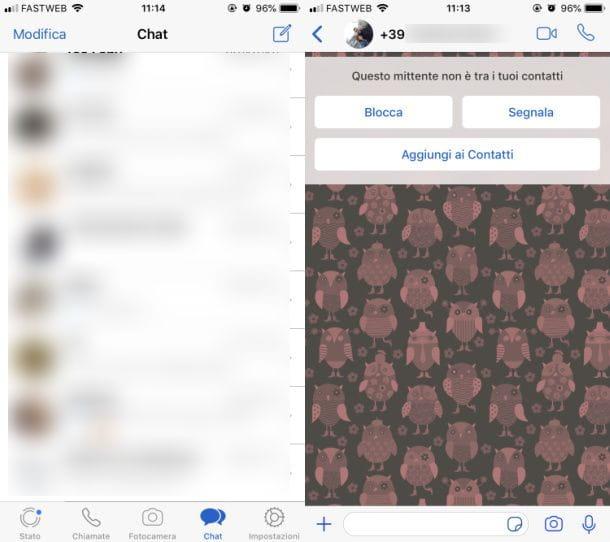 Pigging on your pulse Block, as I have already explained to you, you will block the user, so as not to receive any more messages from him; by pressing the key instead Report the blocking and reporting of the user to WhatsApp will be applied. 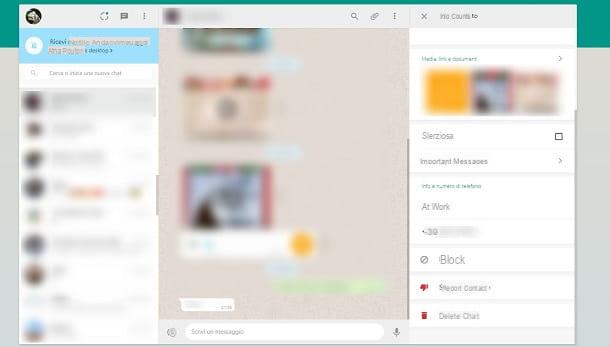 It is also possible to report or block a user via theWhatsApp desktop application for Windows e MacOS or from Web WhatsApp (the online version of the service accessible via browser). For Windows, Whatsapp is available both on the Microsoft Store and via executable; for MacOS it can be downloaded as a dmg package from the official website or as an app from the Mac App Store. The procedure to follow is identical on all three usable solutions.

Then start the WhatsApp application through its icon on the desktop or in the Launchpad, while if you use WhatsApp Web reach its official website. Now, after logging into WhatsApp via the QR code (I told you in detail about the procedure in this guide of mine), click on the conversation related to the user who is bothering you.

Once this is done, click on the icon ⋮ di Web WhatsApp (In Windows has the symbol [...], while on MacOS has the ▼ symbol) located at the top left, and selects the item Contact info, in the context menu. In the screen that is shown to you, scroll through the different items and press on the one named Report contact.

At this point, in the box you see, make sure the box is active Block the contact and delete the messages from this chat and click sul pulsating Report. If you just want to block it, without reporting to WhatsApp, press the button Block that you find inside the section Contact info.


Report and block a group 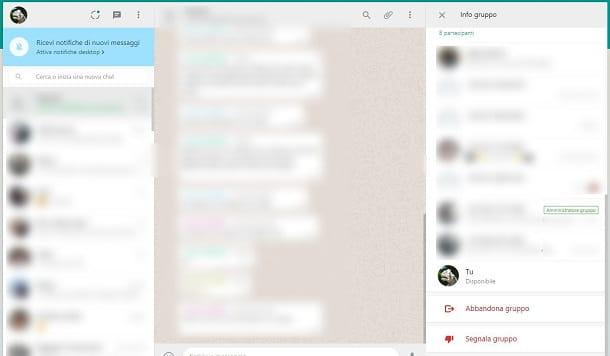 In case you get added in a group on WhatsApp without your knowledge, if you receive spam messages, you can block and report the group. Although the simplest operation would be to leave the group, it is not an operation that can guarantee you will not be added to a new one or the same at a later time.

In this regard, what I advise you to do is first block the group administrator. To do this, go to the conversation of the group you have been added to and tap theirs name, located at the top. In the tab that is shown to you, scroll the screen to locate the list of participating users.

At this point, locate the contact labeled as CEO and tap on it. You will be shown a screen for interacting with the user: then tap on the item Message (on Android) or on Send Message (on iOS). In the desktop version or on WhatsApp Web, simply click on the user who has the group administration to open the chat.

After following these steps, simply block or report the administrator not to be added to any group managed by him anymore. What I recommend is to read the previous chapter where I explain how to block a user on the different devices on which you have installed WhatsApp.

Now that you've locked out the group admin, you can simply leave the group (procedure I told you about in this guide of mine) or report it to WhatsApp. This last operation involves not only reporting the group, but also the possibility of leaving it and canceling the conversation.

If you want to know how to report a group, I advise you to perform exactly the same procedures that I indicated in the previous chapter, regarding the reporting of the single user. The difference is that, rather than the voice Report contact, you will find the one named Report group. Easy, right ?!

How to update WhatsApp for free

How to sync WhatsApp

How to change the status on WhatsApp

How to save your girlfriend on WhatsApp

How to understand if you have been blocked on WhatsApp

How to write strikethrough on WhatsApp

Add a comment from How to remove spam from WhatsApp