Metaverse: Mark Zuckerberg fantasized too much about Ready Player One 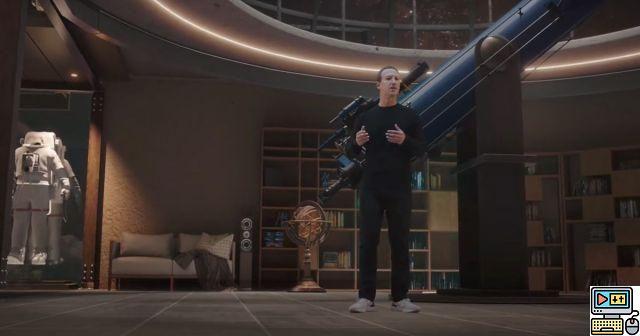 EDITORIAL // Mark Zuckerberg has finally lifted the veil on Meta, the company's new identity, and on the metaverse, this virtual universe fantasized by Facebook. And there is reason to doubt the utopia sold to us.


Coincidence of the calendar or not, Mark Zuckerberg put on the costume of Sam the fireman on Thursday, October 29, extinguishing the Spains Haugen fire for a few hours. The fiery Facebook boss unveiled the group's new physical and visual identity: Facebook is now called Meta, and its logo looks like an infinity symbol, in a 3D plan. A strategy that is reminiscent of that of Google with Alphabet. From now on, therefore, the company's services will be available under this model: Facebook by Meta, Instagram by Meta, WhatsApp by Meta, etc.


But the main thing is not there. The bulk of the Connect conference revolved around the metaverse (metaverse, in Spanish), a virtual universe that does not yet exist, but which is the new priority project for the company, which also plans to hire 10 people. to build it. Just that. And Zuckerberg staged himself for more than an hour to sell us a project that no one seems to understand.

The creation of needs

After trying to seduce tech journalists with big teasers, the stage on Thursday, October 29 was to test Facebook's power of seduction on the general public. This future depicted in video by Zuckerberg is obviously inspired by works of dystopian science fiction, where we attend a concert with our best friend (who seems to see us?), where we play basketball (with a ball that you can feel at your fingertips?), where you box and take punches against a giant robot (is it going to hurt?), and where you organize work meetings (is it what we are as involved in front of a virtual avatar as on Zoom?). The technical challenge seems immense.

The images are flashy, the universe is ideal, and the metaverse imagined by Facebook has something of the virtual reality depicted by Steven Spielberg's Ready Player One (and Ernest Cline's book). Everything is also very focused on the game, positive social relations, culture: nothing of what Facebook is today.

The person on the right is a hologram at a concert. Screenshot of live Facebook Connect. © Facebook

And this is precisely what he is accused of by whistleblowers and specialists in the matter. The platform would not do enough to fight against inappropriate behavior, the malaise of the youngest, and would even adopt opposite strategies aimed at creating more commitment, making more profits, by promoting indignation and hateful content.

Mark Zuckerberg also mentioned more "concrete" things, such as cryptocurrencies and NFTs, whose potential we feel in a virtual reality marketplace. These interactions make us think of what the game Fortnite is already doing, where we can attend live performances by artists. So why not imagine exhibitions of NFT art objects on the metaverse? The thing is likely to remain a niche (and rich?) delirium, but there is nothing aberrant about it.

Ultra-connection and the nightmare of immobility

Facebook is very realistic on the technical aspect of the thing: "We have to install hologram screens, projectors, batteries, radios, chips, cameras, speakers, sensors to map the world around you , and more, in glasses that are five millimeters thick,” says Zuckerberg. We can dream of stunning technological performance, but virtual/mixed/augmented reality has been disappointing since its launch, despite the marketing efforts of large companies. How many sensors, gadgets, devices of all kinds will it take to make all these theories real?


“The defining quality of the metaverse will be a sense of presence – like you're right there with another person or in another place,” the company explains. Feeling truly present with another person is the ultimate social tech dream.” A technological dream that is simply called reality, right? Who wants to go to a gig with a friend who's actually not really there to shove you into a pogo and share a pint of beer? Even looking forward years, if not decades, these metaverse “dreams” described by Zuckerberg seem more like a nightmare of absolute individualism.

He continues: “In this future, you will be able to teleport instantly in the form of a hologram to be at the office without moving, at a concert with friends, or in your parents' living room. If the pandemic has given us a taste of the perfect world according to the technocrats of Silicon Valley, where each individual can work from home and in addition bring in money on social networks, the biological reality is much more complex: l Being has a body that needs to be maintained through activity and social interactions. And you only have to look at the increase in stress and physical and mental disorders caused by the various confinements and the lack of real interactions to be convinced of this. Obviously, the idea of ​​the metaverse is probably not to lock people up 24 hours a day in a virtual universe, but isn't Facebook's goal to be used more and more?

Only a nerd dream?

Finally, we have to admit that the presentation made by Zuckerberg is a very long-term plan, a goal towards which to strive, an axis of evolution. But without overplaying the technological criticism, we are entitled to be extremely skeptical about this project. So what will the metaverse look like? The concept is still too vague to answer with certainty, and perhaps the doubts expressed in this article will finally be swept away in 10 years. However, it is highly unlikely that the metaverse will look like what Facebook showed on Thursday.

Another question: does the metaverse have the potential to really interest users? An already very tech-savvy public is watching all this with curiosity, but no one is really calling for our relationship to the world to be transformed. For the moment, augmented and virtual realities, except for a few flashes like Pokémon Go, are of no interest to anyone. The PSVR, announced as the evangelist of VR for the general public, is not even renewed for the PlayStation 5 for the time being. As for Apple, its AR device projects are constantly postponed. It remains to be seen whether the society of 2031 will express the desire for a new, extremely connected world.

add a comment of Metaverse: Mark Zuckerberg fantasized too much about Ready Player One