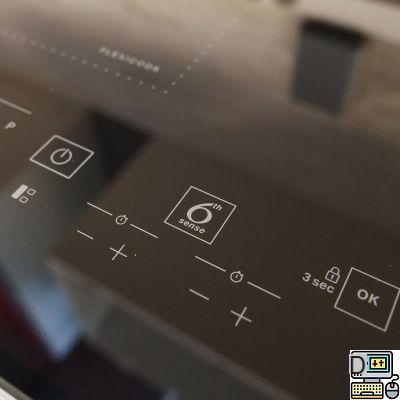 The Whirlpool WLB5860AL induction hob is less complete than the W Collection SMP 658 C NE IXL from the same manufacturer. Nevertheless, on paper, this model seems well equipped for a reasonable price.

This is not the first time that a Whirlpool induction hob has passed through our test laboratory. Less innovative than the W Collection SMP 658 C NE IXL and its cooking assistant, the WLB5860AL is a model with four cooking zones, each equipped with its own timer. It develops a maximum power of 7200 watts and has a combinable zone on its left (Flexicook technology). As often with Whirlpool, we can notice a 6th sense screen printing: on this model, this simply corresponds to a selection of four pre-programmed powers that are activated by touching the dedicated button. For 479 €, it seems to be a very suitable alternative. But there are sometimes far from the cut to the lips. Is this the case here?

It is not for its originality that we set our sights on the Whirlpool WLB5860AL hob. Its banal black coating accommodates classic white serigraphs. Here, there is no question of a magnetic wheel, like on the Samsung NZ63J9770EK, or a touch of color in the inscriptions, like what Rosières offers on the RTPSJ644MCWIFI. In order to help the user position the utensils, Whirlpool has chosen crosses, which are less practical than the circles of the Sauter SPI4360B, for example


However, this does not mean sobriety. The Whirlpool WLB5860AL's control panel is one of the most extensive we've come across so far, since each inductor has its own dedicated controls; the keys, cursors, buttons and displays are therefore multiplied, but you finally get used to this profusion quite quickly. In manual mode, this configuration is even very practical, since it is no longer necessary to press an inductor selection button before making adjustments. Everything is done directly.

On the other hand, and in a rather paradoxical way, if one wishes to use the preset powers, things get complicated. First, the zone must be active; after having posed a utensil, one modifies the power so that the inductor works. Then, you press the 6th sense button to scroll through the different possibilities offered (melt, keep warm, simmer, boil, etc.) represented by a series of slightly sibylline pictograms. Finally, we validate by touching the "ok" button. This succession of manipulations is not very instinctive and ultimately takes more time than manually setting the power level of the inductor.


You have to go through multiple steps to achieve this result.


Other small flaws tarnish the picture. First of all, the WLB5860AL hob only benefits from nine power levels. While this will most certainly suit a large majority of cooks in daily use, we would have appreciated a little more precision. In addition, this model is equipped with only two timers; Admittedly, it is quite rare to use more than one at a time, but abundance of goods does not harm and other models accommodate a timer per inductor. On this subject, there is no question of direct access here. Before you can adjust them, you must select the cooking zone to be timed by touching the "plus" or "minus" keys.


Finally, unlike other hobs with shortcut keys (we think of the Sauter SPI4462B), the WLB5860AL does not allow the user to modify the presets: we will have to make do with what we have!

The Whirlpool WLB5860AL induction hob is far from being the fastest to heat 3 liters of water from 25°C to 100°C. Indeed, in boost mode, it has already taken 9 min 30 s to reach a first level of 95°C. And you have to add another 60 seconds to finally get to the boiling point. Aggravating circumstance, the boost stops automatically after 5 minutes of use. It is therefore necessary to stay nearby to re-engage it, at the risk of seeing the wait lengthen before you can finally immerse the pasta in boiling water.

But, as they say in Rome, Chi va piano, va sano. And it must be admitted that the management of low temperatures of the WLB5860AL is exemplary. Indeed, after two hours of cooking on the small inductor at minimum power, we noted a temperature of exactly 50°C at the bottom of the container. This performance makes it a perfect model for pastry cooks, since melted chocolate deteriorates and loses its qualities when it exceeds 55°C. You can therefore leave your saucepan on the stove without any risk.


Good point, the heat is evenly distributed in the utensils when using the large hearth, as shown in the thermal snapshot above. You will of course have to stir the pan from time to time to avoid having hazelnut potatoes that are overcooked on one side and undercooked on the other, but a steak will be cooked evenly without having to move it too often. which does not spoil anything, the small inductor of the WLB5860AL also shows good dispositions, even if the edges of our stove are necessarily colder than the center. To cook successfully, all you have to do is adapt the size of the utensils to that of the cooking zones.

Temperature uniformity of the combinable zone of the Whirlpool WLB5860AL induction hob.


On the other hand, the use of the twinned zone is more questionable. The thermal pictures show very hot zones just under the inductors and much colder ones between the two. If this distribution of heat is not a problem for a dish in sauce that simmers in a large pot, we are more circumspect about the use of a fish cooker or a plancha. In the first case especially, there is a risk of having a fish that is almost raw in its center and overcooked at its extremities, unless it is moved very frequently.

When the Whirlpool WLB5860AL is pushed to the maximum of its possibilities, it develops a power of 5570 watts. Very surprisingly, this makes it possible to use all the inductors at the same time. Not all plates are capable of this performance.

The boil test showed us that the WLB5860AL used 0,37kWh to heat 3 liters of water from 25°C to 200°C, so it doesn't really stand out — for good or bad though. elsewhere — from the other plates in our comparison.

The Whirlpool WLB5860AL is one of the least discreet hobs in our comparison. When the four inductors are used simultaneously in boost mode, you can clearly hear the crackling of the electric current in the copper coils and the sound level then reaches 55 dB(A). Admittedly, this is still not enough to cover the noise of a normal conversation (60 dB (A)) but this model is a little too loud for our taste, especially in a quiet kitchen.

Intimidating at first glance, the WLB5860AL induction hob is ultimately quite pleasant to handle. But it shines above all with its management of low temperatures which could not be better. If it is easily forgiven for an automatic mode that is ultimately impractical, it is however difficult to ignore its slowness in boiling water, yet one of the strong points of induction hobs.