With Mesh for Teams, Microsoft is fully in the metaverse 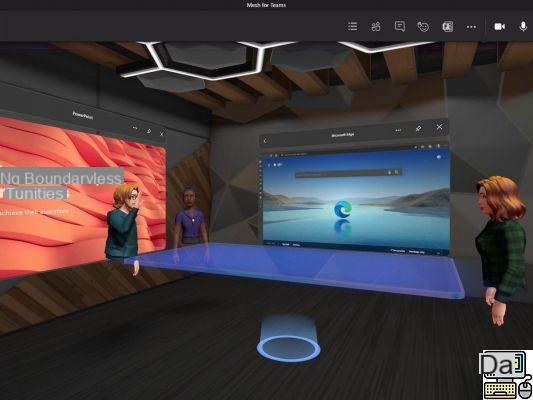 Mark Zuckerberg dreams of being a great progenitor of the metaverse, which had the gift of making Microsoft react, which wants to revolutionize the way of collaborating remotely in companies in Teams. It's called Mesh and is coming in 2022.

A Teams meeting room in the metaverse. © Microsoft


Facebook is now called Meta and has made the metaverse (metavers in Spanish) its new raison d'être. Mark Zuckerberg thus wants to be at the heart of the creation of this new, more embodied Internet, with a great deal of virtual and augmented reality. A major announcement that did not fail to react to other giants in the sector, starting with Microsoft, which has multiplied announcements in this area.

The first of its products to benefit from this is none other than Teams, its online productivity suite, which will integrate Mesh, a collaborative platform based on virtual experiences. The idea is simple: combine Microsoft's mixed reality technologies (including those integrated into its HoloLens headset) to enrich meetings and other videoconferences, thanks in particular to the addition of avatars. A bit like living your work remotely by embodying a video game character. Was this, then, the ultimate stage of serious gaming?

Microsoft is giving itself just over six months to turn this promise into reality and plans to deploy Mesh within Teams during the first half of 2022. According to company executives, the timing is ideal to offer these kinds of solutions, at a time when the pandemic has forced the adoption of teleworking wherever possible and when the return to “normal” will generally take place on a hybrid model, alternating face-to-face and distance learning. With Mesh, Microsoft hopes to make interviews more lively and find a remedy for the fatigue caused by repeated meetings all day long in video.

Of course, Microsoft knows that the adoption rate of virtual reality headsets remains very low and Mesh's 3D avatars can be used without such headsets or goggles. They will be available in 2D or 3D, in animated versions or not, and can be used by participants in a meeting who do not wish to turn on their webcam or display a photo of themselves. Animated in 3D, these avatars can adopt different postures and facial expressions representative of the employee's state of mind, while moving when the latter expresses himself to “create a feeling of real exchange”.


Finally, Microsoft explains that each company using Teams will be able to create its own working universe for Mesh. Virtual meeting rooms, provision of documents and information, team management, etc., are all elements that will eventually be materialized in 3D in the Microsoft Teams metaverse. A point that Microsoft says it has mastered because, without having access to all the tools designed for Mesh, its human resources department has already been able to experiment with solutions of this kind during the pandemic in order to enrich the link with remote teams. or successfully welcoming new employees.


Metaverse and video games, Satya Nadella believes in it

Very clearly, when it comes to metaverse, Microsoft seems to want to adopt a strategy geared towards the professional world and productivity. But this is not the only path considered by the software publisher whose boss, Satya Nadella, explained to Bloomberg that he is also focused on the metaverse applied to video games and the Xbox universe. “You can absolutely expect us to do things in games […] If you take Halo as a game, it's a metaverse. Minecraft is a metaverse, just like Flight Sim. In a certain sense they are 2D today and the question is whether you can move to a 3D world now. We absolutely intend to do so,” he said.

A quote inevitably very commented, in particular by the ironic players who thought that the games mentioned were “already in 3D”. Remember that if Minecraft in virtual reality is done, Minecraft Earth, a mobile version in augmented reality, was quickly abandoned for lack of success. And when Microsoft evokes virtual worlds populated by avatars that interact for fun, one wonders if the company is not on the verge of inventing MMOs.

Audio Video With Mesh for Teams, Microsoft is fully in the metaverse
With One UI 4, Samsung will transform your Galaxy smartphone into an iPhone ❯

add a comment of With Mesh for Teams, Microsoft is fully in the metaverse