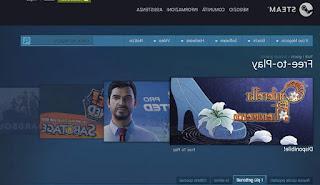 Steam is the most used video game distributor in the world, an online store with a catalog that far exceeds 10.000 titles, growing almost exponentially.
The problem, with such an abundance of games, is find the most beautiful ones, the ones that are worth downloading, buying and installing.
Fortunately, the SteamPowered Store site offers all the tools to do targeted searches and discover the best titles, including free ones which have a separate list.

First of all, the section to click on the left side of the Steam main page is that of special offers.
Once you have opened the Offers page, where the games with discounted prices are located, click on the right side on the word games to exclude expansions, software, demos and extra content, in order to view only full games.
At this point you can sort games by user reviews, in order to find those with extremely positive reviews from Steam users.
To narrow the list even further it's worth using the filter on the right to view only those of a certain category and to filter them by the number of players, depending on whether you want a multiplayer or single game.


To find the best free games on Steam of the moment you have to go to the "Free To Play" genre section by going to sort the list according to the most popular. Among these we find, in particular, some very famous and popular game titles for several years now, as well as some news, including:

1) Counter-Strike: Global Offensive is a great team shooter game, one of the most played in the world, with very high level 3D graphics.

2) Destiny 2, champion of 2020, still with many players ready to challenge each other in a first person shooter set in space.

3) Apex Legend, the most played Battle Royale game in 2021, following the release of the free PC version.

4) Dota 2, one of the most played multiplayer games in the world, a very competitive mix of strategy and action, with many heroes competing in battlefields, in 5 vs 5 teams.

5) Warframe a fighting and action game also in in your languagen, based on missions to be played in third person with other players.

6) World of Warships one of the most downloaded and played games in the world, where you play in a naval war against other players.

9) Team Fortress 2, since 2011 one of the most popular and funniest games that can be played for free in a wild and adrenaline-pumping multiplayer mode.

10 ) Brawlhalla, one of the funniest multiplayer games, with side view and 2D fighting between 8 players together.

add a comment of Best free games on Steam in 2021