How to recover deleted WhatsApp messages without Android backup 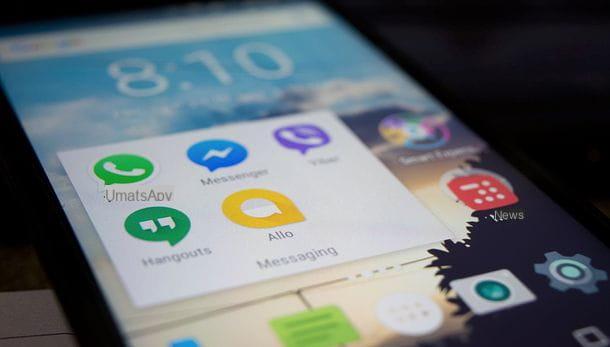 If you want to recover deleted messages from WhatsApp and you don't have a backup at your disposal, you can rely on some app for Android that examine the memory of the smartphone (or the SD installed inside it) and try to recover the chats that have not yet been overwritten by other data.

The applications in question are all very simple to use, but unfortunately they have a "defect": they only work if the device has been subjected to root procedure. If you do not know, the root is a procedure by which you unlock the administrator permissions on Android and then you get the ability to perform operations that would not normally be allowed (such as, precisely, the recovery of deleted data). I told you about it in more detail in my tutorial on how to root Android.

Another important thing to specify is that the installation of new apps on the smartphone could lead to the overwriting of the memory portions on which the messages you want to recover were hosted, paradoxically leading to their definitive cancellation. In theory, it would be preferable not to perform any operations on the phone until you can retrieve the messages of interest to you, but you don't have much choice in this regard. In order not to "touch" the memory of the mobile phone, you could try the PC solutions that I will talk about in the next chapter of the tutorial but, I warn you, they are more cumbersome and expensive to use than the Android apps: the choice is yours.

So, is everything clear so far? Well then let's not get lost in chatter anymore and take action by seeing which apps they can use for recover deleted WhatsApp messages without Android backup. 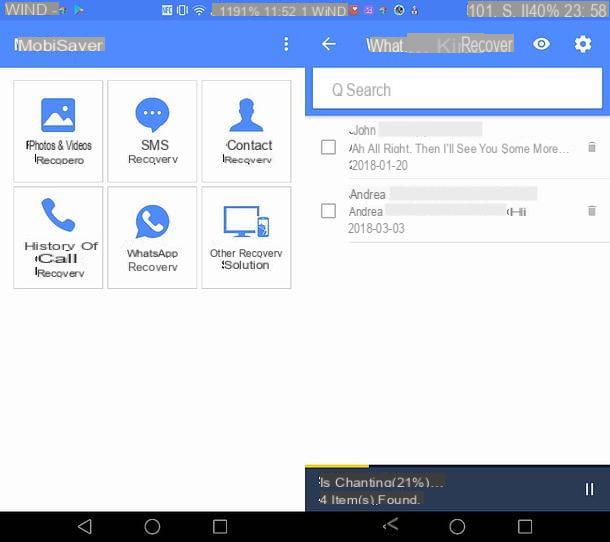 Among the various data recovery apps I have tried, EaseUS MobiSaver is the one that allowed me to get the best results: it managed to recover the conversations I had deleted from WhatsApp and show them to me in their entirety. The application can be downloaded and used for free, however to restore the chats and make them appear again in WhatsApp it is necessary to make an in-app purchase of € 6,49. If you do not make the purchase, you can consult the content of the chats but not restore them within WhatsApp.

Having made this necessary clarification, let's take action. First, open the Play Store page dedicated to EaseUS MobiSaver and first press the button Install e poi quello Accept to proceed with the app installation. At the end of the procedure, start MobiSaver, press the button WhatsApp Recovery present in its main screen and grant root permissions to the application by replying Conceded to the warning that appears on the screen.

At this point, wait for the smartphone memory scan to be completed (it shouldn't take long) and you will be shown the list of WhatsApp messages that can be recovered. To view the content of a chat, all you have to do is press on it. To restore it, instead, you have to select it using the appropriate box on the left, then you have to press the button Recover which is located at the top and you must unlock the full version of EaseUS MobiSaver by making the in-app purchase that is proposed to you. 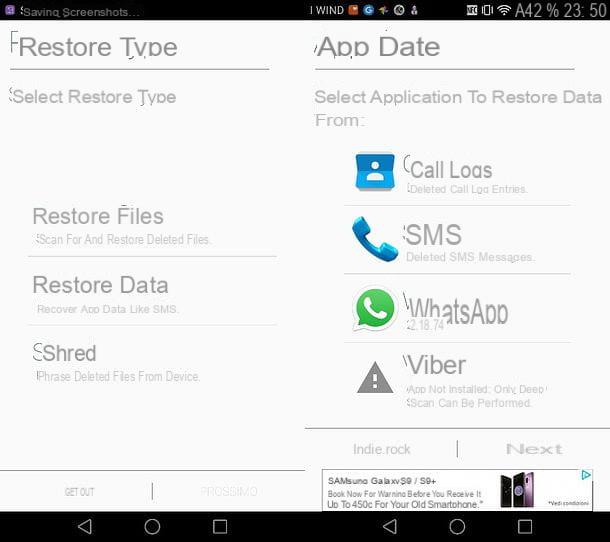 If EaseUS MobiSaver cannot find the messages you deleted from WhatsApp, you can try Undeleter: a data recovery app that allows you to restore various types of deleted files (photos, videos, etc.) and to recover app data, including WhatsApp. In my tests it did not behave very well: it was unable to "see" the chats that EaseUS MobiSaver managed to recover but, as they say, trying doesn't hurt. On the other hand, the application is free: you can download and use it at no cost, its only limitation consists in the display of an advertising spot of about 15 seconds before data recovery (this limit, however, can be removed by purchasing the full version of the app for 4,99 euros).

To download Undeleter on your smartphone, open the Play Store page dedicated to the app and first tap the button Install and then Accept. When the download is complete, start Undeleter, press the button Next and grant root permissions to the app by replying Conceded notice that appears on the screen. If a box appears with the inscription License Agreement, close it.

At this point, tap the button again Next, scegli l'opzione Restore data, select the icon WhatsApp from the screen that opens and wait for a complete check of the smartphone memory to be performed. At the end of the procedure, if there are recoverable messages, select them and use the icon floppy disk (top right) to save them.

As already mentioned above, the installation of new apps on the smartphone could lead to the overwriting of the portions of memory on which the messages to be recovered were hosted. To prevent this from happening, you can connect the phone to the computer and use some data recovery programs available on Windows and macOS. 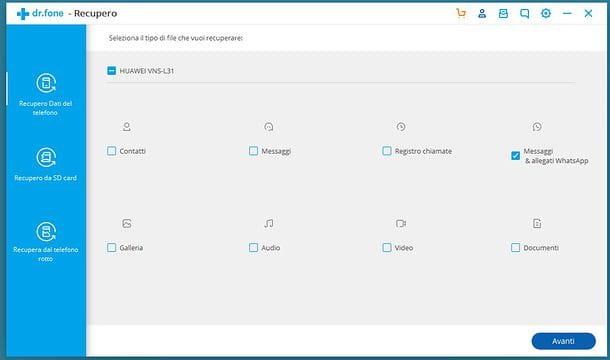 Wondershare dr.fone is one of the most popular - and most comprehensive - mobile data recovery software. It is compatible with both Android and iOS and is available for both Windows and Mac computers. It has prices starting from 79 euros + VAT (except for promotions), but it can be downloaded in a free demo version that shows the user the data that you would be able to restore with its full version.

To download dr.fone for Android devices, connected to the official website of the program, select the tab Windows version o Mac version (depending on the operating system installed on your computer) and click on the button Download relating to Android.

To download completed, a PC Windows, start the file DrFoneForAndroid.exe you just downloaded and, in the window that opens, click on the button first Yes and then OK. Then put the check mark next to the item I accept the terms of the license agreement and finish the setup by first clicking on NEXT three consecutive times and then on end. If, on the other hand, you use a Mac, april il dmg package which contains dr.fone, drag the program icon to the folder Applications say macOS and il gioco è fatto. 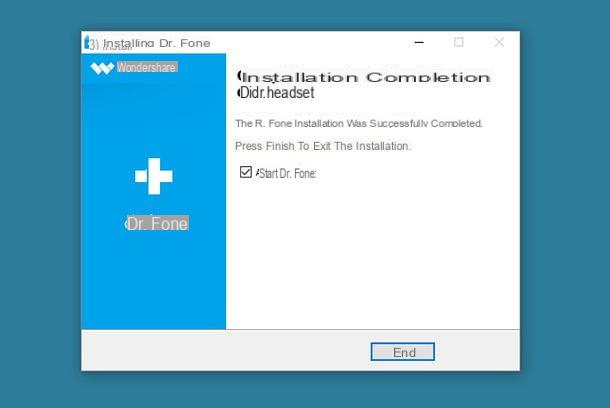 At this point, take your smartphone and activate the function USB debugging on the latter. If you don't know how to do it, go to the menu Settings> Developer options and put the check mark next to the appropriate option. If the “Developer options” menu is not available in the Android settings, activate it by going to the menu inSettings> About phone and tapping the item for 7 consecutive times Build version or your voice Serial number.

After this step too, connect the smartphone to the computer, start Dr.foneclick on your button Recovery present on its home screen and wait for communication between the two devices to be established. At this point, put the check mark next to the option WhatsApp messages & attachments, pig sul sul bottone NEXT and wait for a preliminary analysis of the device to be performed.

If you are asked to grant the root permissions to dr.fone and your smartphone has been rooted, perform the operation. Otherwise click on first Try again and then Start to start scanning the phone's memory in non-root mode (which will give less accurate results than with root enabled).

When the search is complete, select the item WhatsApp from the sidebar of dr.fone and you will be shown the list of recoverable messages. 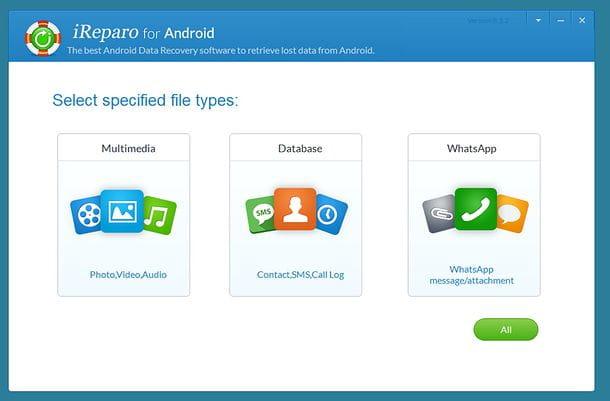 If dr.fone fails to meet your expectations and / or seems too expensive, you can turn to some alternative solutions: now I propose a couple of the most interesting.

How to avoid deleting messages in WhatsApp

At this point of the tutorial, I hope you were able to solve your problem and recover deleted messages from WhatsApp even without backup. Before I leave you, however, I want to give you a couple of tips to prevent a situation like the one you found yourself in a few minutes ago from happening again. 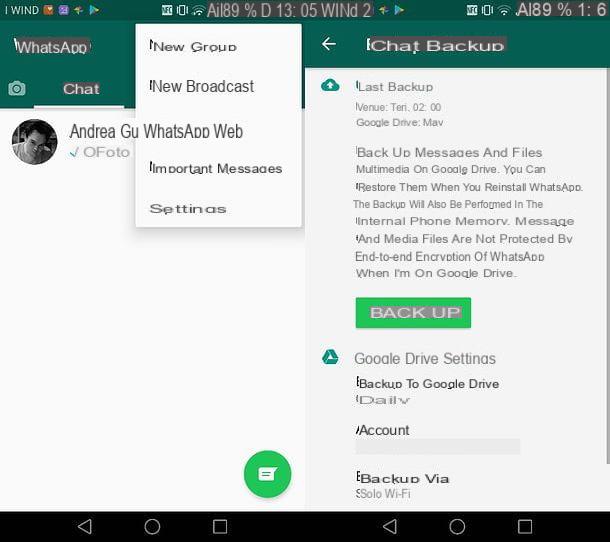 As trivial as it may seem, the most effective way to avoid losing important messages in WhatsApp is to take advantage of the backup function included in the app, which saves a safety copy of the messages and files contained in the latter both locally and on the cloud, on Google Drive.

To activate the WhatsApp backup function, start the application, select the tab Chat, press the ⋮ button located at the top right and select the item Settings from the menu that opens. In the next entry, go up Chat, Then Backup of chats and imposta l'opzione Backup to Google Drive su Daily. Then select yours Gmail account from the box that opens, answer Allow the notice that appears on the screen and that's it.

From this moment on, WhatsApp will automatically save a backup of chats and attachments on Google Drive and on the smartphone memory. To also include videos in the backup, put the check mark next to the item Include videos located at the bottom of the screen. To manually start the creation of a backup, instead, tap on the button Back up.

If any step is not clear to you and / or you want more information on how to backup WhatsApp, consult my tutorial dedicated to the topic.

Use apps that save WhatsApp history 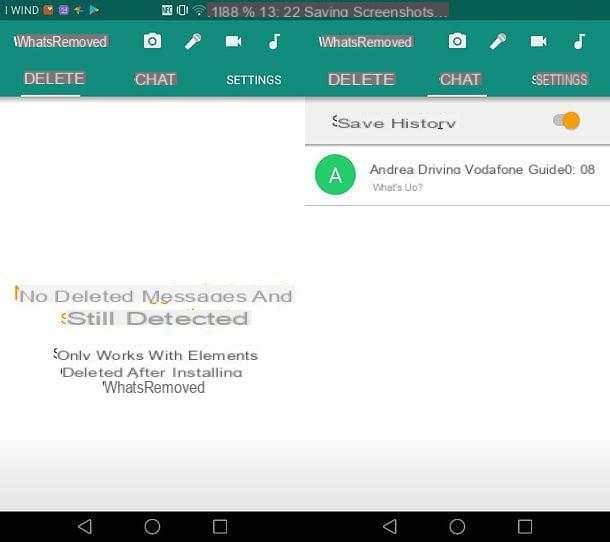 If you want, you can also rely on apps that record the history of conversations on WhatsApp and "capture" all notifications relating to the app. I tell you right away that they are not the best from the point of view of privacy: applications of this kind could intercept all notifications and capture the information present in them, but for careless types like you they could be useful.

Among the apps that allow you to monitor notifications and WhatsApp history, I would like to point out WhatsRemoved, which is completely free and is available directly on the Play Store. To use it, after downloading it on your smartphone, start it, follow its initial tutorial and press the option Detect deleted messages and their files (recommended).

After this step too, you can open the application and find the WhatsApp conversation history in the tabs Chats ed Eliminated (where messages deleted from WhatsApp will be hosted). As easily understood, WhatsRemoved will be able to capture, and then retrieve, only the chats made after its installation on the phone.

How to read Whatsapp messages without logging in

How to connect your phone to WhatsApp

How to save WhatsApp chats

How to install Whatsapp on Android

How to pay for Android WhatsApp without a credit card