CAN'T FIND THE ITEM YOU ARE LOOKING FOR?

How to send GIFs on WhatsApp

To the delight of many users and the displeasure of many others, WhatsApp has decided to officially introduce support for animated GIFs: those images, very popular on the Web, which show a short looped animation (i.e. continuously) and which we find more and more often on forums, social networks and in messaging applications, such as WhatsApp.

To share a GIF on WhatsApp you can follow various ways: you can save a GIF in the roll of your smartphone and send it as a simple photo, you can share a GIF from another application installed on your phone or - and here the matter is done really interesting! - you can cut a scene from a video and create a GIF based on it.

In short, there is only to be spoiled for choice, so I would say not to get lost further in chat and to discover immediately how to send GIF on WhatsApp step by step. The procedure is feasible on all Android terminals and iPhones, just have the most recent version of WhatsApp installed on the phone. At the moment, Windows Phones remain out and can only receive animated GIFs but not send them (they are shared as static images).

How to use GIFs in Whatsapp for Android

If you have a smartphone Android, can send GIFs on Whatsapp basically following two ways: by posting a GIF that you have saved in your phone roll, by sharing a GIF from an external app or by extrapolating a scene from a video. Here are in detail all the steps you need to take.

Use GIFs downloaded from the Internet

The simplest way to share a GIF on WhatsApp is to download it from the Internet, save it to your Android roll and then send it to your interlocutors as a normal photo.

To download a GIF from the Internet, all you have to do is view it in the browser (eg. Chrome), keep your finger pressed on it for a couple of seconds and select the item Save immagine give the menu to compare. 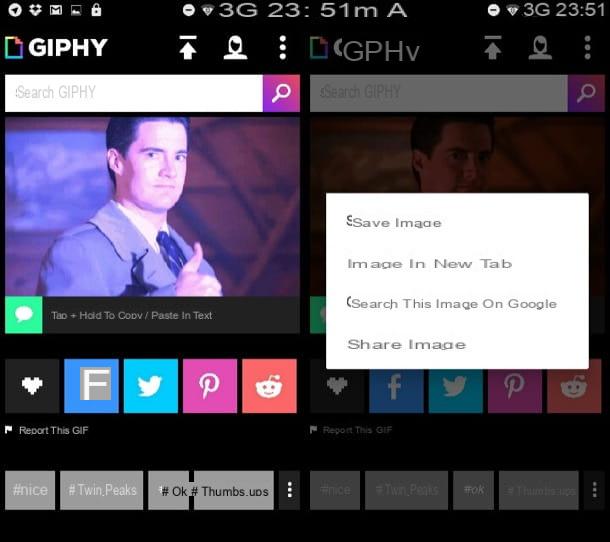 Once you have the GIF to share on WhatsApp, open the conversation in which you intend to use it (it can be a single conversation or a group chat) and first "tap" the icon of the clip located at the top right and then on the option Gallery in the menu that appears.

Next, select the tab GIF, go to the folder where you have saved the animation you want to share on WhatsApp (eg. Download o Giphy) and select the animated GIF of your liking. Therefore, type a caption with which to accompany the publication of the image (if you want) and press the icon of arrow located at the bottom right to confirm sharing the GIF. 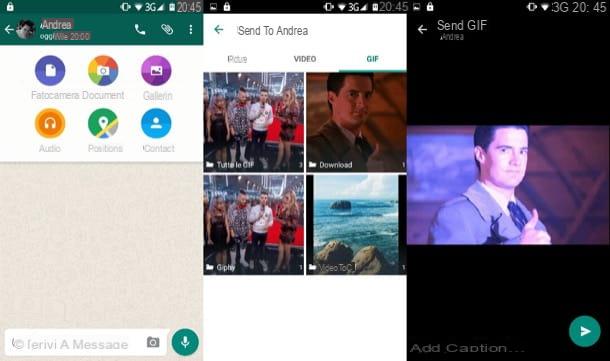 The recipients of the image will see a static preview of the GIF and, by pressing on it, they will be able to view the animation in loop (regardless of the smartphone and the operating system used).

If sharing GIFs from Android's roll seems a bit too cumbersome, you can install applications like GIPHY that allow you to search and download GIFs via a dedicated search engine.

To share a GIF in WhatsApp from GIPHY, all you have to do is select the image you prefer the most and press the button first (...) present in the screen that opens and then on the icon WhatsApp which appears below. 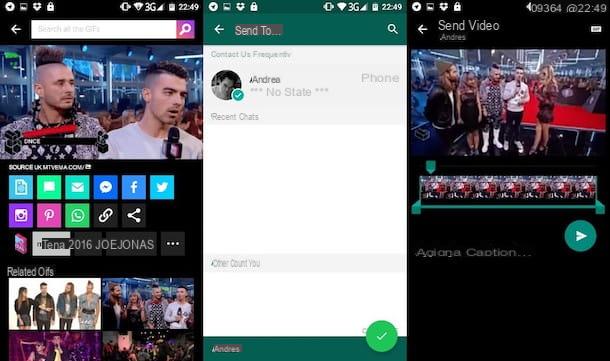 Have you shot a video with your smartphone and would like to extrapolate a scene from it to turn it into a GIF to share on WhatsApp? Nothing easier, believe me.

Open the conversation in which you want to share the scene from your video, press the icon of clip collocata in alto a destra e seleciona la voce Gallery from the menu that appears. At this point, select the folder where the movie you want to transform into GIF is located (eg. All videos) and "tap" on the thumbnail of the movie.

Then use the indicators on the video timeline (below) to reduce the duration of the movie to one maximum of 6 seconds, presses the icon of camera which appears at the top right (so that it turns into the inscription GIF), type a caption with which to accompany the animation (if you want) and press the icon of arrow located at the bottom right to share your GIF. 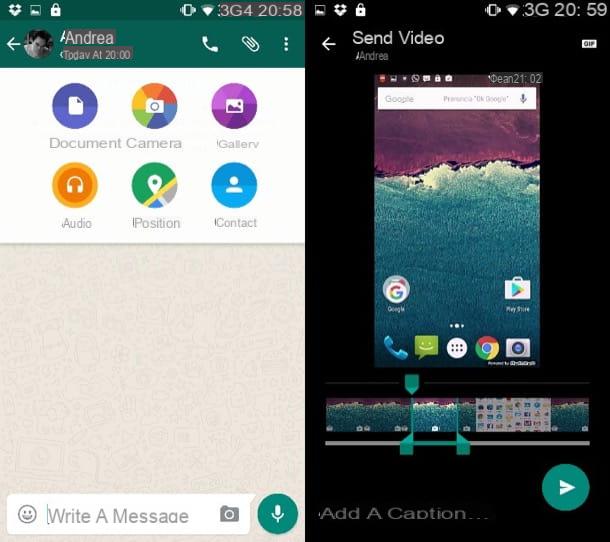 Please note: the same procedure can also be followed with videos downloaded from the Internet and saved in the Android roll.

How to use GIFs in Whatsapp for iPhone

You have a iPhone? No problem, GIF support has also arrived in WhatsApp for iOS. And even in this case you can share animations in chat following different ways: selecting a GIF from the iPhone roll, sharing GIFs from external applications or extracting a scene from a video. Let's see together how to proceed.

Use GIFs downloaded from the Internet

Just like on Android, even on iPhone the easiest way to send GIFs on WhatsApp is to download them to your phone's roll.

Then open Safari, connect to the site hosting the GIF of your interest and download the animation on your iPhone by holding your finger on it and selecting the item Save immagine give the menu to compare. 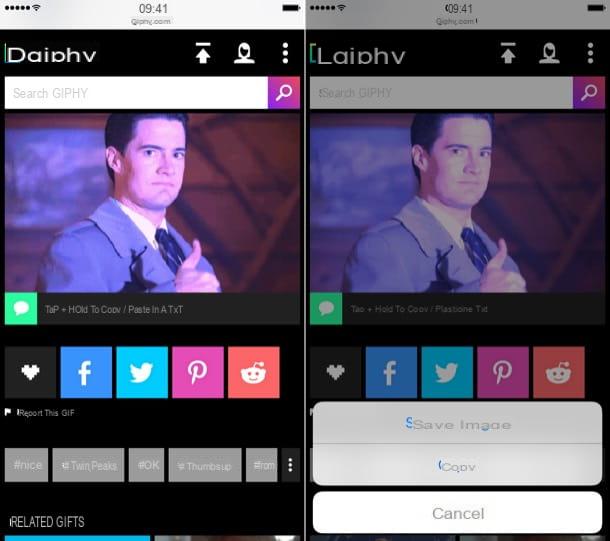 Once you have saved the GIF of your interest, start WhatsApp, open the discussion in which you want to publish the animation (which can be a single chat or a group chat) and first "tap" on the button capacitor positive (+) lead placed at the bottom left and then on the item Photo and Video Library Present on the menu if you press.

At this point, select the GIF from the iOS roll (which will have the wording on its thumbnail GIF) and decide whether to customize it with the editing tools included in WhatsApp for iOS (top right) or leave it as it is. Finally, type a caption with which to accompany the image (if you want) and press the icon of arrow located at the bottom right to share the GIF. 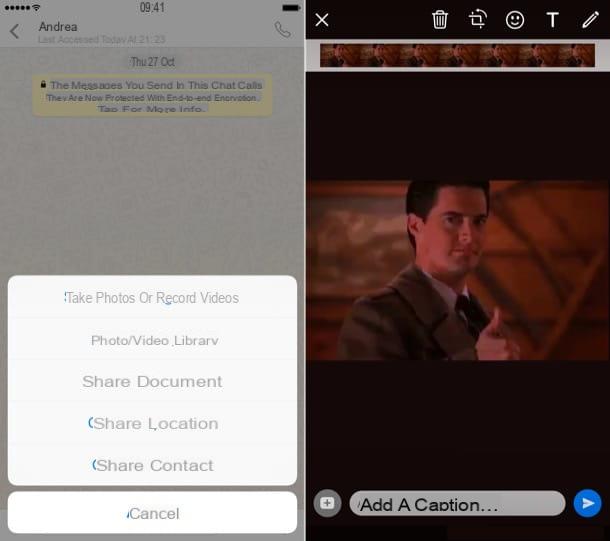 Your interlocutors will see a preview of the GIF which, if pressed, will start the animation in loop. The animation will be visible not only from iOS, but also from Android and Windows Phone.

Alternatively, if you prefer, you can install an application like GIPHY and share GIFs on WhatsApp directly from it. In case you have never heard of it, GIPHY is a search engine for animated GIFs that allows you to easily find, download and share animated GIFs of all kinds.

To share a GIPHY GIF on WhatsApp, locate the GIF of your interest within the application, select its thumbnail to view it in full size and first press the button (...) and then on the icon of sharing (the arrow that goes up).

Then "tap" on the icon WhatsApp from the menu that opens, put the check mark next to the name of the person with whom you want to share the image (or next to the name of a group), press on Send, customize the GIF with the editing tools included in WhatsApp (if you want) and press on arrow at the bottom right to post the animation on WhatsApp. 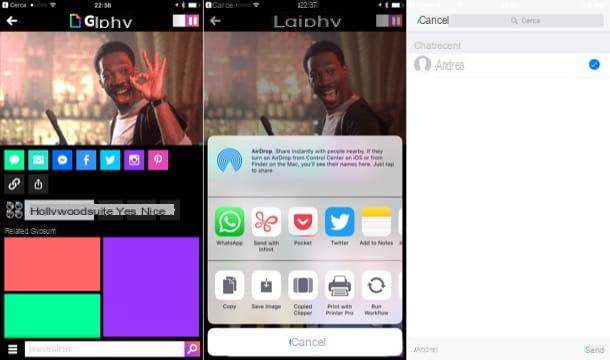 The same procedure can also be followed with iCloud Drive and other applications that have introduced support for sharing GIFs on WhatsApp. Just select a GIF, press the icon of sharing and select WhatsApp from the menu that opens. The apps that have not yet introduced the sharing of animated GIFs (eg Dropbox, at the time of writing) allow you to send GIFs on WhatsApp only in the form of static images.

Now let's see how to extrapolate a scene from a video and share it on WhatsApp in the form of an animated GIF. The procedure to follow is extremely simple.

The first step you need to take is to open the WhatsApp conversation in which you want to share the sequence, then you have to press the button capacitor positive (+) lead located at the bottom left, you have to select the item Photo / Video Library from the menu that opens and you have to choose the movie from which to extrapolate the scene to be transformed into GIF. The video doesn't have to be very long, let's say it has to be less than 1 minute, otherwise you won't see the option to turn it into GIF.

At this point, use the two indicators present on the video timeline to crop a scene of a few seconds, press the button GIF that appears on the screen and choose whether to customize the sequence just "cropped" using the other editing tools present in WhatsApp: writings, emoticons, etc. 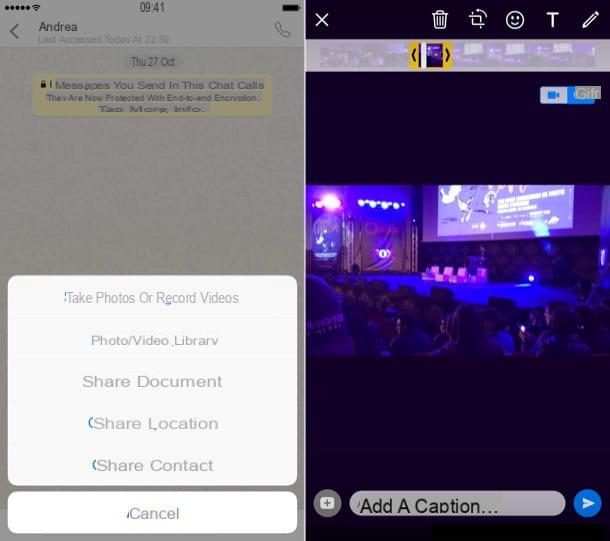 Finally, choose whether to add one caption to the GIF and presses on arrow located at the bottom right to share it in the WhatsApp chat.

The sequence you selected will be shared in the WhatsApp discussion in the form of a GIF. To view the animation in loop it will be necessary to press on its thumbnail (as for GIFs shared from the roll or from external apps).

How to send location on Whatsapp ❯

How to always be online on WhatsApp

How to enter your number on WhatsApp

How to recover blocked messages on WhatsApp

How to put music video on WhatsApp status

Add a comment from How to send GIFs on WhatsApp

97%
Our users have valued with this percentage the resolution of the problems that have been found when consulting this article.

Check the questions of our users and the answers of our experts.
About us